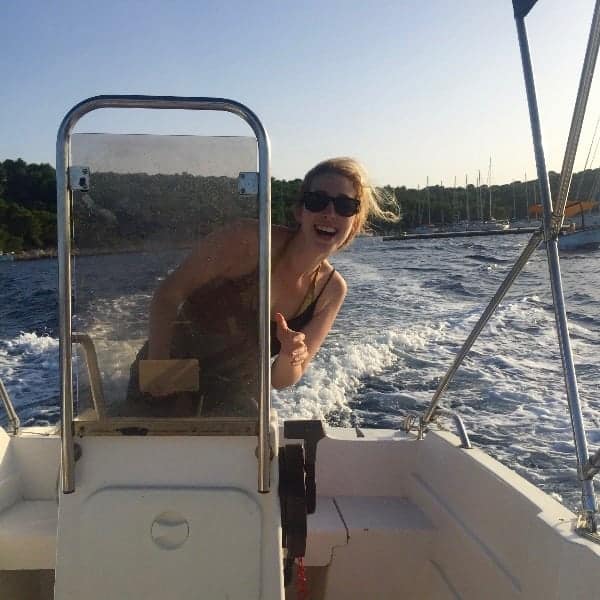 Stranded In The Ocean While Renting a Boat in Hvar Island, Croatia

Rent your own boat and drive around to private beaches all day? Sounds like a pretty outstanding idea to me! I had heard from many people who had been to Hvar, Croatia before, just how incredible it was to rent a boat for a nominal amount of money and drive that boat around secluded islands. So, my boyfriend and I followed the crowd, and did as suggested.  After renting the boat, we headed out on the open water loving life and snapping pictures thinking that we were way cooler than we actually were driving this boat all on our own.

We decided to first visit a private beach that the boat rental store had suggested.  As we approached the beach, we dropped down the anchor and I immediately jumped in the water…I may or may not have had to pee.  We splashed around in the water and relished the fact that we were swimming in the middle of the ocean in Hvar, Croatia all by our lonesome.  Such a dream! 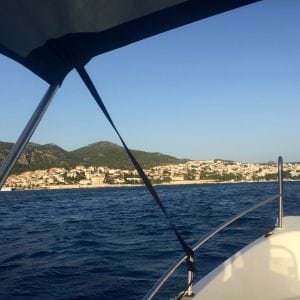 All of a sudden, we looked at the boat and noticed that the anchor didn’t really seem to be in its proper place. The boat was slowly rotating around 360 degrees.  To this day, I don’t know if the boat was anchored correctly; but, I think it is pretty safe to assume that since it was circling around itself…probably not.  We decided that instead of having our boat sail away while we were stranded in the middle of nowhere, we should probably get back onto the boat to ensure that it was anchored down properly.  Easier said then done. (this is where Jaws music would start playing if this were a film)

To get back into the boat you have to climb the ladder attached to the bottom of it, so we looked and realized — OH CRAP — the ladder was literally rusted in half.  When I say rusted, I mean the ladder folded in half like a flour tortilla you use to make tacos.  So my boyfriend hoisted me up into the boat which was great and all, but there was absolutely no way he was getting back on.  We devised an ingeniously flawed plan to get him on this boat because we did not really have any other choice if I wanted to ever see him again.  And truth be told, I did. 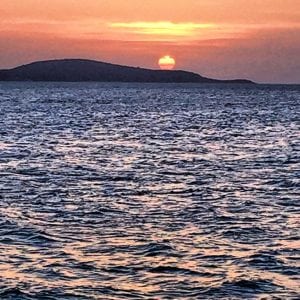 Our ingeniously flawed plan was as follows: He would swim to the edge of the island and stand on the rocks while I would de-anchor the boat and drive it toward the edge.  He could then jump in while I would try desperately not to scratch the motor.  Was this the smartest plan?  Let’s be real…probably not. But, it was our best bet at the time.

As my boyfriend swam ashore,  I pulled this super heavy anchor up from the bottom of the ocean and back onto the boat.  Oh by the way, I missed the “learn how to drive the boat” tutorial because I was hot and in a food coma and truthfully really just didn’t feel like paying attention. Oops.  While my boyfriend was explaining to me how to drive and reverse the boat and I was screaming because I didn’t know what I was doing, I managed to drive the boat forward with the front part of the boat toward the edge where he was standing.  The problem was that the front part was also the highest part of the boat and there was absolutely no way he was going to be able to jump that high.  Although now that I think about it, that might have been funny to watch him try.

So “take two” happened where I reversed the boat and then came in from the side and may or may not have scratched the motor while my boyfriend very ungracefully jumped for his life from the edge of this island. He belly flop -jump -dived (it was really a combination of them all) into the boat and landed safely on his stomach.  My main regret was not that we didn’t check the ladder before we drove away from the dock, but that I did not capture the greatest belly flop I have ever seen in my life on my camera.  Sadly, this story will just have to suffice.  My boyfriend had some scratches from the rocks at the edge of the island, but he was safe and we forged onward with our newly acquired boat skills and tried to enjoy the rest of our boating experience.

So that’s our boat story!  I really hope that this doesn’t detract from you renting a boat because it truly is a phenomenal experience.  Or at least I would assume so.  Just make sure your ladder doesn’t collapse like a folding chair before you head out on the open water.  For some tips on planning a trip to Croatia, check out my 10-day itinerary here.

Want to read more Travel Mishaps? Here are some of my favs:

Why Yes! You CAN Get Bug Bugs From A Bus

I Was Chased By A Bull In Spain

Has anyone else had an experience good or bad renting a boat in Hvar, Croatia?  Please share in the comments below!