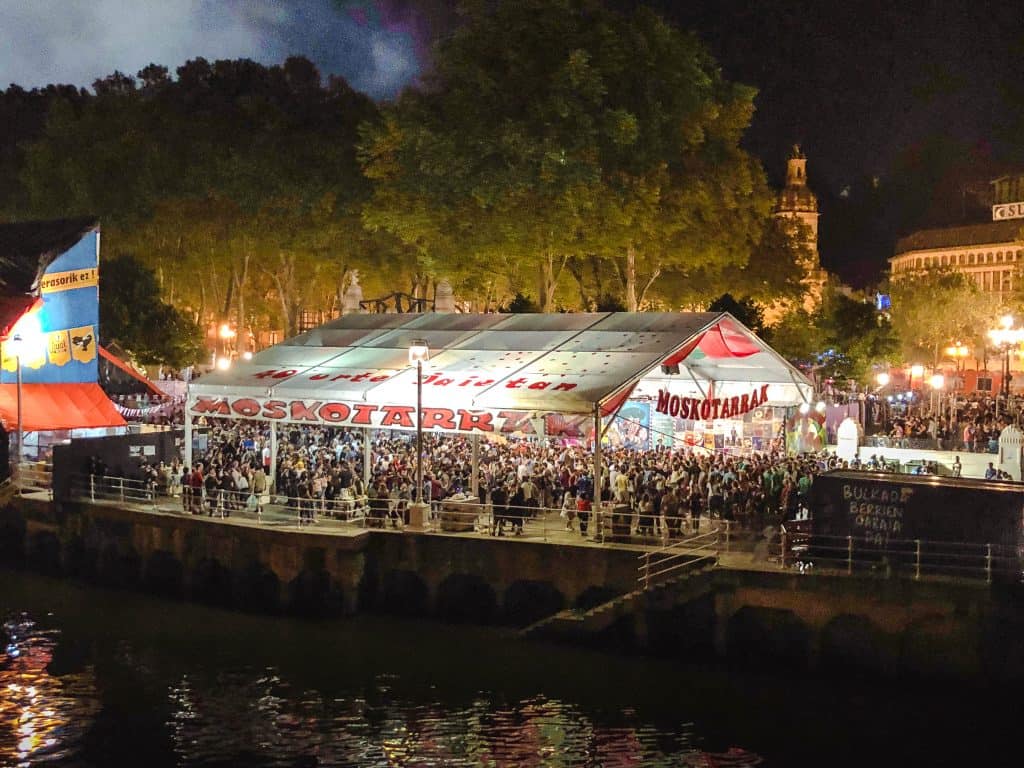 My favorite kind of trip? A trip to Spain to celebrate a cultural festival. When I realized that the dates of Semana Grande (Spanish) also known as Aste Nagusia (Basque) or Great Week (English) — this festival has as many names as a royal — could align with my trip to Bilbao, I made certain to move a few things around.

My bus from Madrid to Bilbao got me into the city right as the opening festivities began. I actually don’t recommend this at all; you should arrive earlier in the day or on a different day of the 9-day festival. Why? This also means that public transportation is shut down in the city center. I found this out after taking the EuskoTran from the bus station to the Guggenheim, which is a little ways outside the Casco Viejo or Old Town of Bilbao. I was ushered off the tram by the police who said this was now the last stop. The police were very kind, but they warned that I should walk the perimeter of the city and not through the center to get to my hostel. I had a suitcase and backpack with me and they were worried about overcrowding and pickpockets. I made it to my accommodation with no issue, but it would have been more convenient to arrive at a different time to avoid the extra hassle and excessive perspiration. 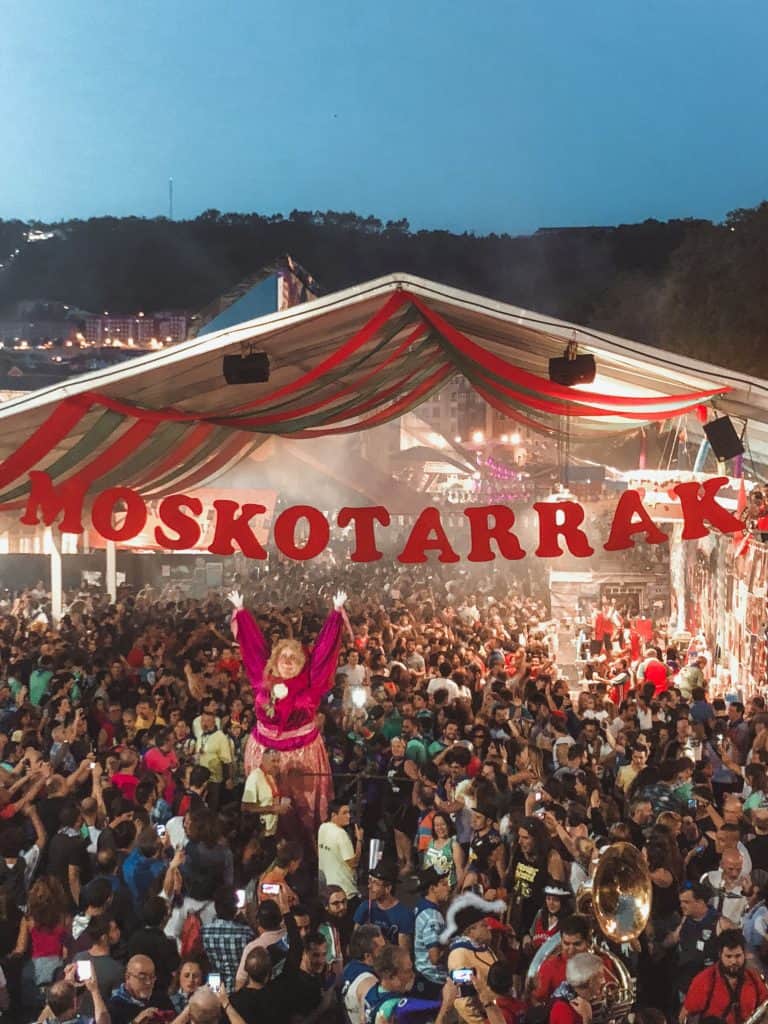 Semana Grande honors the Virgen de Begoña and is not only a celebration of religion, but also of Basque culture. At 6PM (18:00) on opening day — the first Saturday after August 15th — scores of visitors pour into the city standing ready to watch as a txupinazo rocket is shot into the sky. After the rocket firing, what follows is the culmination of events that form the biggest festival in Northern Spain. The festival’s mascot, Marijaia, makes her grand entrance onto the balcony of the opera house, Arriaga Theater, the main building on the square. Thousands of festival goers party all night to the noise of live music. All the while Marijaia’s hands are raised signaling that she is ready to dance and party. 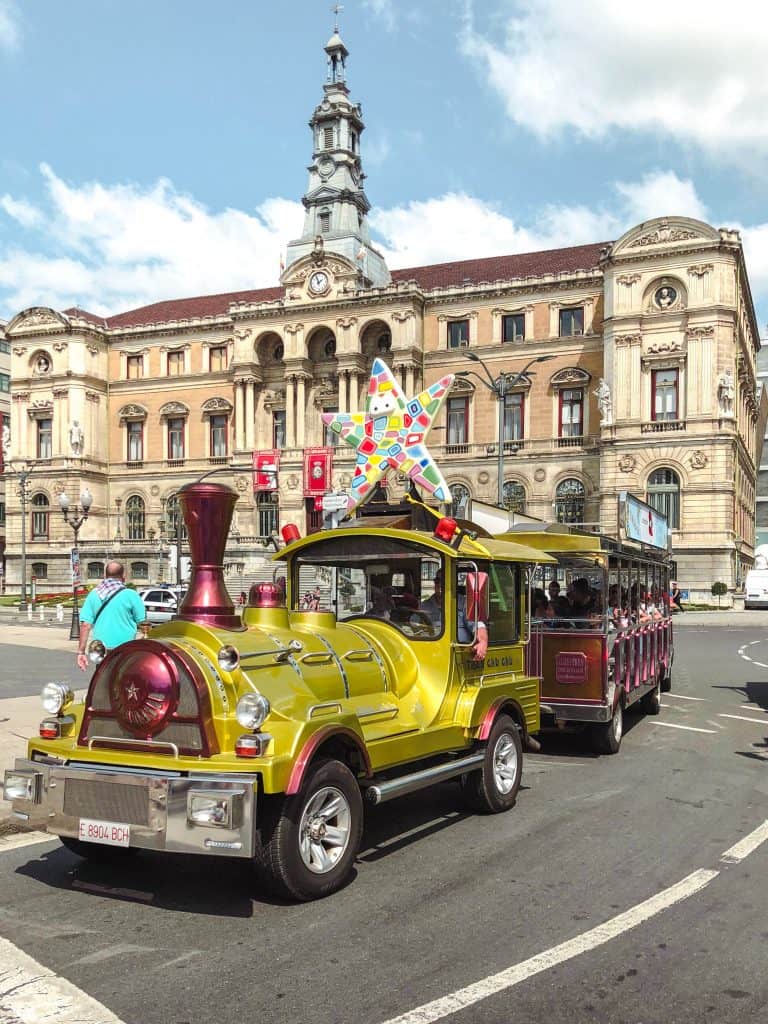 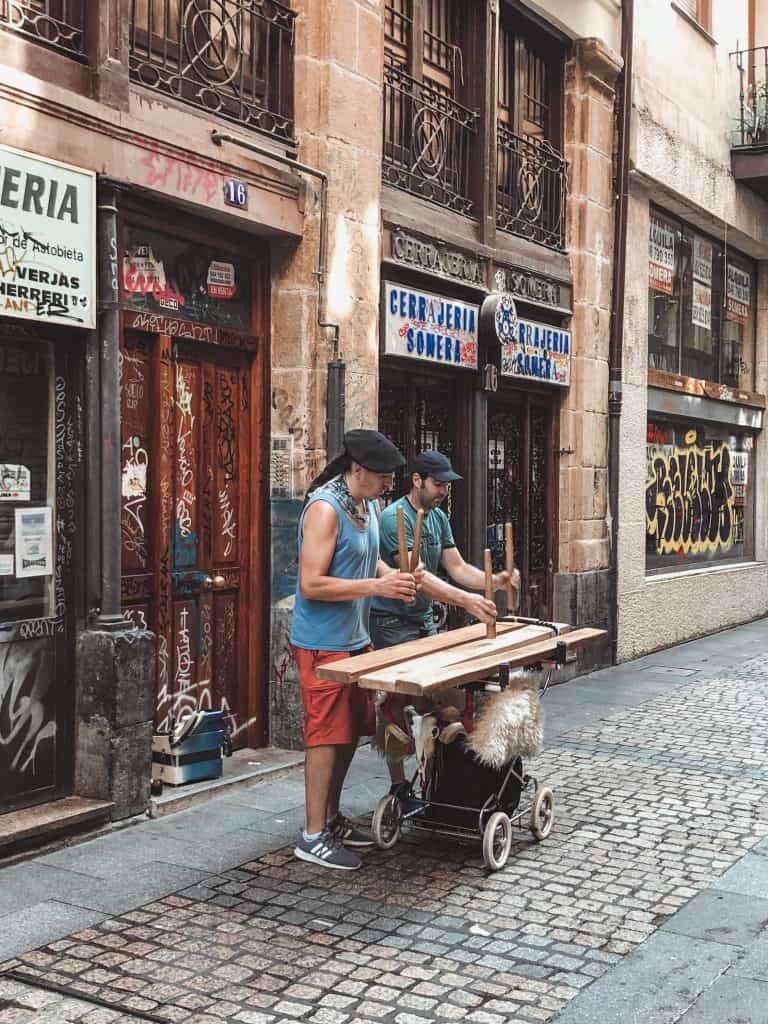 Undoubtedly, the most awe-inspiring moment of the festival happens each evening at 10:30PM (22:30) with an International Fireworks Competition. Every night, a different country or city is responsible for dazzling the crowd with their best pyrotechnic display. The winner of this global competition is announced on the last day with a final display of fireworks lighting up the night sky. The fireworks are so magnificent that you will be able to see them from most areas of the city, but I recommend following the crowds along the Nervion river to the bridges that connect the city. You won’t want to miss out any night, so make sure you plan your evening activities around the fireworks show! 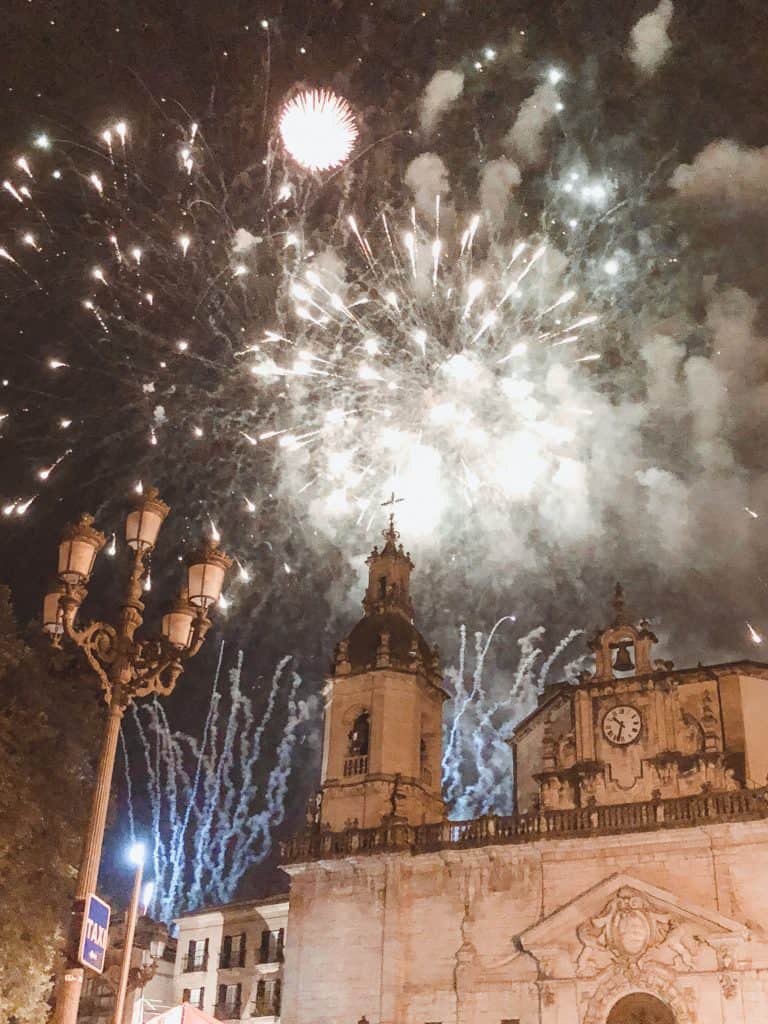 The next morning, I highly recommend going to the Bilbao Tourism office to get a copy of the festival schedule in English. I expect that some of the nicer hotels in Bilbao may have copies at the reception, but I found that there were a scarce amount of English programs, none of which were at the awesome hostel I stayed at during my four days in Bilbao, Quartier Bilbao. I also asked the tourism professional to circle which of the events were important each day and should not be missed. This was incredibly helpful and I highly recommend you do the same! I was able to report back to my hostel-mates, and drag some of them along to popular events that I never would have known about like the Fish Parade. 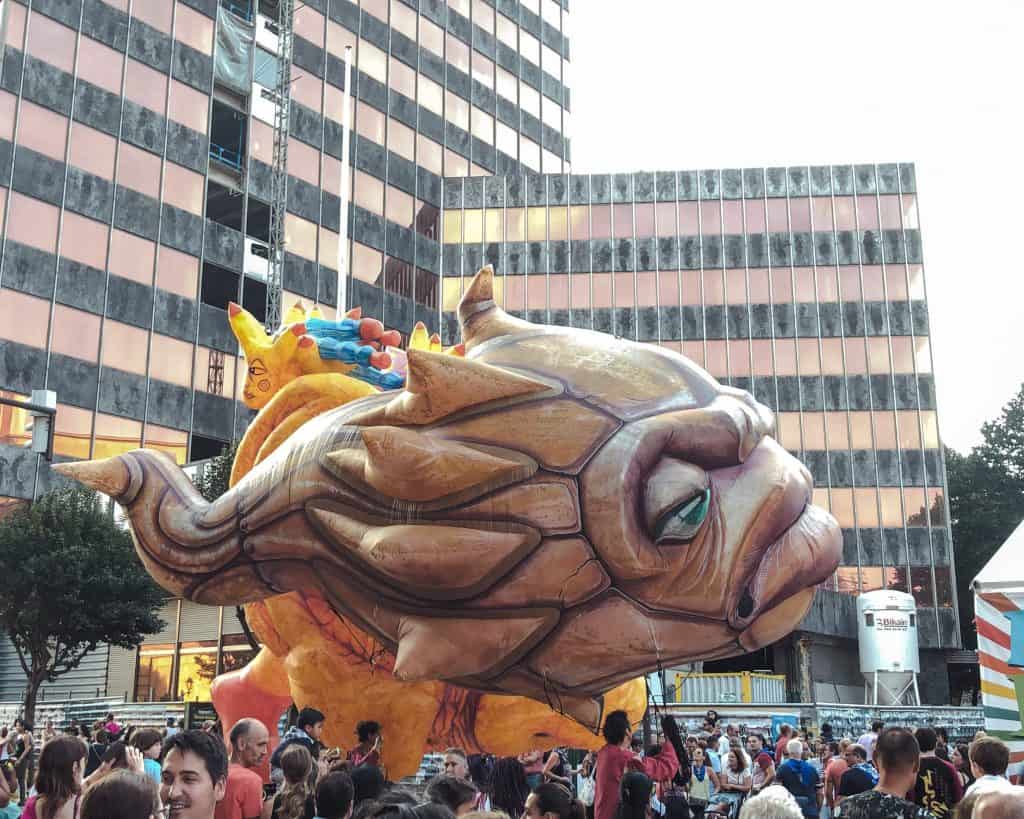 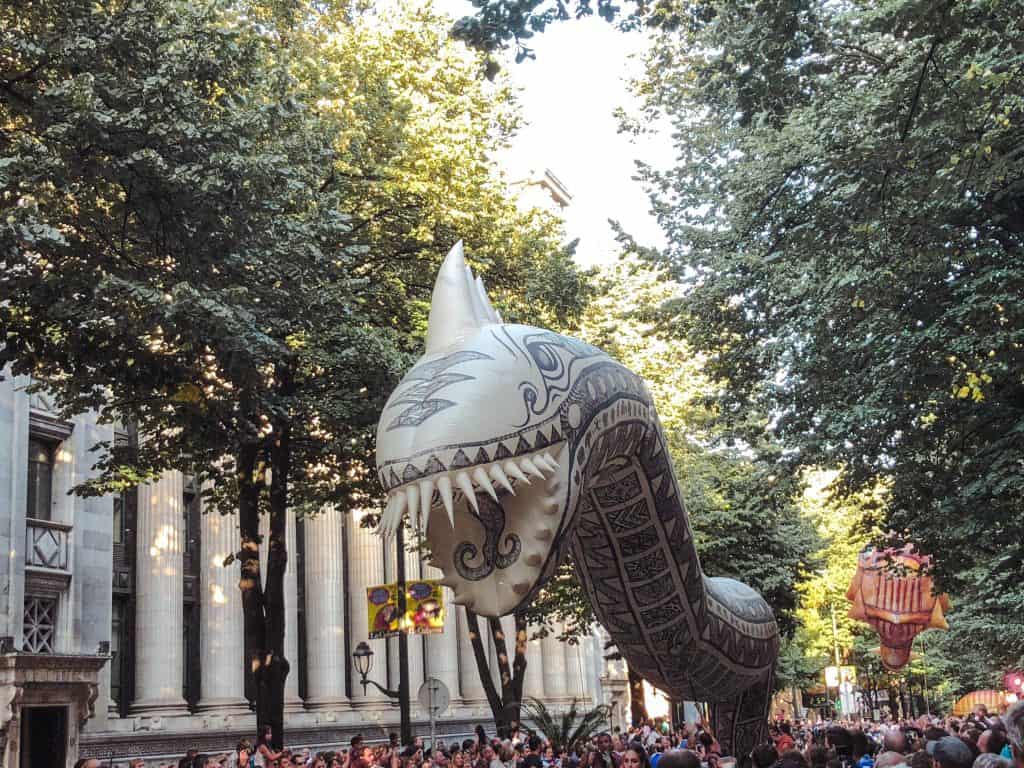 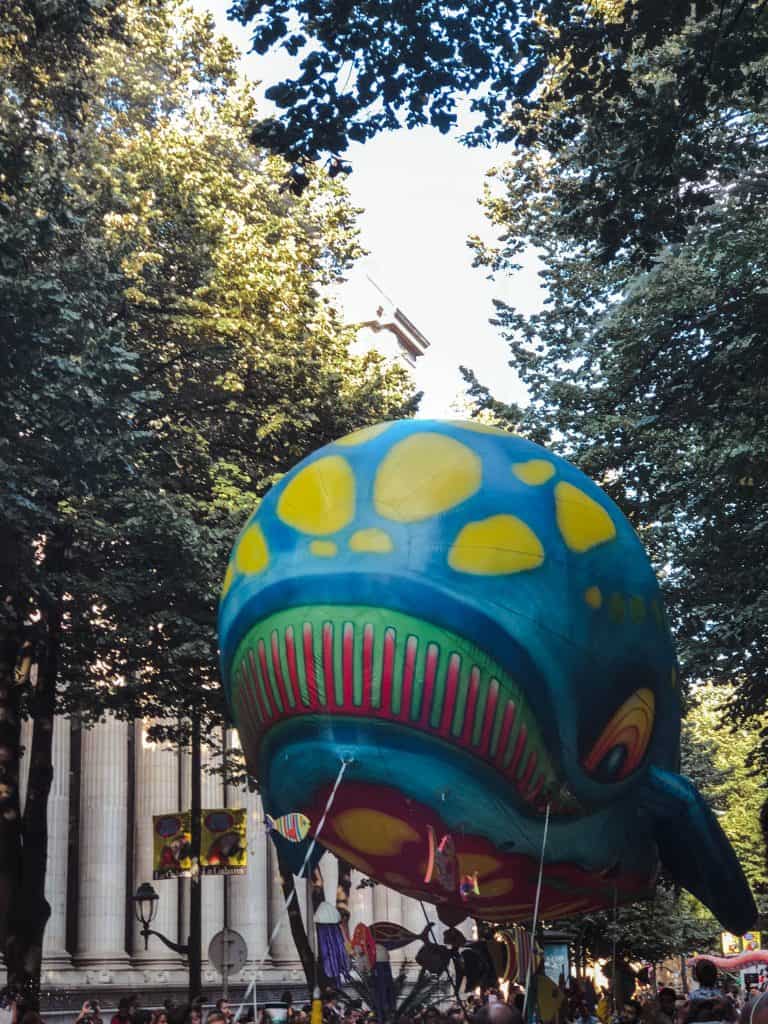 The festival continues during the week with a multitude of concerts featuring traditional Basque music and dancing. Two of the most popular music venues in the city are the quarry amphitheatre and Plaza Nueva. There are gastronomic competitions, a giant egg and flour food fight, and traditional rural sports like wood chopping and stone carrying competitions. Children will have plenty of activities to keep them busy including being swallowed by Gargantúa monsters, who parade through the streets. Yes, you read that right. Not to worry, inside the Gargantúa is a slide so the kids can ride through the body and come out the tail. 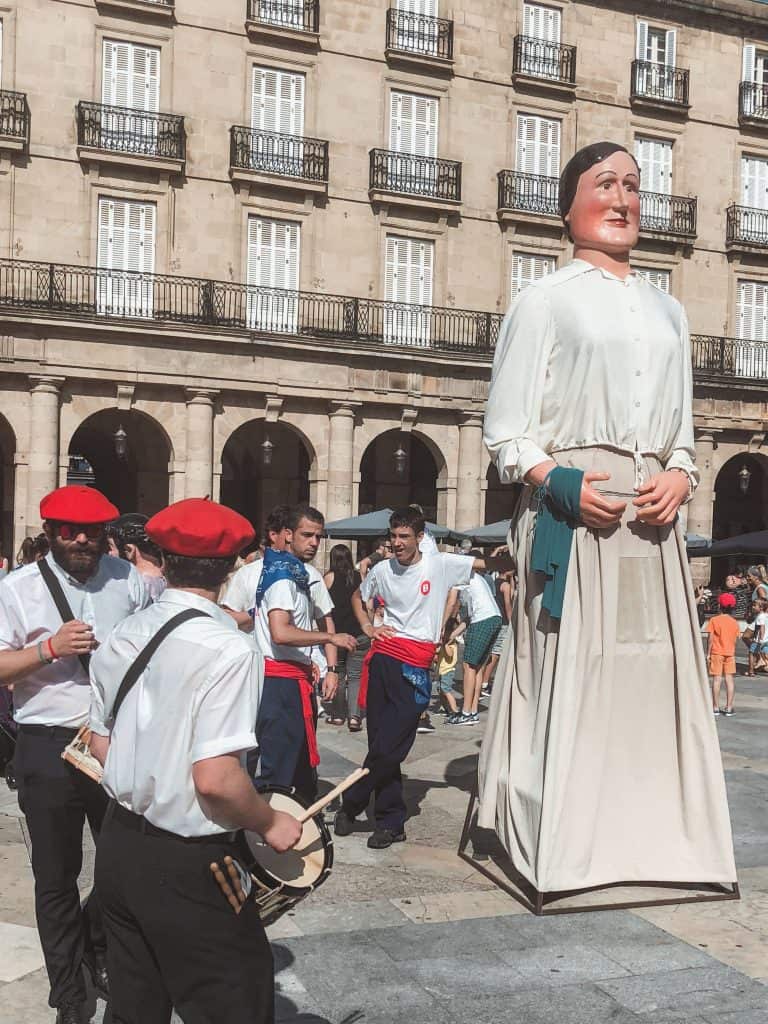 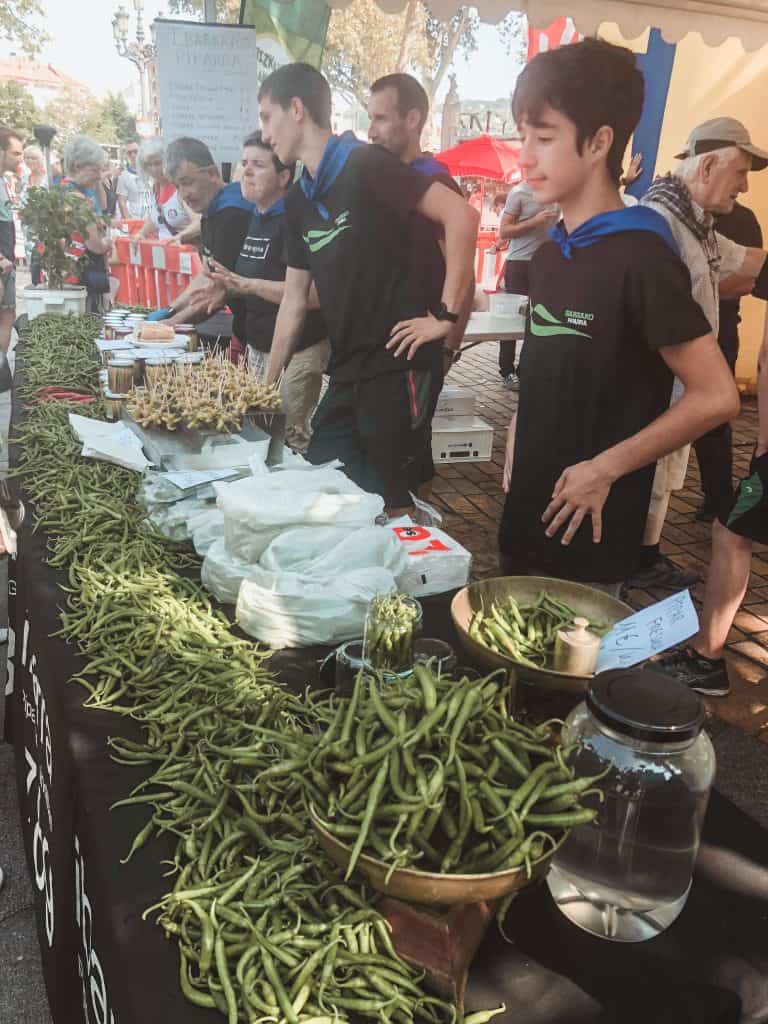 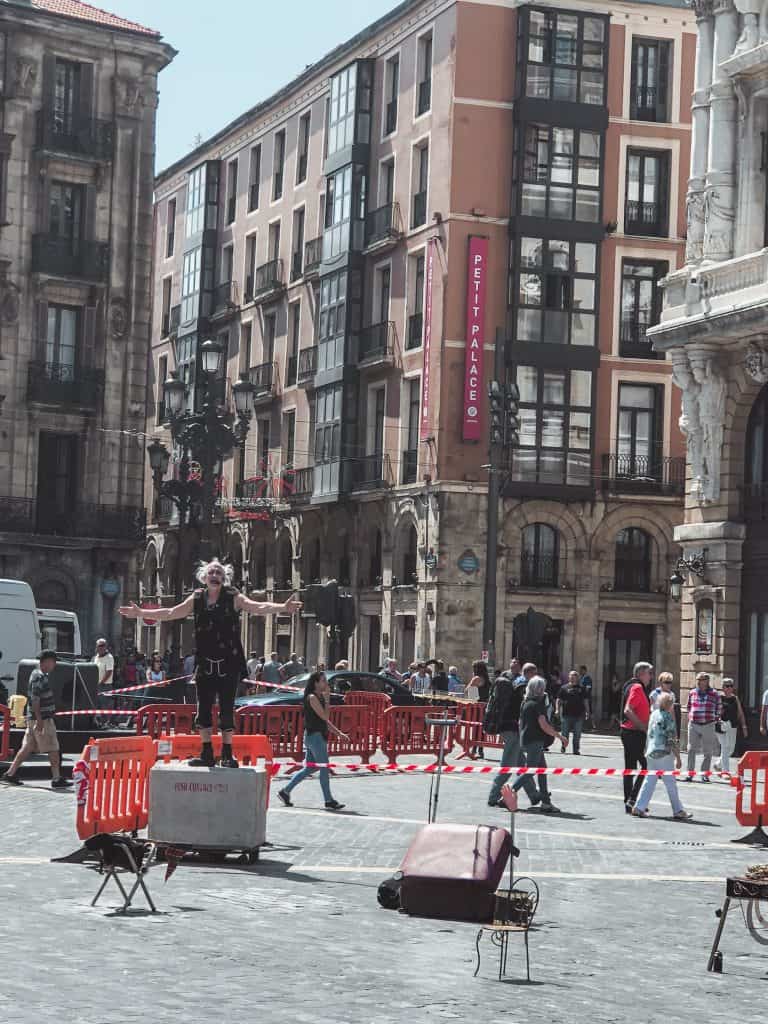 The Basque language is quite a departure from Spanish; consequently, I had a much more challenging time understanding the different customs that took place during the festival. After asking questions and doing a bit of online reading, I feel as though I have enough of an understanding to explain some of the most important facets of the festival. There are 28 groups or konpartsak – local associations that help to organize the Semana Grande festivities — along with the city council. Each of these groups sets up a festival tent called a txosna in the Arenal, the center for Semana Grande celebrations. These tents serve as both the base for each of the 28 konpartsa as well a public bar. Festival goers can buy a reusable cup from any of the txosnas and refill their drinks over the course of nine days with a variety of choices including Kalimocho, a drink consisting of equal parts red wine and coke, and a staple of Basque culture. The cup (vaso in Spanish) only costs 1 euro and can be filled with Fireball shots, beer, cider, etc. While each txosna turns into a massive street party at night, during the day you can see the camaraderie of each konpartsak as they have family meals together and prepare for the evening’s festivities. Many of the locals take time off of work, so expect that some shops and restaurants will be closed during this time. 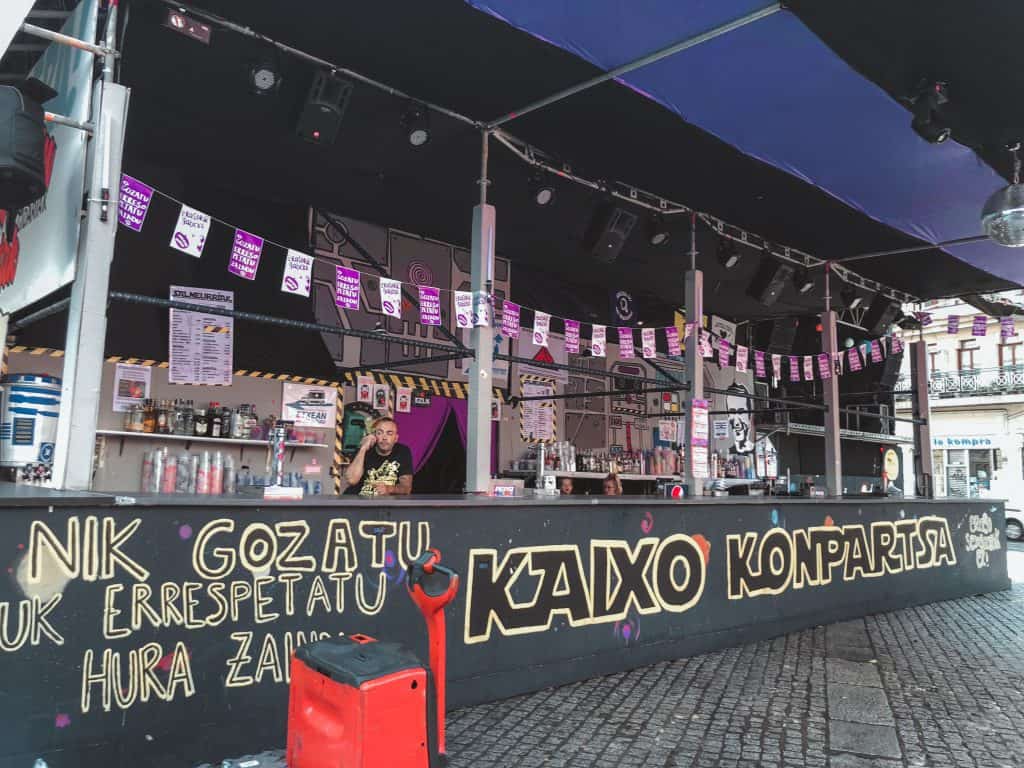 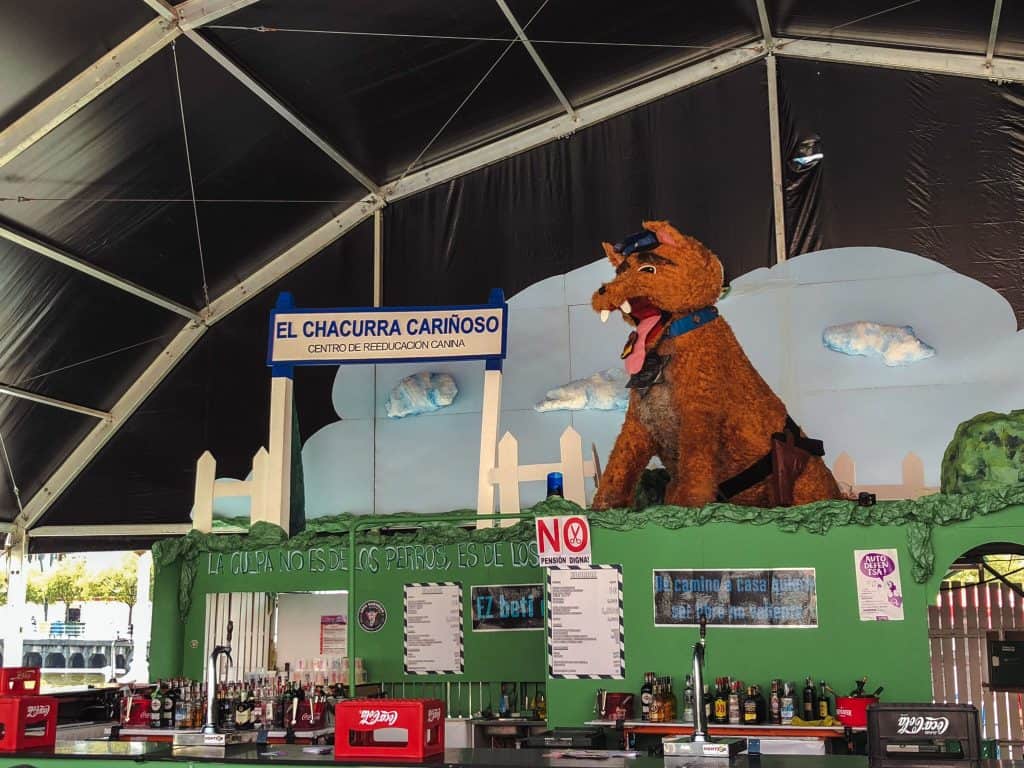 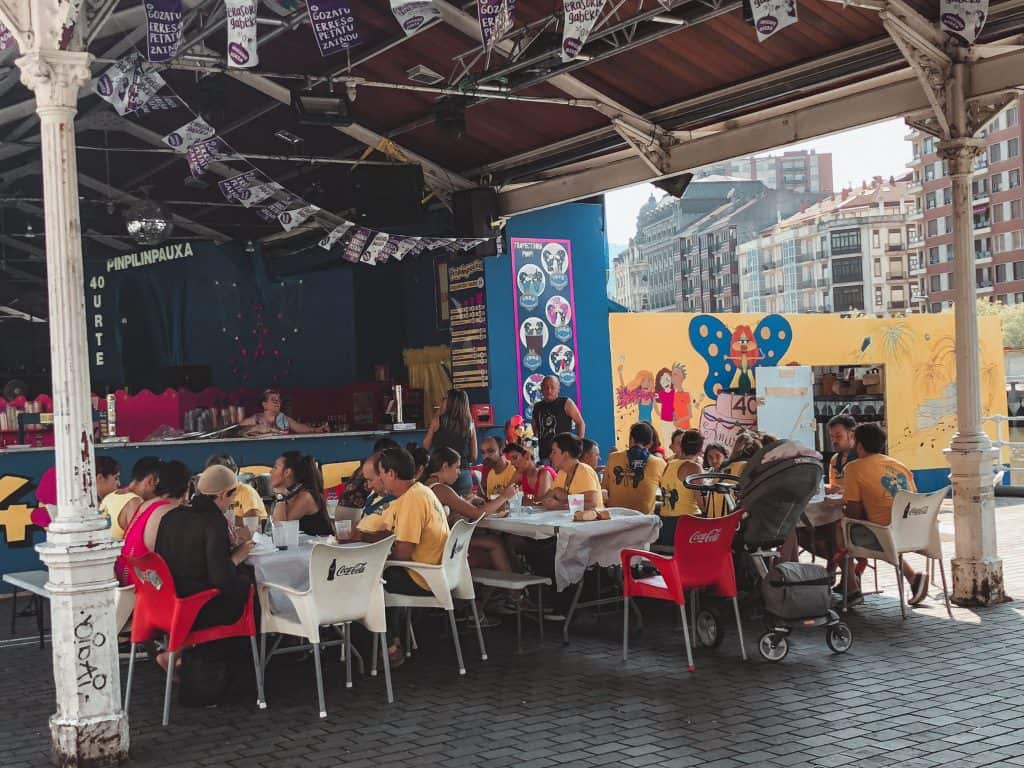 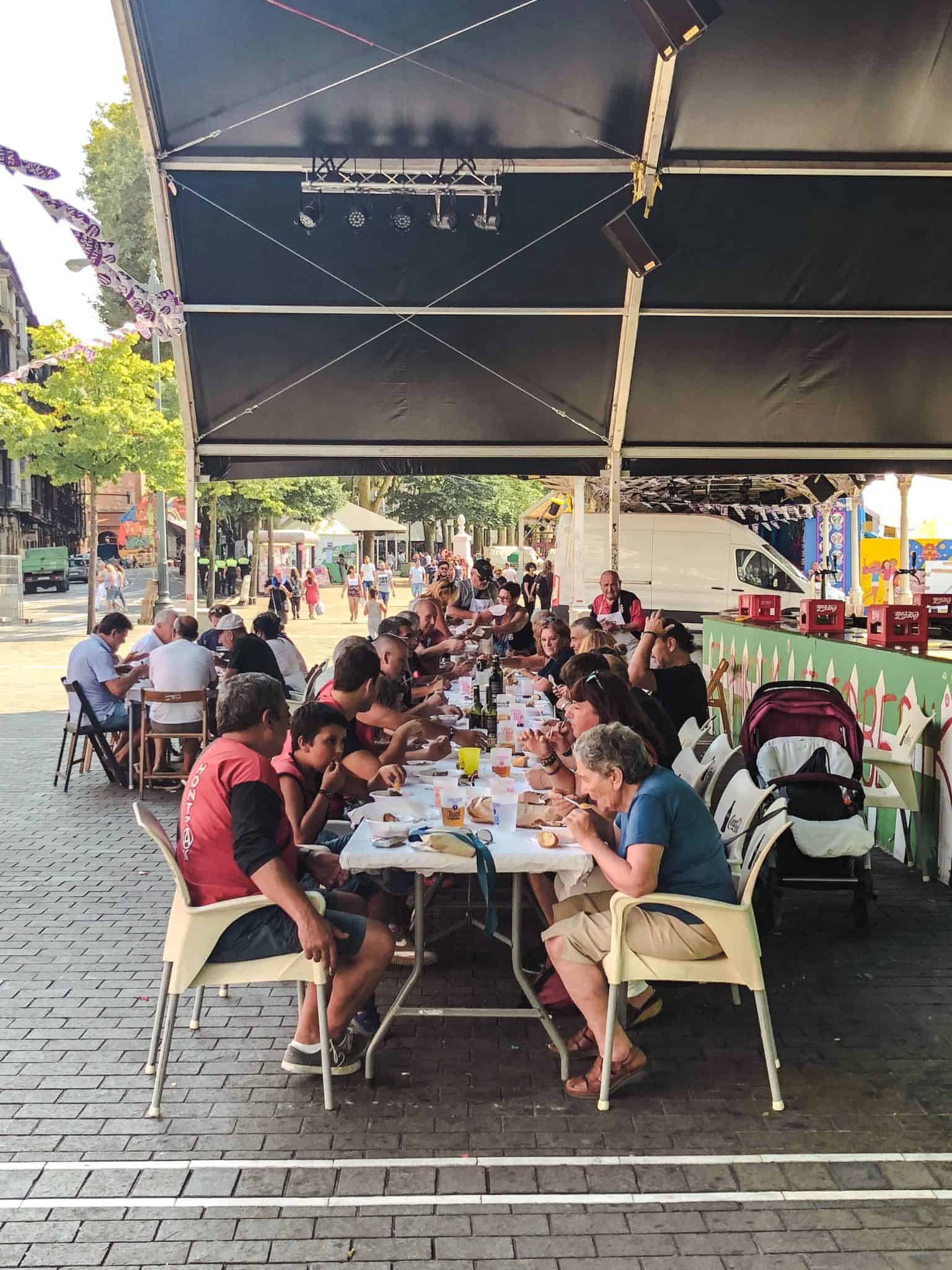 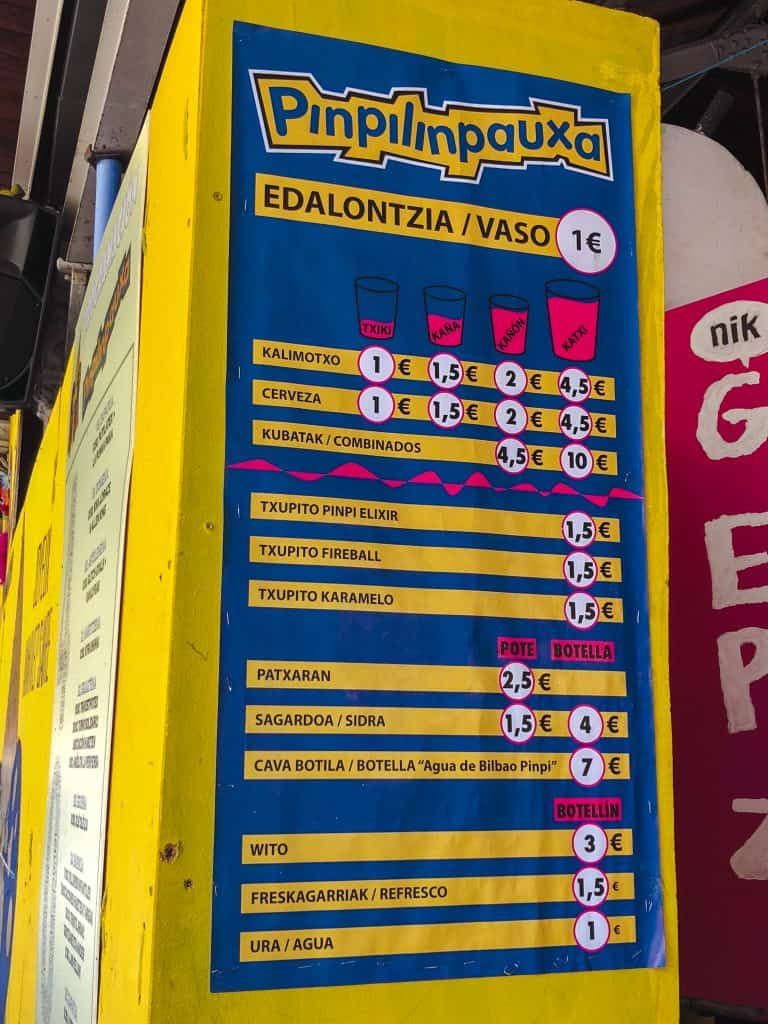 While I came specifically to celebrate Semana Grande, many of the other tourists I met had just stumbled upon the festival and did not plan their stay in Bilbao around the festivities. I’m not quite sure why people tend to stay just one night, for a total of 24 hours in this city, but whether you are coming for Semana Grande or not, I think you need at least two full days in Bilbao. During the festival, I recommend spending a minimum of three full days. You need a day to experience the festivities, a day to visit the Guggenheim museum and take the funicular up Artxanda hill, and a third to day trip to San Juan de Gaztelugatxe, a stunningly beautiful islet on the coast of Biscay otherwise known as Dragonstone for Game of Thrones. I spent four full days in Bilbao because I took an additional day trip to the towns of Portugalete and Getxo. 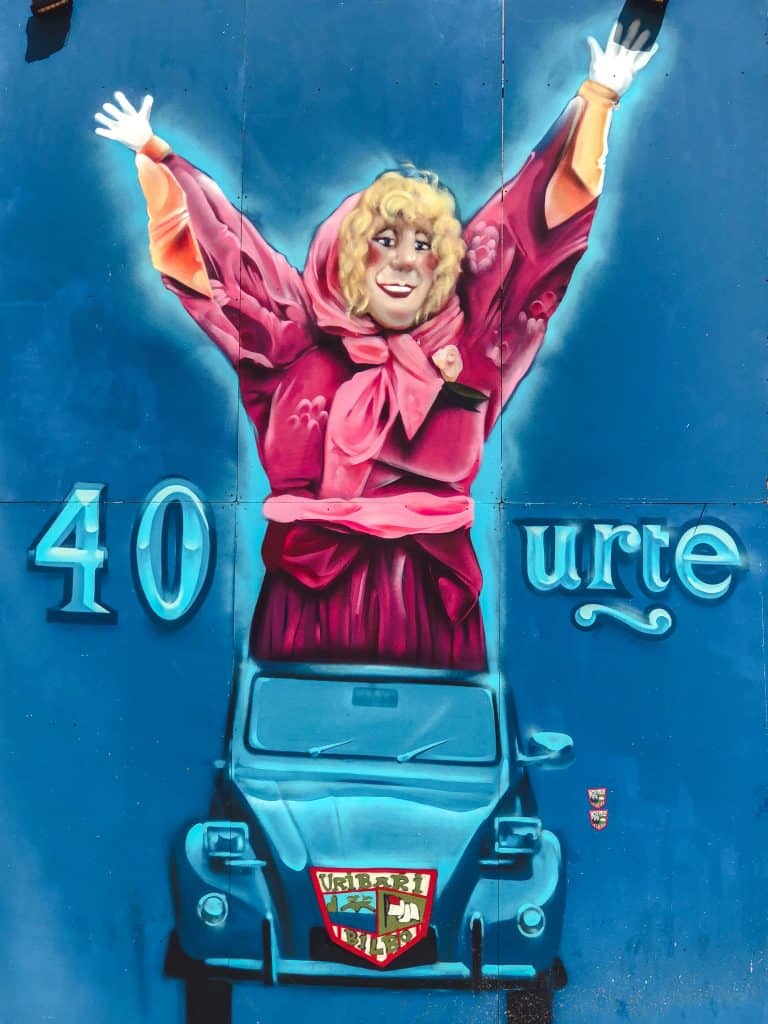 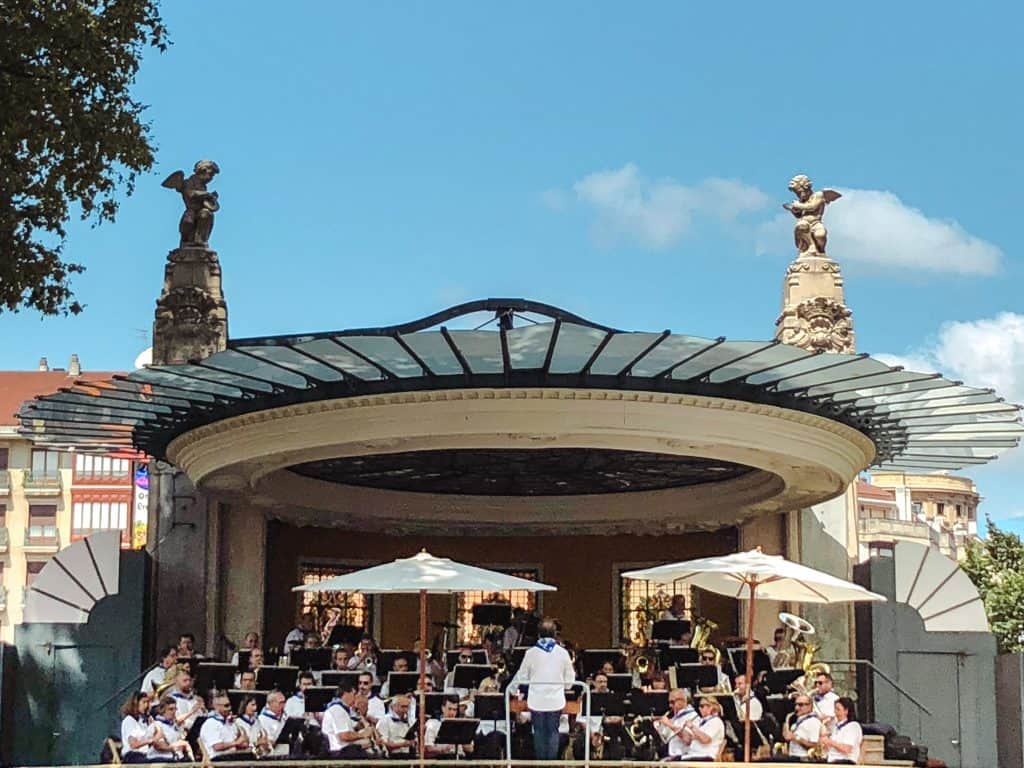 Semana Grande ends on the ninth day when the Marijaia puppet is set ablaze in front of a huge crowd. But don’t fret! She will be recreated next year, ready for another celebration of Basque culture. Raise your hand like Marijaia if you plan on attending Semana Grande in Bilbao in the near future! 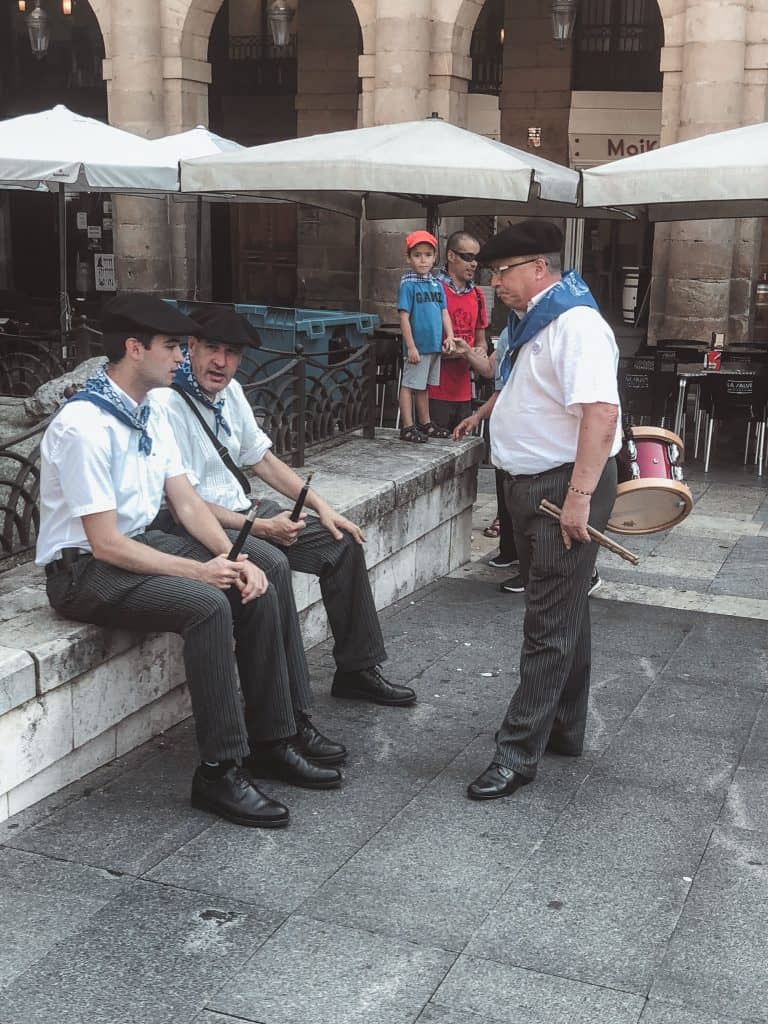 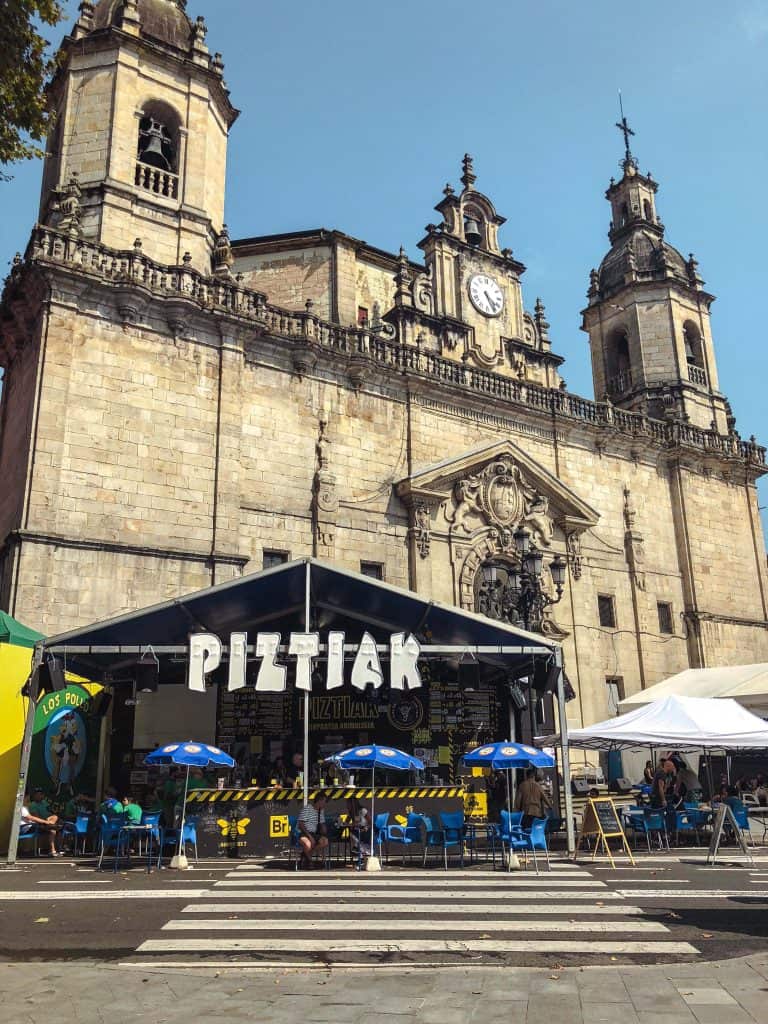 Have you had the opportunity to visit Bilbao during the Semana Grande festival? If so, what was your favorite event that you attended? The more unexpected the better! Please let us know in the comments below 🙂