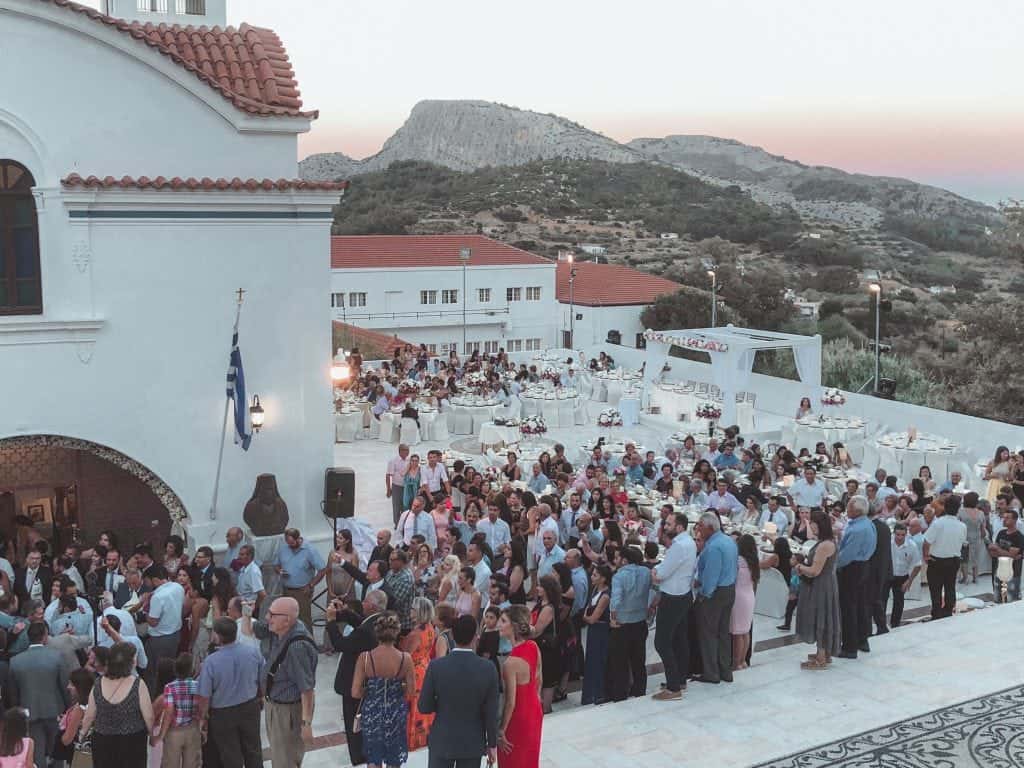 This past July, I had the privilege of being a plus one to a traditional Greek wedding on the island of Karpathos, Greece.  My best friend, Caroline, went to graduate school in New York City with the bride, a Greek American, who spent every summer with her Greek family on the island, Karpathos.  This was where she met the groom, a local Karpathian who lived in one of the neighboring villages.  The happy couple now live permanently in Astoria, a predominantly Greek suburb of New York, but still come back every summer to spend these months on the island.

While I expected a big to-do, I don’t think I was quite prepared for the 1000 person, 15-hour extravaganza that would take place. 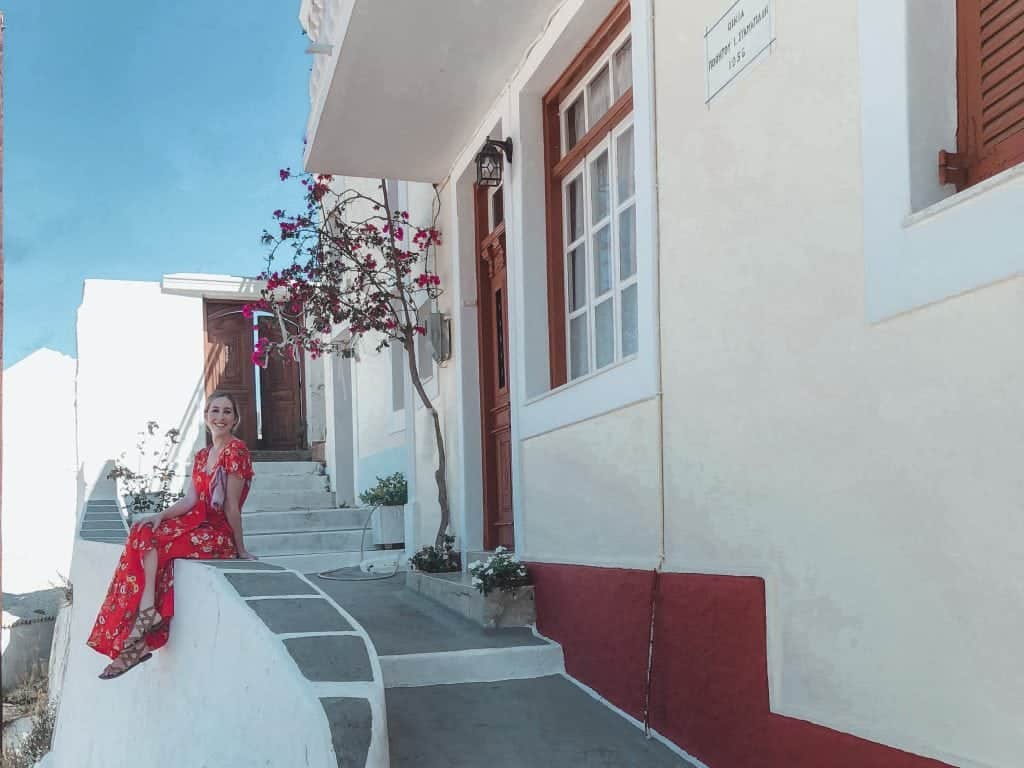 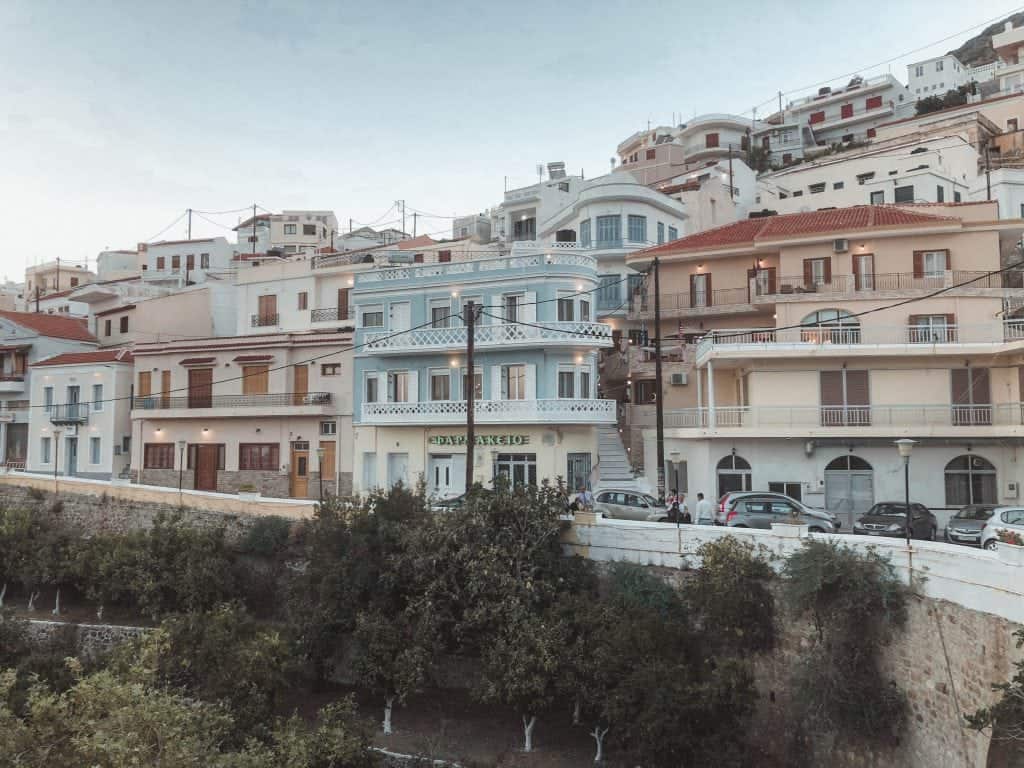 Having never heard of Karpathos prior to this wedding, I was a little nervous getting off the airplane because I assumed that no one would speak English; without WiFi, I would have no way to contact my Airbnb host to let her know I was on my way.  Ha! What wasted angst. Everyone speaks English because many Islanders are Greek American. As soon as I got off the flight, seven men named George asked if I was here for the wedding and George #4 took me to my Airbnb where the host, to my surprise, was the cousin of the groom. The bride had been over a few hours prior with a gift basket full of Greek goodies. I quickly learned that my shock over the fact that the groom’s cousin was my Airbnb host was ridiculous. Everyone on the island seemed to be cousins with either the bride or groom’s family, or at the very least was the schoolteacher, best friend, or had just re-did the air conditioning in one of their houses. We actually met the island electrician on our way to check out the local cemetery and he insisted on giving us a tour. He explained what the tombstones said and told us the background of many of the people buried there which was quite fascinating. 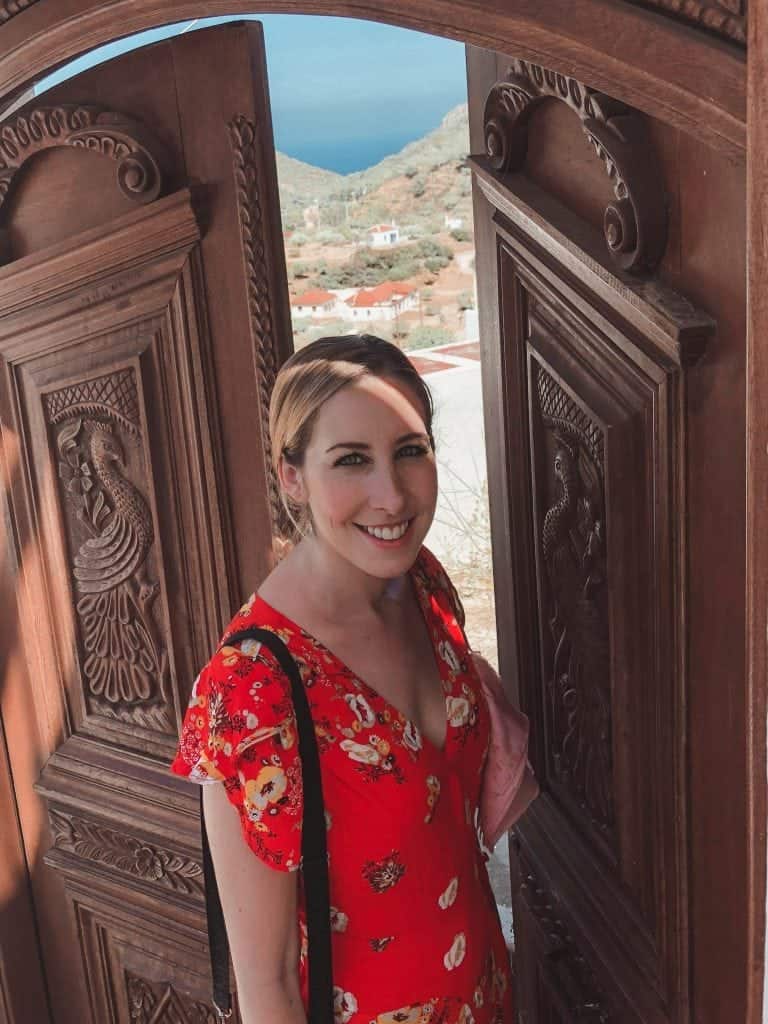 Because Caroline had flown all this way, we were able to come to the bride’s house at 3 PM. This is when the families gather at the respective houses of the bride and groom to sing songs, play music, talk, eat and drink while the family members get ready.  Upon arrival, you receive a handkerchief to wear on your clothes.  This cloth indicates that you are a VIP, a member invited to the family’s house and not just a guest attending the wedding. We walked around the bride’s village, Aperi, for a bit and sat and talked for hours with some of the villagers, having some of the best conversations of my life. We spoke to a man named Mike, who was a boy during World War II and he told us all about his time during the Fascist takeover in Greece. His family refused to send him to the Fascist Italian school, so they fled to the mountains and lived there for three years until the end of the war. The Allies ended up bombing the main port town of Karpathos, Pigadia, because even though Greece was on the Allies side, Italy had taken control of the islands. 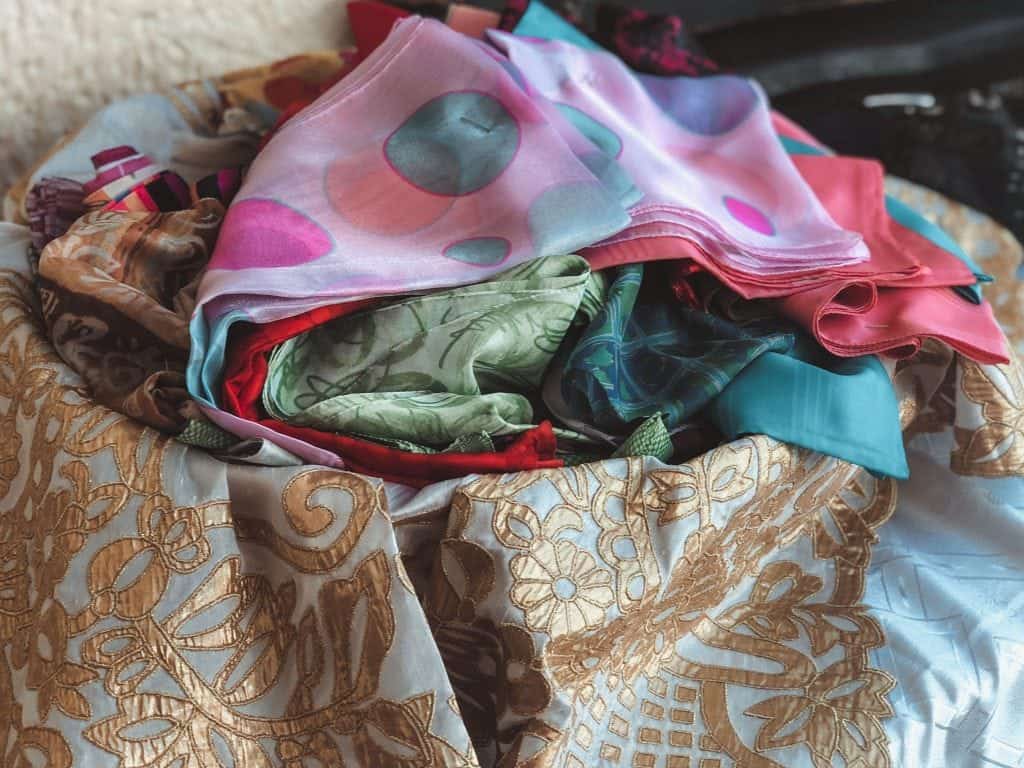 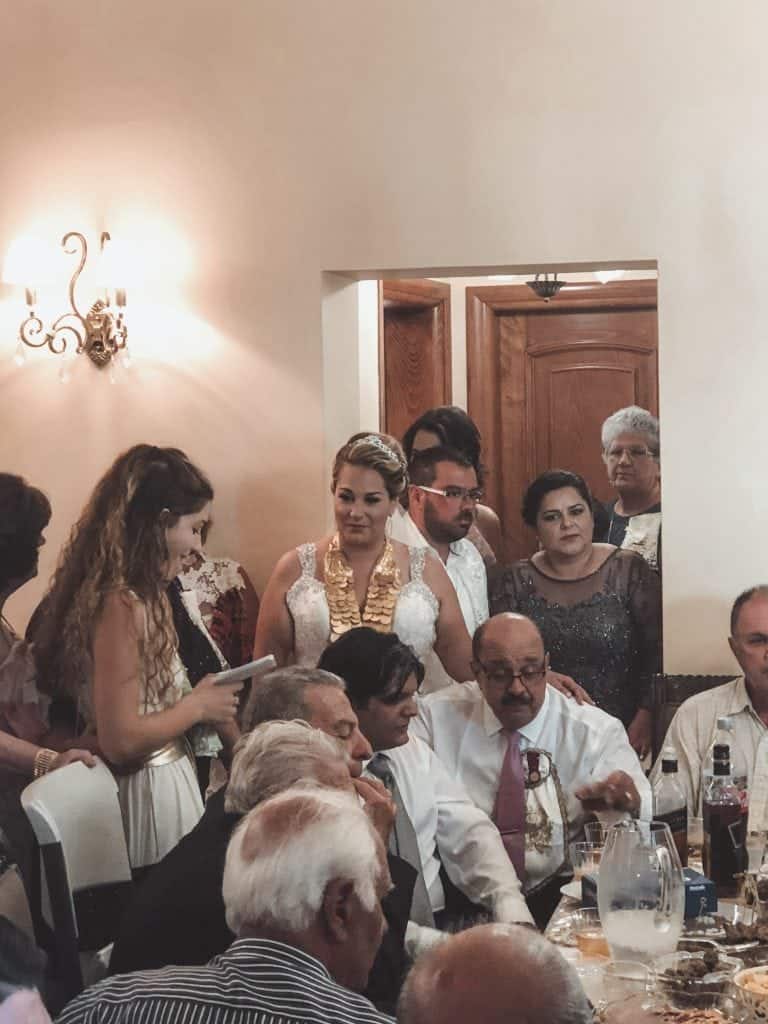 The coins that the bride wears around her neck are her family’s heirlooms or the “dowry.”  Caroline went up at the end of the service to wish the couple well, and wedding guests were actually pinning more pieces to the necklace.  The woman in front of her in line pinned a pearl necklace to the bride. At around 7 PM (but really 8 because…Greek time), it is tradition for the groom and his family to come to the bride’s village and woo the bride out of her house by singing songs and playing instruments on the way to the ceremony. Every one of the handkerchief VIPs paraded across town to the Orthodox church where the rest of the island’s guests were waiting.  The ceremony is done entirely in Greek; at the conclusion, you are given a bag of rice to throw at the couple for prosperity. Sadly, Karpathian tradition does not include shouting “Opa” or plate breaking.  But, it is a matriarchal society, so the oldest daughter traditionally inherits the family’s house, not the son. Pretty awesome if you ask me. 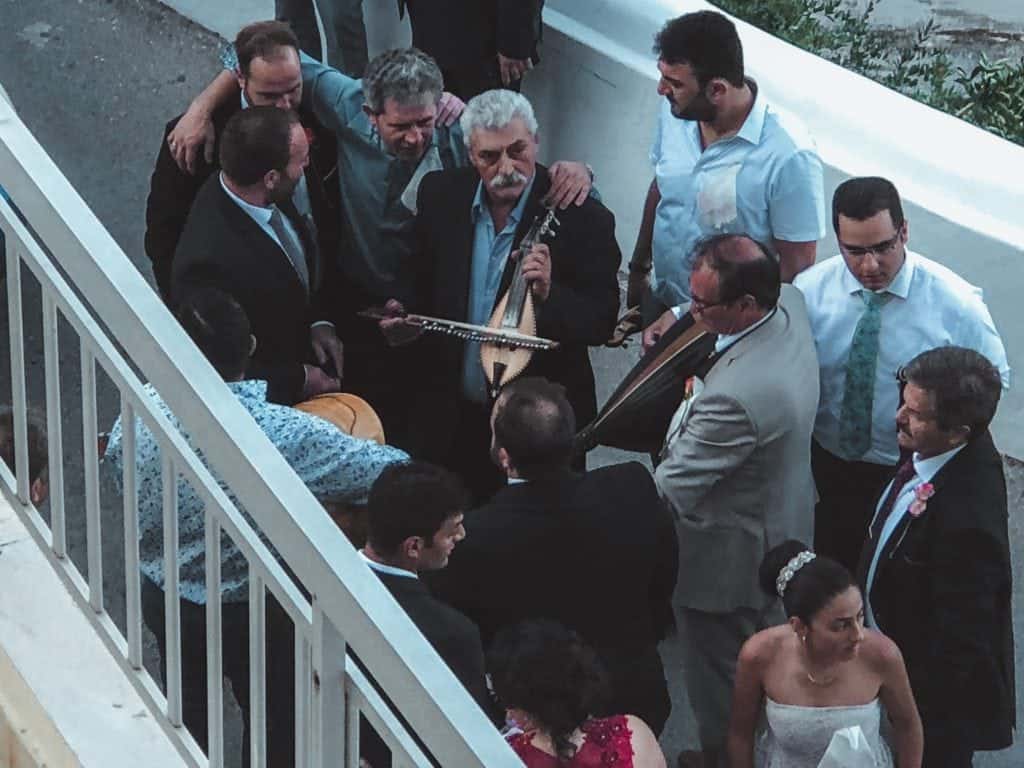 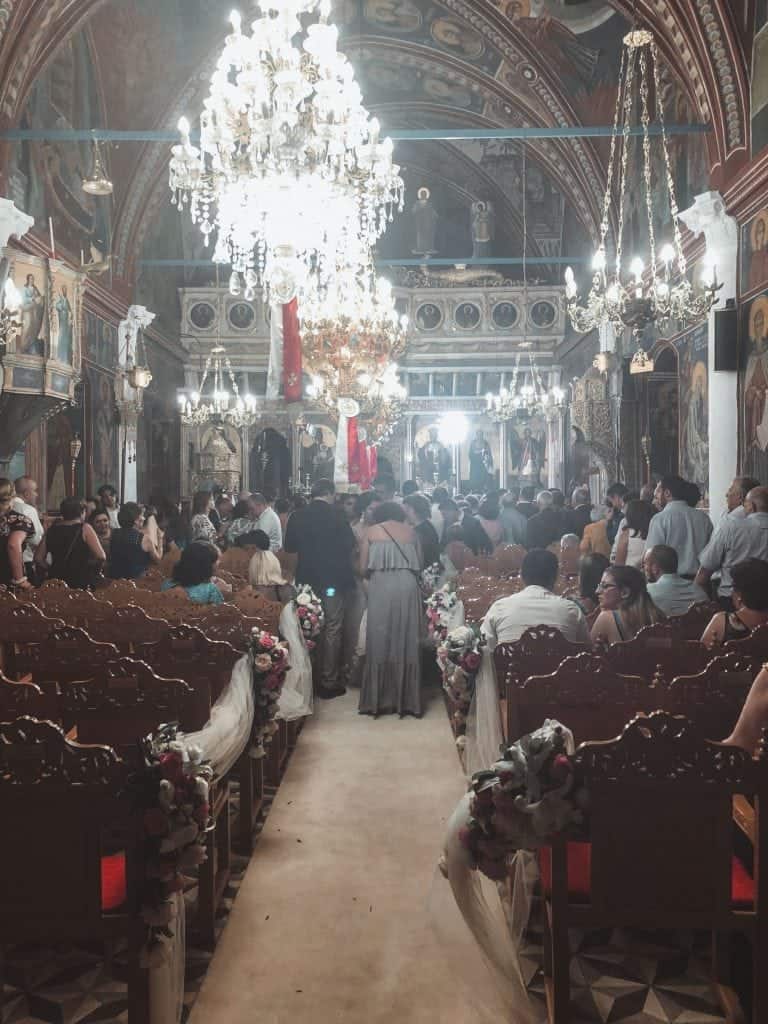 The wedding reception after took my high expectations and exceeded them beyond all sense of imagination. At this particular venue, which was located right outside the church, there were two levels of seating.  A downstairs room for anyone on the island of Karpathos who was attending the wedding, and the upstairs patio which had a series of long tables and round tables of 10. The bride and groom go off on a couples photo shoot before making their grand entrance. And when I say grand…I mean music, a video montage of clips FROM THE HOUSE AND CEREMONY that had just occurred 30 minutes before (how did they do that in 30 minutes?!?!), the couple’s first dance, and then some casual fireworks. No. This wasn’t a national holiday that I wasn’t aware of.  These were fireworks specifically for the wedding. There were some appetizers to start, wine was flowing, and then a traditional Greek wedding meal which I found out the following day was goat with a side of rice and potatoes. Cool. Glad I didn’t know what traditional Greek cuisine was for weddings while I was eating it.  All 1,000 wedding guests are fed though which I thought was really wonderful; It didn’t matter if you were seated upstairs or down. 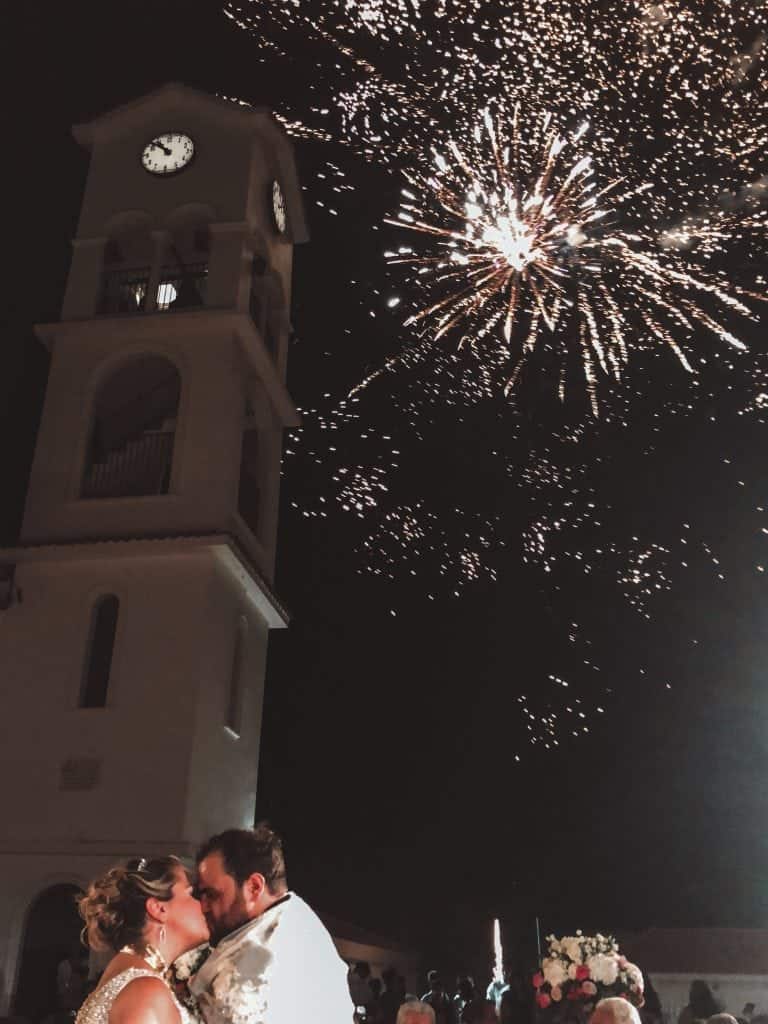 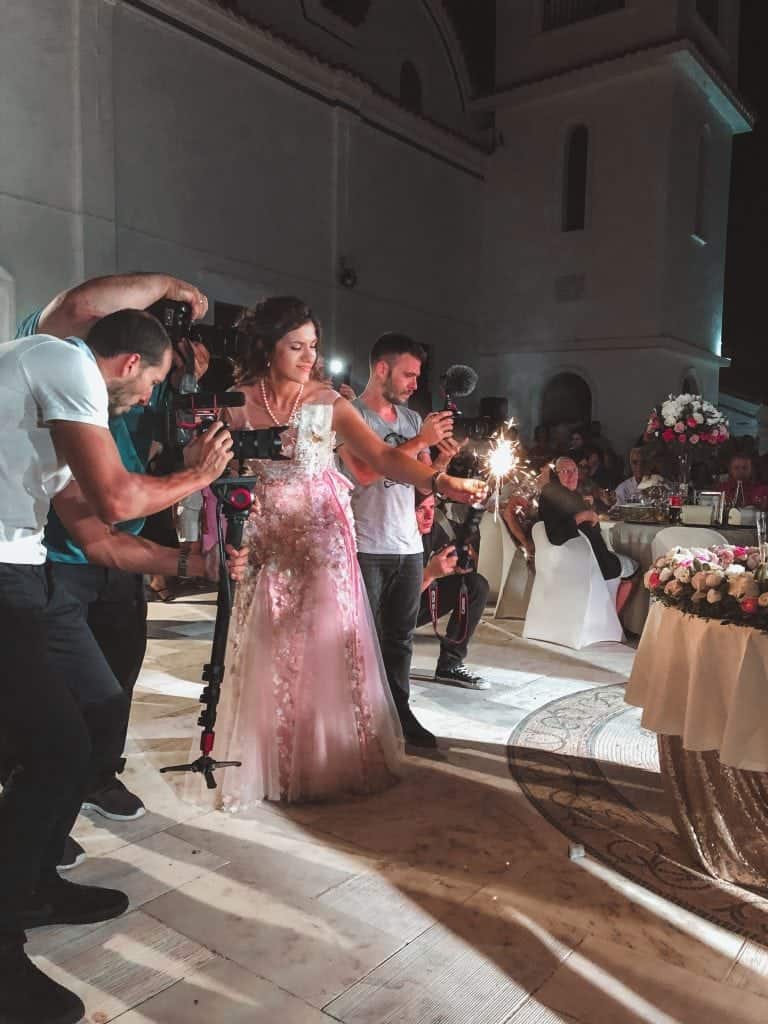 If I am being perfectly frank, I just don’t quite understand Greek dancing.  It goes on for hours and is quite repetitive.  I may be completely ignorant on the matter, but essentially it seems to be two steps to the right, 1 step to the left, with very little variation. You can’t knock it before you try it though, so I did get up to see what I was missing out on and the experience fell a little flat.   I’ll tell you what absolutely hit the mark though. Dessert. As a parting gift, everyone is handed a large gift bag and all of a sudden sweets just start coming left, right, up, down, and from across the room. I didn’t realize this prior, but wedding guests are supposed to bring a large platter of desserts as a wedding gift.  All of these desserts, both store bought and homemade, are then passed out to the guests.  By the end of the evening, our gift bags were probably filled with 30-40 treats. And don’t even think about declining because I tried and that was massively insulting. 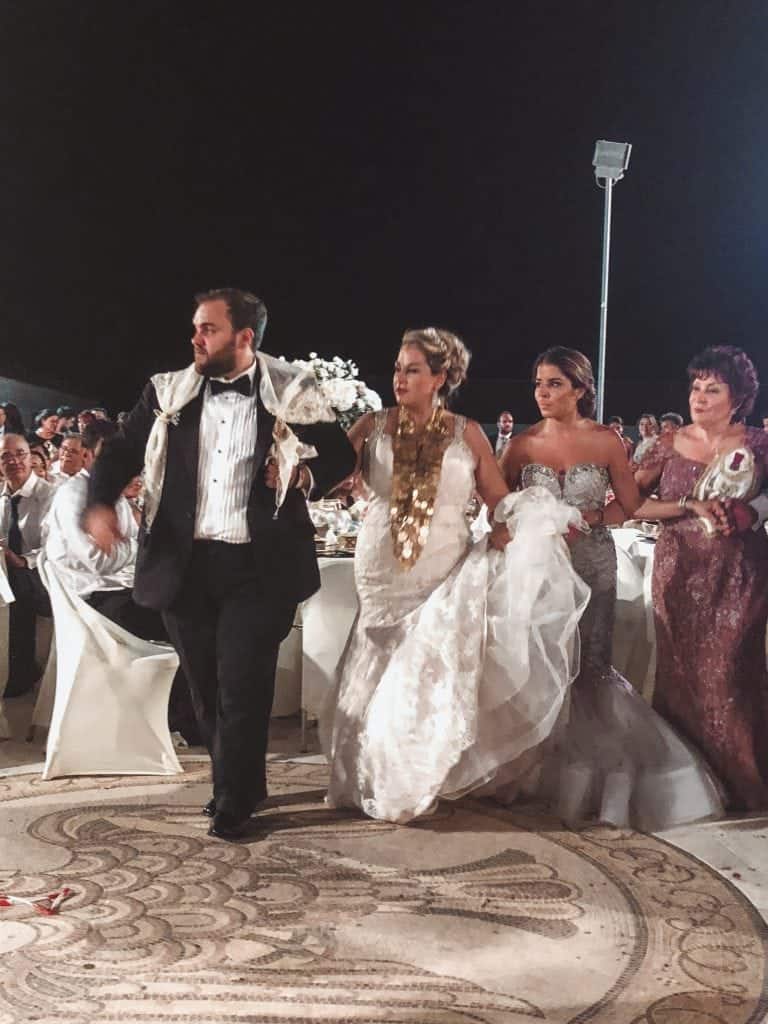 At about 2 AM, having been there for 11 hours or so and still flighting jet lag, we decided it was time to head back to our Airbnb.  We went up to the bride to say our thank yous and goodbye and she was not having it. Why? Because the traditional Greek dancing stops at 2:30 AM and the DJ starts.  I think we lasted two or three songs, but it was so fun to let loose and dance along to some Greek pop-style hits.  We took the taxi back from the hill town village down to the port of Pigadia where we were staying, and needless to say, spent the entirety of the next day laying on a beach and not moving after the previous night’s event. 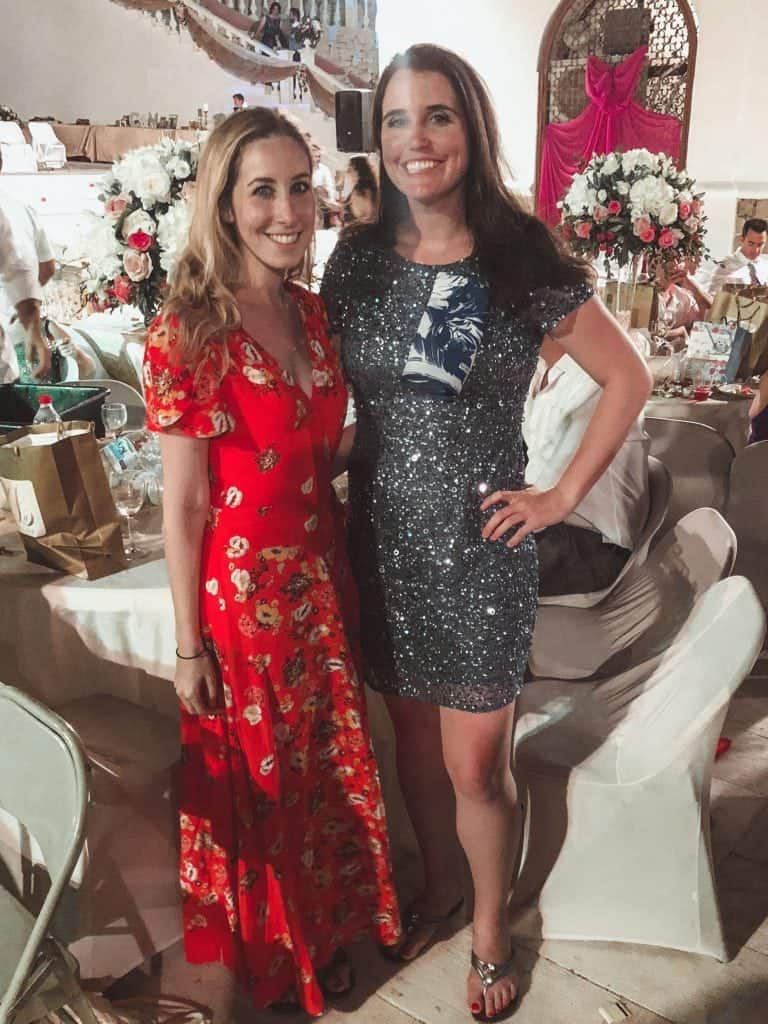 Attending a Greek wedding in Greece was truly a once-in-a-lifetime experience and I am so grateful to both the bride and groom for being so generous with an invitation and making me feel so included in their special day!  And, of course, thank you to Caroline for being such a good friend and for inviting me along on this wonderful adventure 🙂 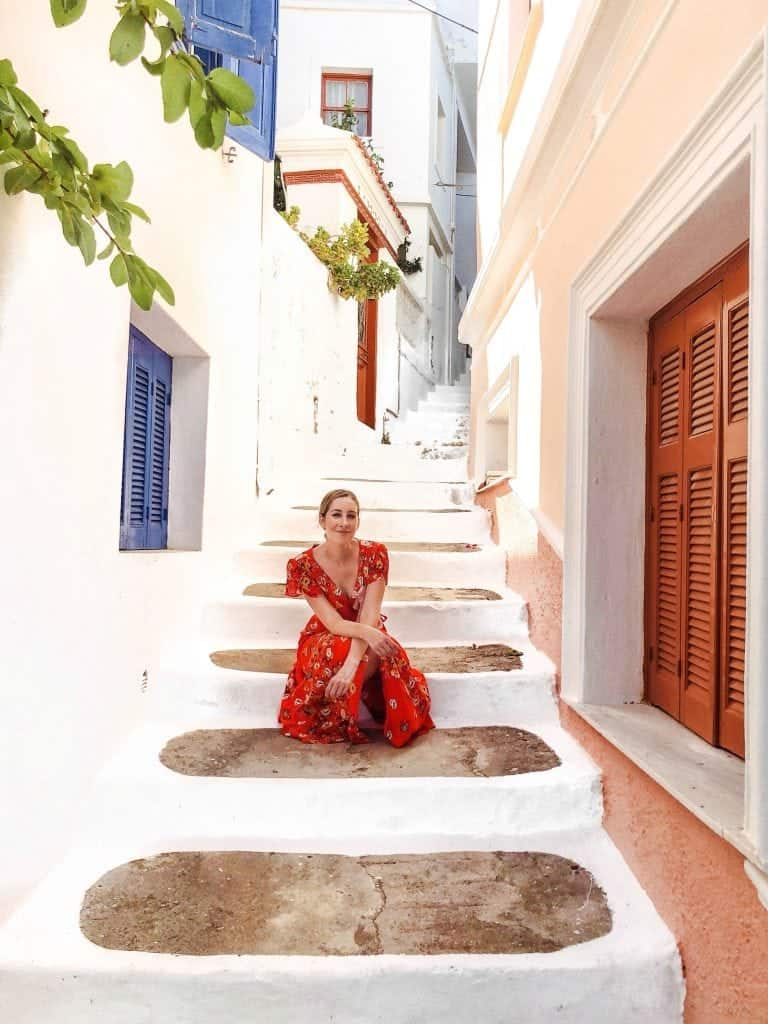 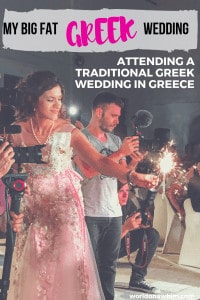