Best Things to Do in Rancho Palos Verdes: The Ultimate Day Trip 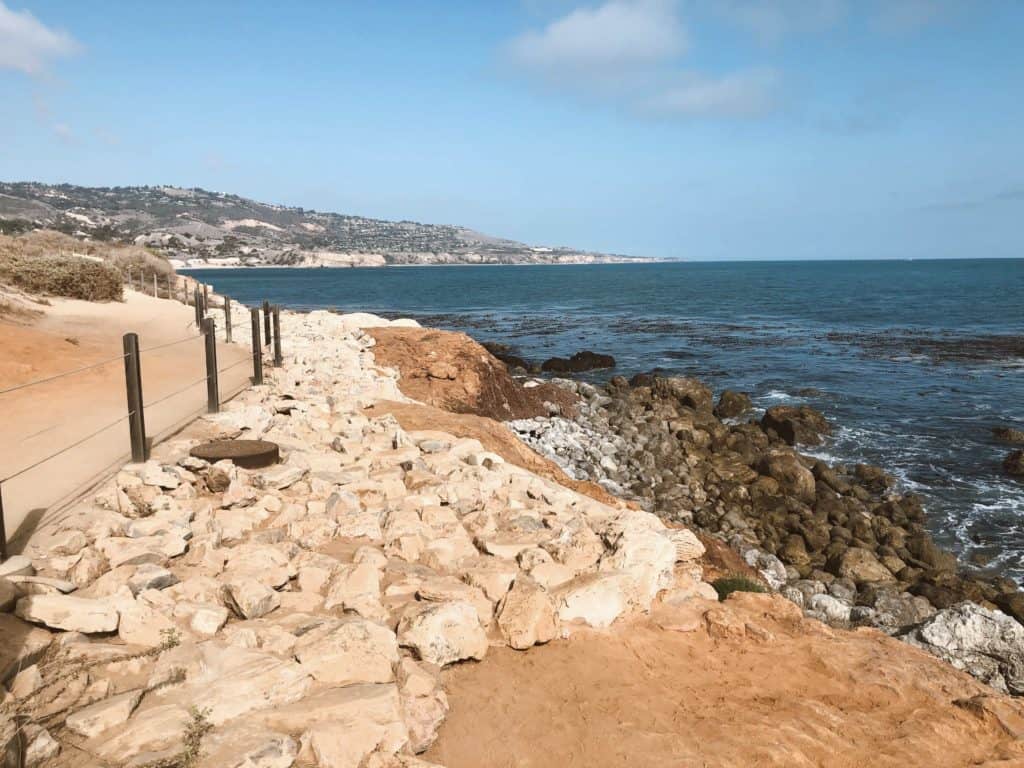 In a year without travel, I decided to embark on a mini adventure each day and explore different pockets of Los Angeles and its surrounding areas. Having been born and raised in Los Angeles, I absolutely knew of Rancho Palos Verdes, but never visited. I’d always known that Rancho Palos Verdes was there, but if you weren’t staying at Terranea, was the city worth a visit? It was time for me to find out.

The coastal city is just 30 miles or so from LA near popular destinations like Long Beach and Anaheim, but no freeway runs through it so it’s “out of the way.” Even PCH, the classic highway that runs along the coast of California, runs inland of the area. In other words, you wouldn’t have a reason to drive through unless you planned to make Palos Verdes your intended destination.

And you should make a day of it because Rancho Palos Verdes truly is incredible. The city boasts the most alluring coastline. And while the neighborhood is quite affluent, the area still feels approachable and inviting – not sceney. The service my friend Abby and I received, especially at Terranea when I showed up to the valet in my dirty 2012 Mazda, reflected this.

What to Do in Palos Verdes

Voted the #1 thing to do in Rancho Palos Verdes on TripAdvisor, we thought it would be worth it to stop and check out this beautiful glass church. And I would say it definitely was. The chapel features geometric designs and glass windows which allow for you to peer out to beautiful redwood trees surrounding the space. As you can imagine, it’s a popular wedding venue as well. A visit only takes 5 to 10 minutes and there is a large, free parking lot onsite.

The chapel was designed by Lloyd Wright, the son of Frank Lloyd Wright in the 1940s. Construction on the chapel began in 1949 to memorialize the 18th century scientist and theologian, Emanuel Swedenborg.

I do love Starbucks, but we thought it would be better to get a coffee from a local shop. We were going to drive up to Reverent which has some stellar Yelp reviews, but the yawns were nonstop and we grew impatient.

We happened to be driving by Yellow Vase cafe on our way to check out the Rolling Hills Estates neighborhood, so we made a snap decision – a quick lane change and we were in the parking lot. We were so glad that we did. The iced Spanish lattes were ridiculously delicious. If you love sweet coffee, I strongly urge you to stop here at some point on your day trip.

With coffees secured, we drove around Rolling Hills Estates to get a feel for the neighborhood and see really large homes. We didn’t really have a game plan and there are a lot of gated communities in the area so we didn’t see much. Nevertheless, it was a nice way to break up the day and the views from the car as we drove to the top of the hill were quite nice.

We spent the majority of the day at Terranea and it truly could not have been more perfect. By the time we arrived around 2:30PM, the marine layer had burned off and the sun was finally shining. It truly felt as though we were on vacation.

Valet parking for the day at Terranea is $15. While I detest paying for parking, I actually thought that the price was reasonable because we were able to thoroughly explore the grounds and utilize Terranea’s shuttle service which will take you around the property. We opted to walk to Nelson’s for lunch.

If you are looking to stay overnight at Terranea, check rates on Booking.com | Hotels.com | TripAdvisor

I had tried to make a reservation online for Nelsons, the more casual dining oceanfront restaurant at Terranea, but to no avail. It wasn’t that the reservations were booked up, but there weren’t any times available at all. This was a bit strange because I had been able to book reservations online when I was perusing the website a few months ago.

Anyway, we called the restaurant and they said that they could only make reservations for hotel guests. They said that since it was a Friday, it might be busy but we had planned to go mid-day anyway for a dunch/linner situation so we figured we wouldn’t have a problem.

Reading the reviews online, Nelsons seems to be quite polarizing so while I hoped for the best, I knew to keep my expectations in check. Well, ours was a 5 star experience.

We walked up and were seated immediately. We decided to press our luck and ask if we could eat at one of the picnic tables right out by the water and they said yes, we could! The lesson here is to speak up and ask if there is a picnic table available. We both ordered hamburgers and they were delicious. The brioche bun was soft and fresh and the cheddar was sharp and delicious. The burger itself was perfectly cooked and well-sized.

I know that Nelsons can be pricey, but I was happy to pay $18 plus tax and tip for a delicious burger with views of the bluff.

The plan after Nelsons was to walk the Terranea Discovery Trail. There are all sorts of hiking trails in Rancho Palos Verdes and AllTrails really has a great breakdown of your options. Most of the trails seemed to fall in the 1-2 mile range or 5-6 miles and we were interested in the former.

The trail was on the other side of the Terranea property so we could have had the shuttle take us from the restaurant, but we decided to walk instead. We never quite made it to the trail, but we didn’t have to. The path through Long Point to Terranea Beach was simply perfect. The sea caves are also right there should you choose to walk along the rocks a bit further to check out this epic spot.

If you are going to do any hiking in Palos Verdes, make sure to wear closed-toed shoes. The trails are generally very well-maintained but they can be quite dusty!

Here are some popular hiking trails in Rancho Palos Verdes should you wish to add a morning hike or sunset hike to your day.

The trail takes you down to the beach and to the tide pools. Parking is free for the first 30 minutes or $6 for 2 hours.

This easy walking trail takes you along the bluffs and through the resort. Parking is free; look for “Trail Parking” on Google Maps.

You can choose to take a very easy walk 1.6 mile along the cliffside overlooking the ocean or you can continue onward for 5.6 miles or so through Terranea resort. This trail has a well-defined path and picnic benches along the way as it is more of a stroll than a hike. There is a free parking lot right onsite.

A Greek freighter named the SS Dominator ran ashore on the Palos Verdes Peninsula in 1961 and the ship was ultimately abandoned. The ship’s remains have been can still be seen scattered along the shoreline which is why the Shipwreck Trail is such a popular Palos Verdes hike. Make sure to wear supportive shoes on the trail as it is incredible rocky!

The trail is more inland and not along the coast, but still boasts incredible ocean views. You can stick with the main trail or diverge to the other off-shoot trails that interconnect and loop back. Note that the uphill incline is at the end of the trail. Parking is limited.

The beaches are rugged and rocky for the most part, and not exactly swimmable; but, if you wanted to picnic or perch yourself on a rock to watch the waves crash, these are six of the best beaches in Palos Verdes.

Spend golden hour or watch the sunset from the nearby walking path at Point Vicente Lighthouse. It’s just a half mile away from Terranea.

The lighthouse was built in 1926 after years of complaints from sailors who deplored this dangerous stretch of coastal waters. The lens for the lighthouse had been manufactured in France by one of the oldest lens making companies in the world; it had been used at a lighthouse in Alaska for the past four decades before it was brought over to Point Vicente. The light that emanated from the lens was so good that it used to be one of the brightest landmarks on the West Coast. During World War II, however, the lens was changed from 1000 watts to 25 watts so as not to aid enemy navigators. Today, the lighthouse still functions with an automated light.

If you’d like to learn more about the history of Point Vicente, there is an interpretive center nearby which houses the original lens from France!

There’s no booming hotel scene nor is Palos Verdes a premier nightlife destination, but there are a couple of cute restaurants to dine at should you wish to stay past sunset to avoid traffic. On the top of that list is Giorgio’s Italian restaurant, which is family-owned and boasts an extensive menu of traditional Italian dishes. There are Thai options, Swan Thai, and Mexican cuisine, Salsa Verdes, too.

Or, you can head back toward San Pedro and dine at Raffaello Ristorante. I actually ate at this popular, family-run Italian restaurant a few years ago before a visit to Fort MacArthur and I highly recommend it!

A day trip to Rancho Palos Verdes is the ideal way to escape for a staycation, but without having to pay for a fancy hotel room. And if you get too swept away by its views, a room at Terranea is always available to you.

Have you spent time in Rancho Palos Verdes before? Let us know in the comments below! And don’t forget to check out these other posts on WOAW!

Los Angeles Packing List: What to Wear in LA