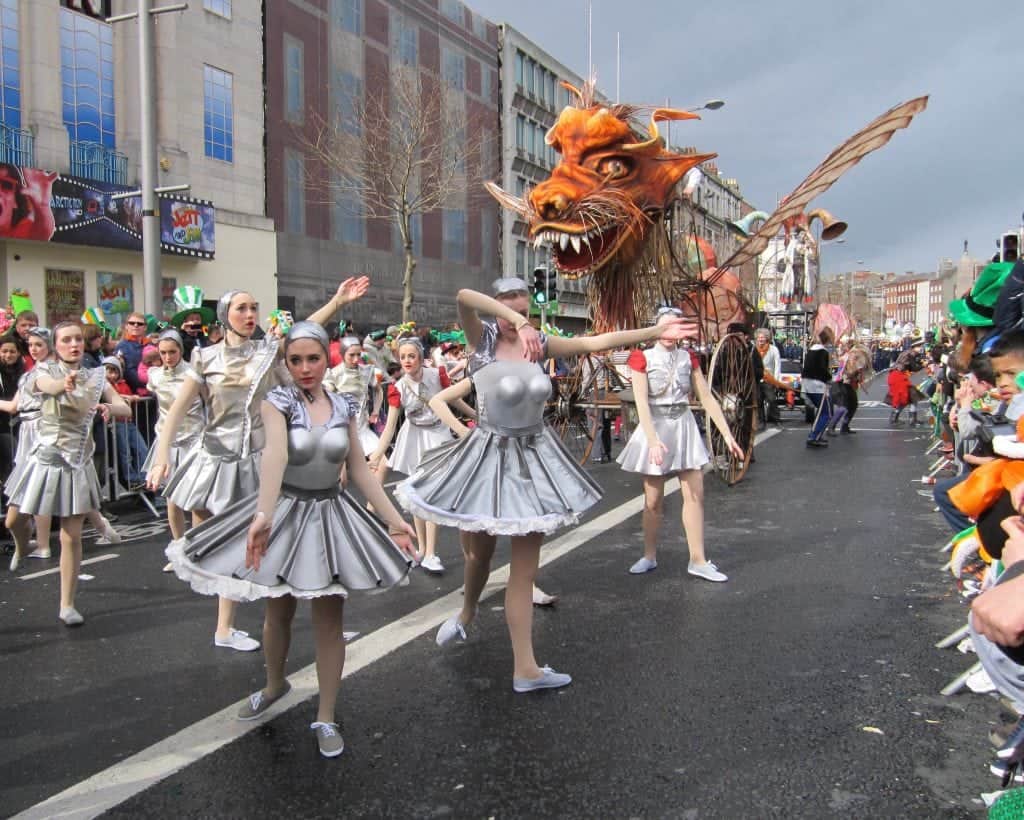 How to Celebrate St. Patrick’s Day in Dublin, Ireland

If you are debating St. Patrick’s Day in Dublin this year, then stop and go immediately book it.  I, myself, was unsure about it because I knew if I wanted to go I would have to do so by myself. While the process getting there wasn’t exactly smooth sailing, celebrating St. Patrick’s Day in Ireland was one of the best weekends of my life.  That was not just a fluke; you can read more about that here.  I really hope you do decide to see Ireland in all of it’s glory during St. Patrick’s Day and if you are here because you already know that St Patrick’s Day Dublin is happening, then read on for more information about your upcoming trip. 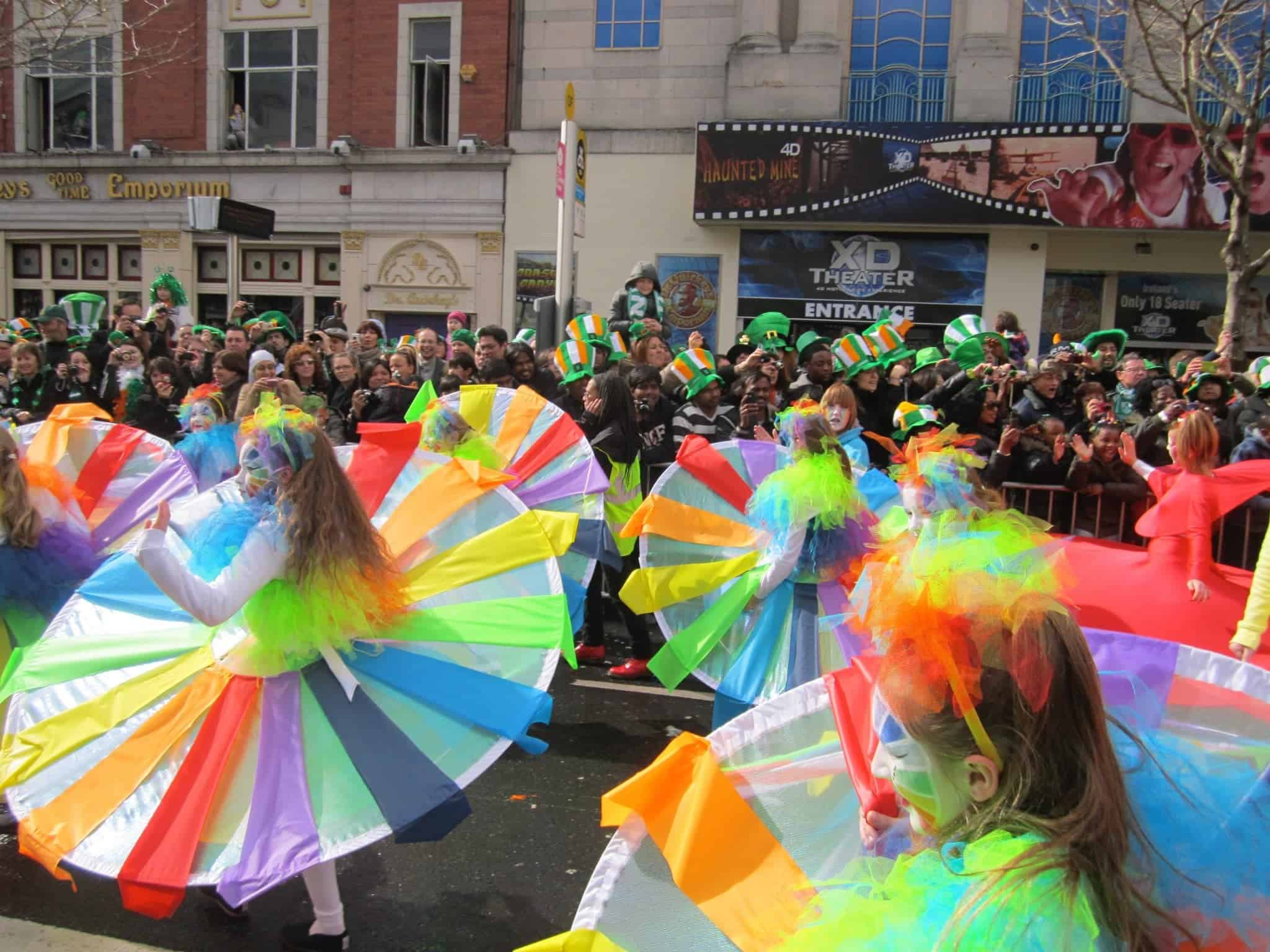 St. Patrick, who is considered to be the patron saint of Ireland was actually NOT Irish.  There is a whole long back story but basically Patrick had a vision that told him to bring Christianity to the Irish people so after quite a long, complicated journey, he made his way to Ireland and received quite an unwelcome reception.  Patrick was forced to leave and moved to small islands off the coast of Ireland where he began to gain a following. He eventually moved back to the mainland to spread his Christian ideologies and ultimately baptized thousands of people.  According to legend, Patrick used the shamrock (three-leafed plant)  to teach the Irish the concept of the Christian Holy Trinity and that is one of the reasons why it became such a popular symbol. While Patrick is not technically a canonized saint by the Catholic Church, St. Patrick’s Day takes place annually on March 17th to commemorate the life of Saint Patrick and the arrival of Christianity in Ireland.  March 17th, however, is actually the anniversary of his death which was believed to have occurred in 461 AD. 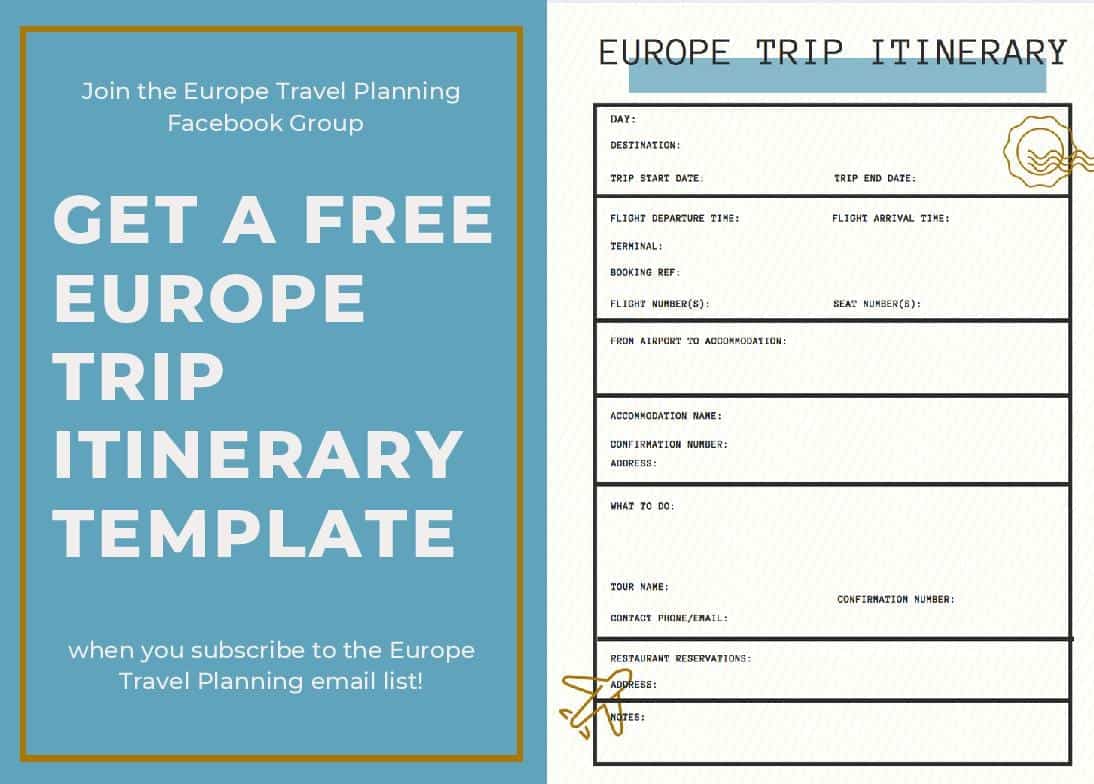 Book early and if you are scheduling last minute…get creative!  I spent hours looking up ways but eventually figured out that the cheapest flight I could get was from Madrid to Porto (I was living in Madrid at the time) and then Porto to Dublin on two separate airlines with enough time in between to not stress about missing my next flight.  I even debated about flying into London and ferrying over.  Do what you gotta do to make it happen!  I use Skyscanner and Google Flights to figure this all out. 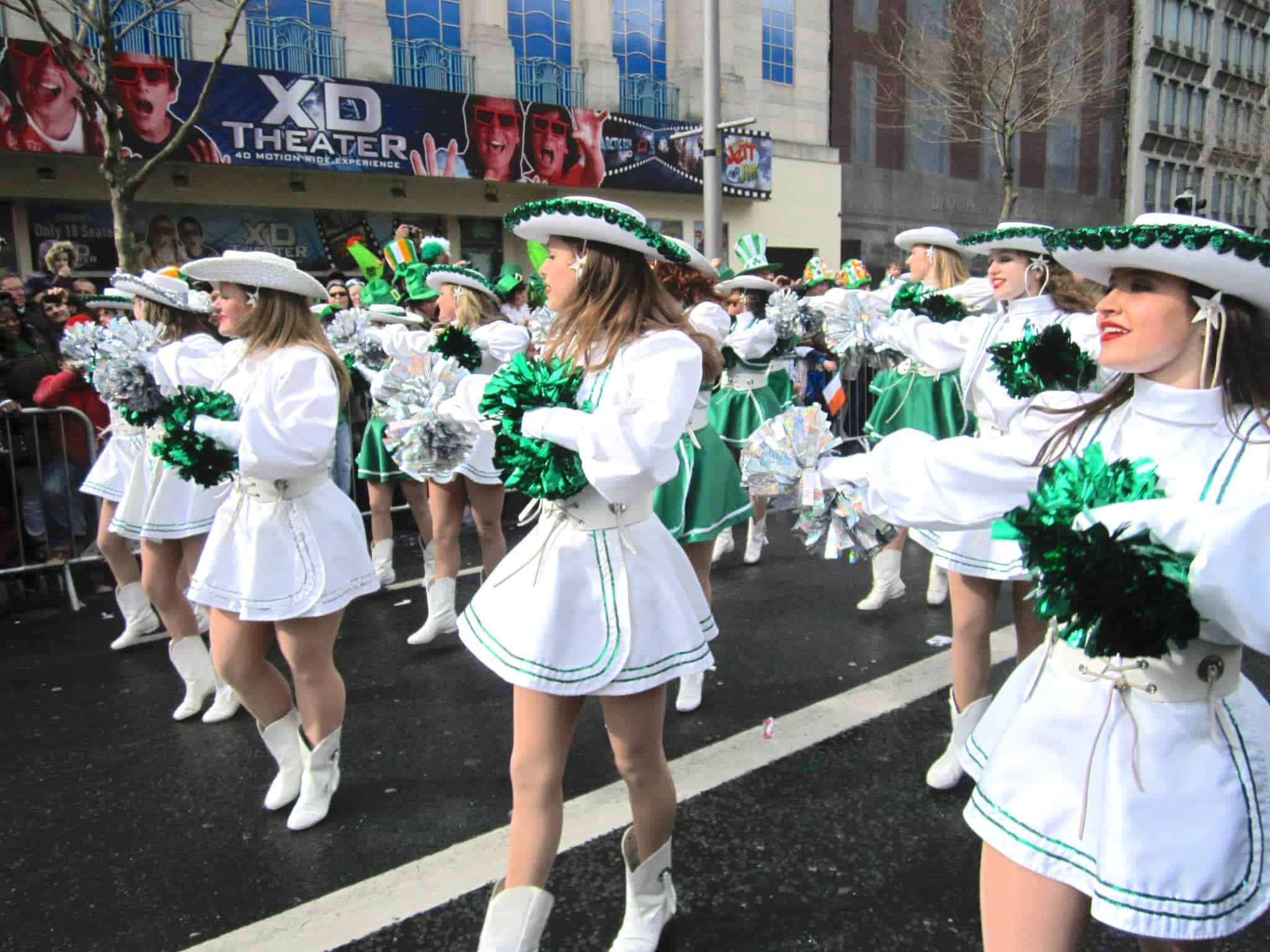 If you read anything at all about accomodation in Dublin on St. Patrick’s Day, you will know that you must BOOK EARLY.  It’s currently February 3rd (so a month and half out) and there are literally no hostels available.  It definitely seems like there are much better deals to be had in terms of hotels as airbnbs are crazy expensive and most are far out of the city.  Here are my recommendations for some hotels and hostels to stay at…

The Merrion Hotel is the highest rated 5 star luxury hotel in Dublin.  Oh, and it is right in the city centre and has a 2-star Michelin restaurant as well. The hotel was created from four Georgian townhouses and is complete with all amenities that you would expect at a luxury hotel.  There are shockingly still rooms available a month out from St. Patrick’s Day and while prices are not cheap, they are some of the most reasonable available.

Herbert Park Hotel is the most affordable option that still has availability for St. Patrick’s Day and with that all said, still maintains stellar reviews.  While it is in the centre of Dublin, it’s a 20-25 minute walk to the festivities but there is also plenty of public transportation options nearby. It’s a 4 star modern hotel with continental breakfast, a fitness center, and multiple dining options.

Jacob’s Inn *where I stayed and recommend

What if you decide to travel solo for St. Patrick’s Day and book last minute (1 to 2 months before)? I can pretty much guarantee that you won’t find a hostel bed to stay at; but, here is my trick that just might be your best option.  There is still decent availability on the night of the 15th to the 16th so stay in a popular hostel for that one night and make your friends then.  You will then have to move over to a hotel for the next couple of nights, but at least you have already met people to spend the rest of the St. Patrick’s Day festival with and you can go back to the hostel each day in the morning to meet up with them. 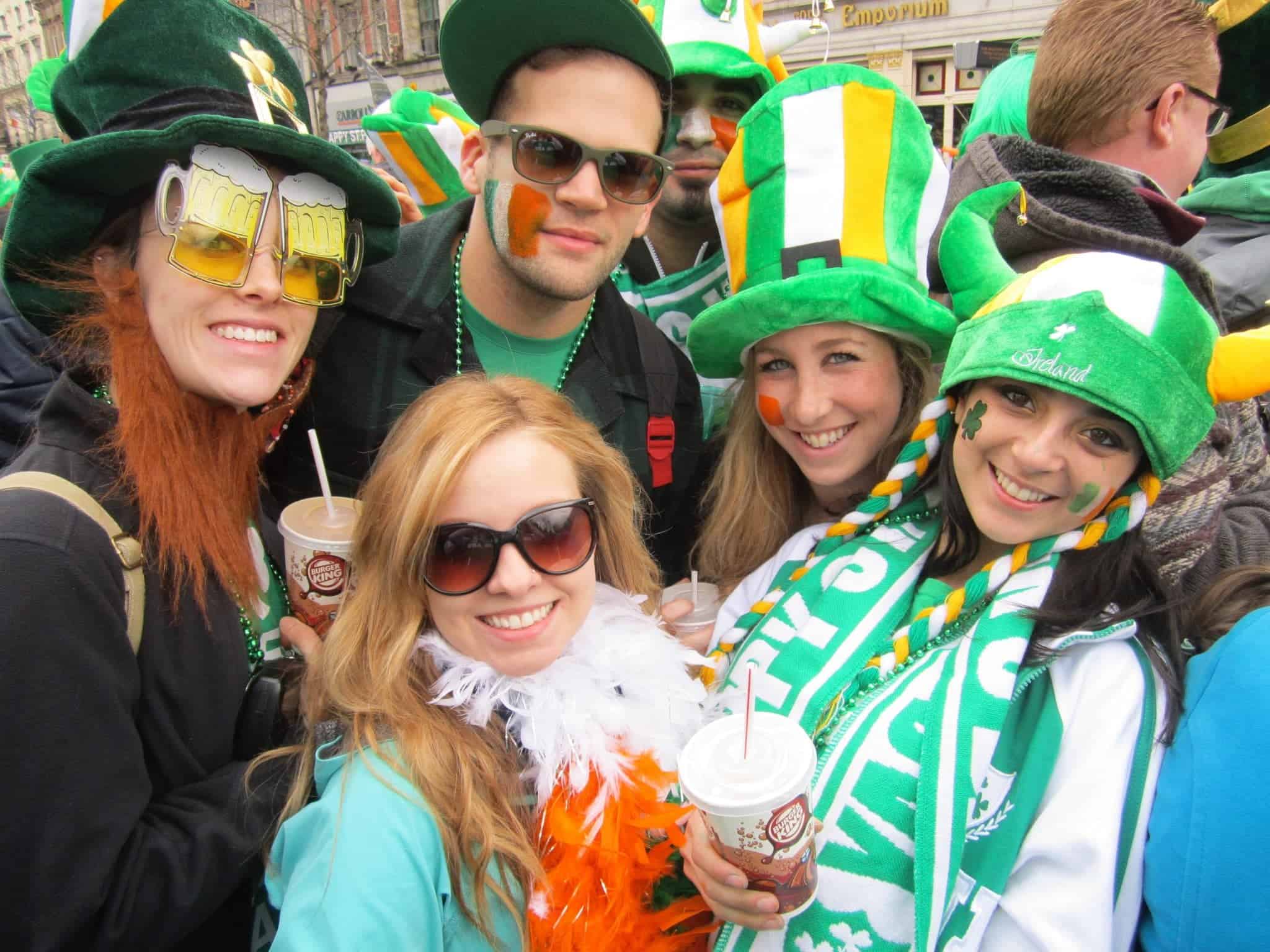 It’s best to be in walking distance to all of the Saint Patrick’s Day festivities because there will be road closures and hoards of people everywhere.  Bring some cute but comfy walking shoes to wear during the day because even though Dublin is a walkable city, it is quite spread out.

The St. Patrick’s Day Festival is a 5-day affair from May 15th-19th, and while you don’t need to be there for all of the days, I would NOT recommend arriving on the actual Saint Patrick’s day date, the 17th.  You will probably miss the main event which is the St Patrick’s Day Parade because that starts early in the morning and the anticipation of the events in the days leading up is much more fun than the days after where you are better off doing some sightseeing instead.

A great event to base your evening around, Greening the City takes place at 6:00 PM during the festival.  During this time, different buildings and venues throughout Dublin will be illuminated green, so be sure to take a walk throughout the city, grabbing a pint or two along the way and check out the lights.

While the parade doesn’t start until 11:00 AM, it is a good idea to get up and moving early.  I would start walking toward the parade route around 9:00/9:30 to scope out the scene and see where you can get a spot.  The parade starts at Parnell Square.  Keep the beer drinking to a minimum at this point because it’s not super pleasant trying to find a bathroom and attempting to get your spot back when you have already kicked back a few beers…yes, I am speaking from personal experience. 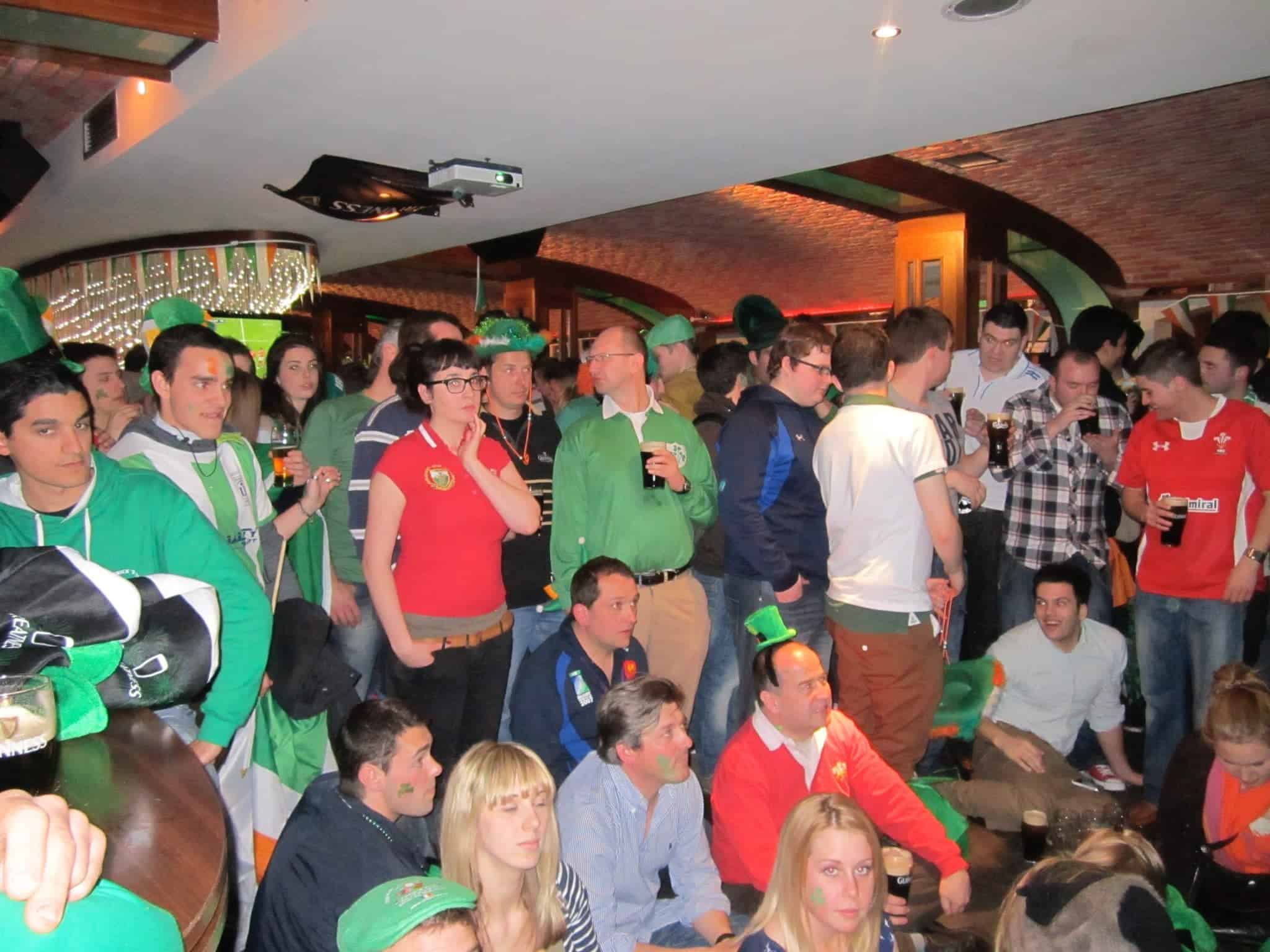 After the parade, everyone heads to the pubs to watch the England-Ireland rugby match.  This was one of the most fun experiences of Saint Patrick’s Day so make sure that you do hit up a pub after the parade and don’t just go back to your hotel/hostel to nap afterward.  Every local pub will be playing the game, so it doesn’t matter which one you go to…just try and find one where you can actually move.  If you can grab a table, even better!

What do you do at night on Saint Patrick’s Day? You celebrate with some good ole Guinness and Jameson!  I ended up doing a Pub Crawl though the hostel which worked out well because it was organized chaos during a time that is ultimate chaos.  I am not usually a huge fan of pub crawls, but by St. Patrick’s Day night you just kind of do whatever falls into your lap.  I mean an hour earlier I was at a tattoo parlor watching some girl get a shamrock tattooed on her ankle. #basic.  It was the perfect night for a pub crawl though because everything was so crowded; I don’t know how we would have been able to get in anywhere otherwise.  If that’s not your thing, go out and find a pub that looks promising…maybe with some live Irish music? 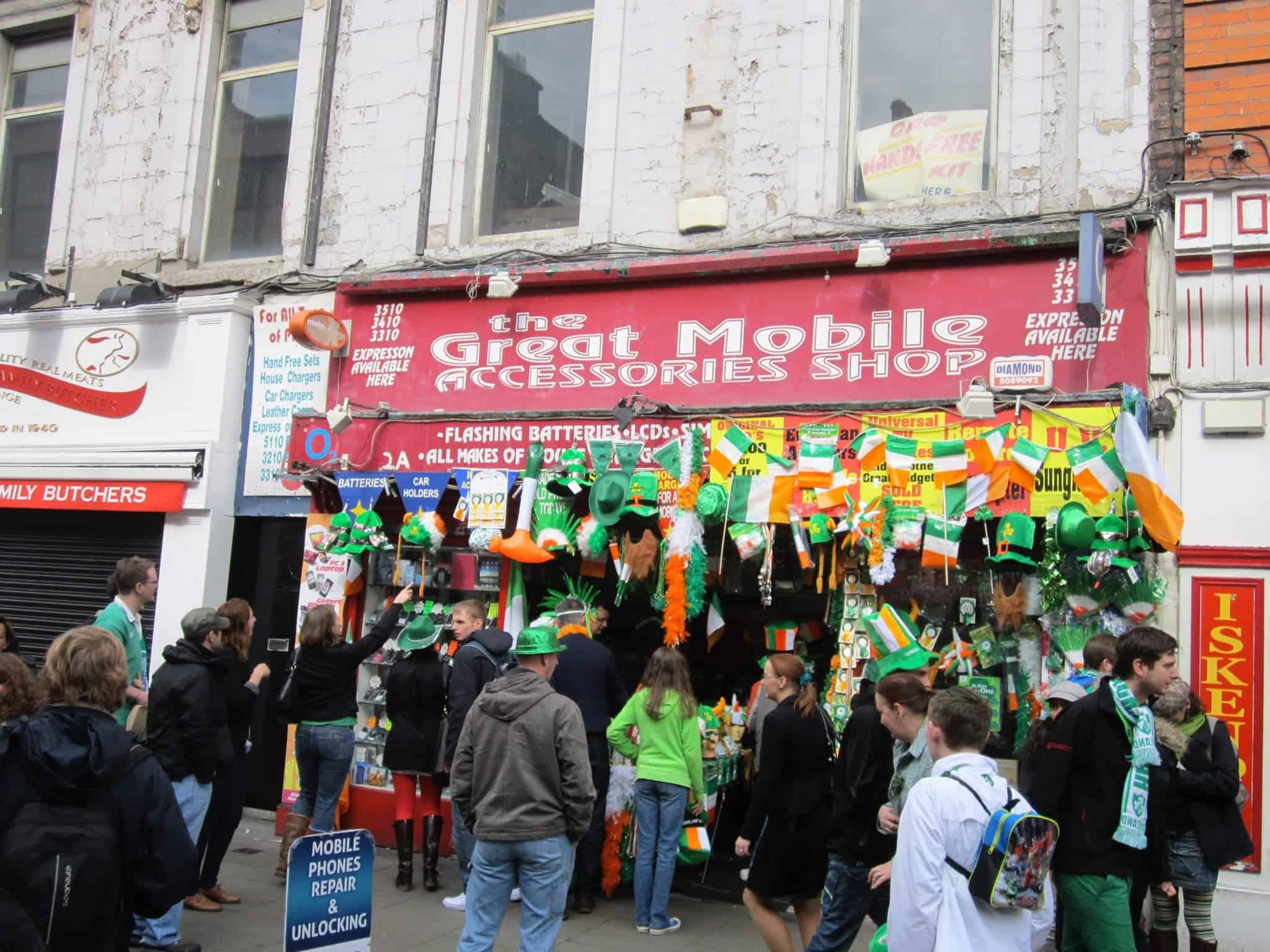 Green! Duh. Bring all the green options you have in terms of clothing, but don’t worry about packing too many costume-y items because they are plentiful and inexpensive in Dublin.  There are shops every few feet with hats, scarves, facepaints, etc. These stores basically have everything you could possibly imagine and they are not outrageously over-priced.

On the days that you aren’t actively participating in St. Patrick’s Day activities, you will have the opportunity to do some sightseeing.  Just keep in mind, that it is obviously a crowded time to be there so don’t put pressure on yourself to have to see everything like you may have if it was a traditional trip to Dublin.  I definitely did not get to see everything I wanted to in Dublin, but those attractions will always be there, unlike the annual St. Patrick’s Day celebrations.

Kilmainham Gaol– A guided tour of a well-restored jail and an informative course on Irish history.

Guinness Factory – The busiest day of the year is on Saint Paddy’s Day and there is really no reason you should go on this day.  Book your tickets in advance either for before or after the 17th.

The Book of Kells and Trinity College Dublin– See this world famous illuminated manuscript that was hand-written and illustrated around 800 AD and walk around campus.

Temple Bar – Is it overrated and crowded? Yes. But, should you go in and have a quick look around and take a few photos…probably.

Day Trip to Northern Ireland, Cliffs of Moher, Blarney Castle, Game of Thrones Film Location Tour, Giant’s Causeway, etc. – I would definitely choose to do this unless you have plans to road trip through Ireland before or after which is obviously the better option.

Irish Dance Show – After the craziness of St. Patrick’s Day is over, it might be nice to enjoy some traditional Irish dancing one evening.  I really enjoyed this. 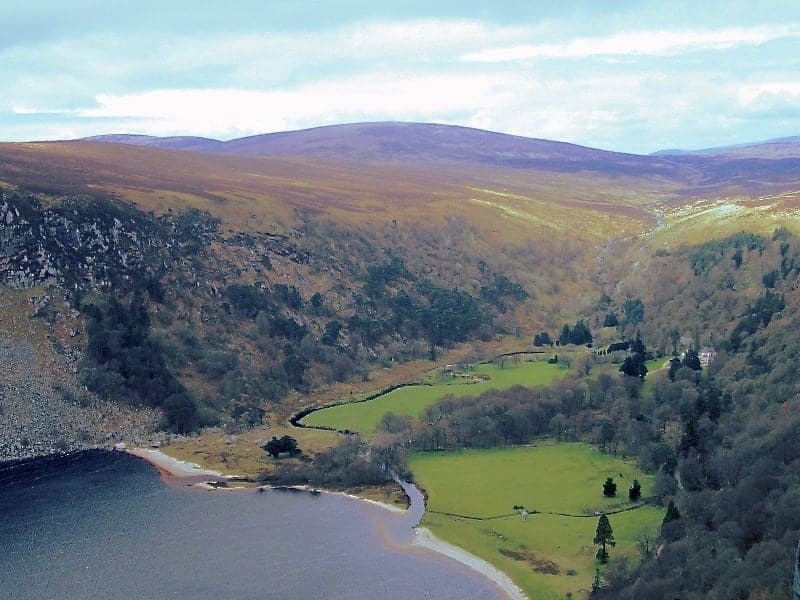 Make sure you buy alcoholic beverages the day before.  I forget what the exact rule is, but I don’t think that they sell alcohol in shops on St. Patrick’s Day until much later in the day.

Count your cash ahead of time so that you don’t have to try to take out money from an ATM on St. Patrick’s Day when the lines are long and the actual banks closed if there is an issue.

Be sure to interact with some of the locals!  I am going to generalize here, but the Irish are some of, if not the friendliest people I have ever met.  I was so struck by the fact that whenever I even reached to take out my map and look something up, there were instantly three people around me asking what I needed help finding.  So thank you, Ireland, for your incredible kindness!

I just want to say that if you are on the fence about going to celebrate St Patrick’s Day in Dublin, then I really recommend you go.  I was really nervous because it was my first solo trip, but it ended up being one of the greatest weekends of my life.  And, I think it will be for you too. If you have been to the festival before, and have any other St Patrick’s Day Dublin information to share, please do in the comments below!