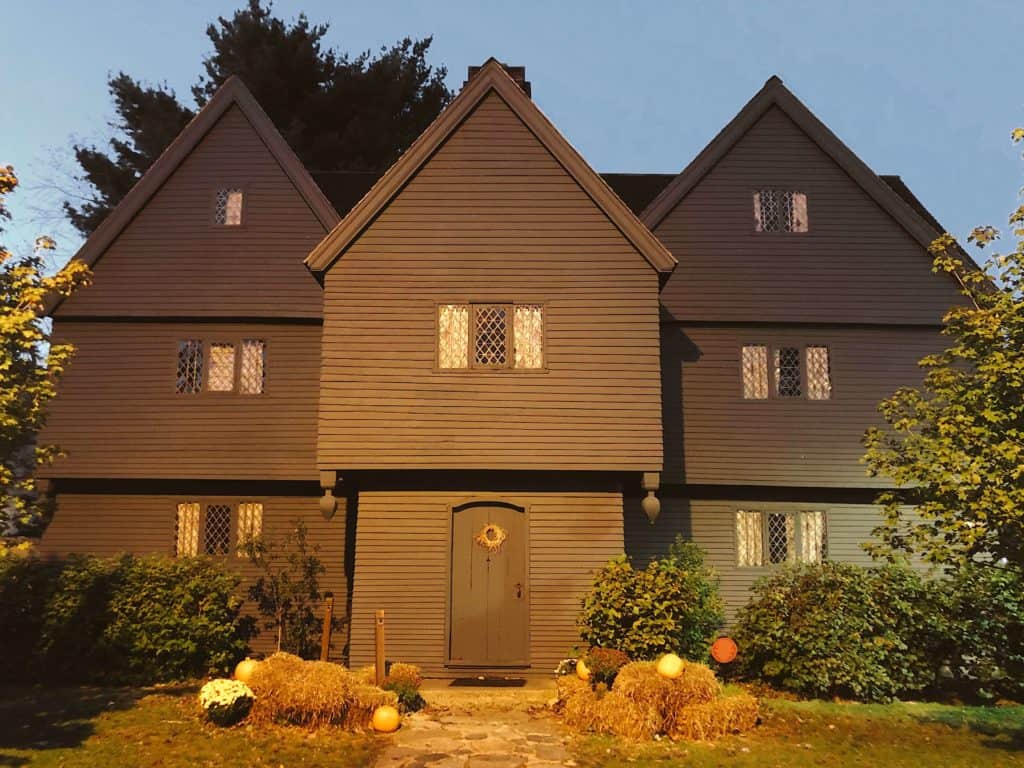 There’s no doubt about it, visiting Salem in October is the absolute best time to do so. It’s festive, the leaves are changing color, and the ghosts are on high alert. I decided to visit Salem twice in October. Once on the Thursday afternoon before Halloween and again on Halloween. And I’m glad I did, so I could write this post and tell you exactly when and when not to visit. Spoiler alert: Halloween ain’t it.

Before my visit to Salem in October, I asked around to try and get a sense of what I should see and do. The majority of the people that I spoke to who had visited said that simply walking around the town and watching the people would really give me a good feel for it. And I absolutely agree. But, for me, learning about the history behind the witch trials and the people that were murdered was equally important. And beyond that, I learned just how old the city of Salem is and its fascinating past as one of the most significant seaports starting as early as the 1620s.

That is why I recommend that everyone takes this walking tour during their trip to Salem: History & Hauntings of Salem Guided Walking Tour. The reviews on the tour are ridiculous. Over 2200 5* star reviews. I booked this tour just 24 hours before – which I don’t recommend since 95% of the tours are sold out this time of year – and the only slot available was at 5PM. I was a little bummed because I really wanted to go on a tour of Salem at night, but let me tell you that this ended up being the absolute most perfect time of day to visit.

Here’s why: This might seem obvious…but it really makes a difference to actually be able to see the prominent sights like the Old Town Hall and the House of Seven Gables in natural daylight. With a 5 o’clock tour and a 2-hour duration, you get the best of both worlds. The first hour or so is spent in daylight and even better, at golden hour. It’s also the time when you are right in the center of town. Then, right around the time you make it to the Salem Witch House, the sun sets and the tour guide pulls out her lantern. I truly thought I would prefer doing the tour in darkness because of the spooky vibes, but the only point where I feel as though it added to the mood was at the final stop of the tour when you visit the Old Burying Point cemetery – notable figure and accused witch Martha Corey was buried here – and the Salem Witch Trials memorial. Otherwise, I much preferred actually being able to see what I was being told about.

A 5PM tour is also great because you’ll be done just in time for dinner at the iconic Turner’s Seafood or Gulu Gulu Cafe. Or, if you’re filled up from a late lunch at Tatte back in Boston, you can grab some ciders and bar food at the Village Tavern. While on the train to Salem, I met a girl who was a hostess there, so we chose to have dinner and drinks at the Village Tavern which ended up being a nice, easy way to let our feet rest after loads of walking.

We had such an incredible experience visiting Salem on the Thursday night before Halloween that we decided to go back on the day of Halloween. What a mistake that was! We were most nervous about parking, but that turned out to be a non-issue. We were able to find a spot about ¾ of a mile away from the town common. Be careful though because if you park any closer, you might get towed. There is clear signage saying that street parking near the center is for residents only. There was tons of traffic getting into the town. It probably took us double the time it normally would have to get from Boston to Salem. And while you wouldn’t have that problem on the train from Boston to Salem, I suspect it was quite crowded on the train and an overall unpleasant experience too.

So why was Salem on Halloween such a nightmare?

As you might expect, there were too many people to do or see anything. The streets were so packed that you couldn’t even properly people watch because you were so enveloped in the crowd. We had tickets to the Peabody Essex museum and wanted to see the Salem Witch Trials Exhibition they had on. At the door, we were told that the museum was completely sold out for the day and if you had successfully procured tickets, the wait to see the exhibition was over an hour long. Plus, all of the restaurants had lines snaking around the building. There was literally nothing to do but walk around amongst the crowds of people or play some carnival games at the Salem Common. Essentially, if you had any plans of actually doing any sightseeing or eating in Salem on Halloween, assume that it will be a fruitless venture. You may get lucky, but I honestly doubt it.

I would imagine watching the Halloween Finale fireworks is fun, but having to hang out there until 10PM does not sound worth it. Plus, I think the crowd gets a little rough as the day drags on.

We only lasted about 45 minutes before deciding to pivot and head toward the North Shore. The scenic drive we took at golden hour from Beverly through Manchester-by-the Sea before ultimately ending up in Gloucester was a trip highlight.

So, in summary, if you do somehow make the mistake of ending up in Salem on Halloween, walk around and stay for an hour or so before heading over to the North Shore for some clam chowder in either Gloucester or Rockport. I can’t recommend Marblehead because you would have to drive through all of the Salem traffic to get there which would be an additional hassle to do on Salem Halloween.

Getting from Boston to Salem:

Having taken both the T and a car to Salem from the Boston area, I’d have to say that both transportation options were quite straightforward.

From Boston, take the train at North Station to Salem Depot. The journey takes about 30 to 35 minutes and costs $8 each way. The easiest way to purchase tickets is to download the mTicket app and buy a digital ticket before you board the train. If North Station isn’t your closest subway stop, you can take the T for 2.90 a ticket from your closest stop to North Station and transfer if necessary.

We opted to drive to Salem on Halloween because we figured the train would be a madhouse. And while the traffic to Salem was pretty horrendous, we did end up finding parking really easily. As long as you plan on walking about a mile into the center of Salem, you should have no issue finding parking. We ended up parking on a side street right behind The Satanic Temple (super creepy on Halloween btw) which is about .8 miles or a 17 minute walk or so to the Bewitched Sculpture and Peabody Street in the center of town.  If you try to park any closer, your car will most likely be towed as there are signs posted all over the city center stating that it is resident parking only. As long as you pay attention and don’t park on a street with the resident parking signs, you should be absolutely fine.

When is the best time to visit Salem in October? And, have you been to Salem for Halloween? Share your thoughts with us in the comments below! And don’t forget to book the History & Hauntings of Salem Guided Walking Tour for your visit!

Don’t forget to check out these other posts on WOAW!

What Shoes to Wear in New York Winter