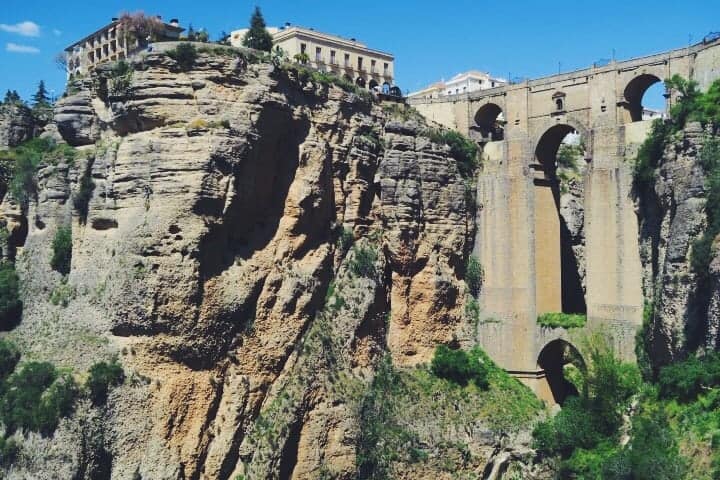 A Guide to Visiting Ronda, Spain

It’s simple…if you see a photo of Ronda, Spain, you’re probably going to be instantly sold on paying a visit to this beautiful city.  That is precisely why I was not at all shocked to learn that Ronda is the 3rd most visited city in Andalusia, the southern region of Spain. Naturally, I felt the absolute need to visit one of the most photogenic cities in Southern Spain as a 24-hour pitstop on the way to Sevilla for Semana Santa.  And if you are reading this post, you probably also thought this picturesque city deserved your time too…and with good reason! 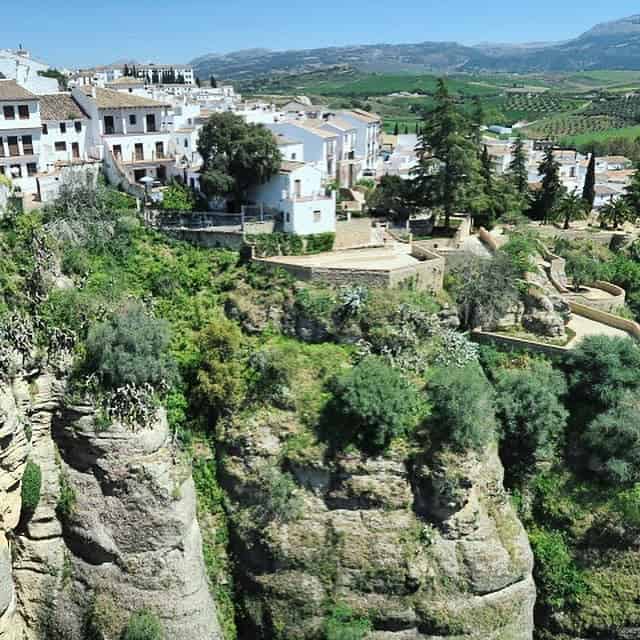 Ronda is located in a mountainous area and is divided into two by the Guadalevín River which runs through the city. The river carves out the deep gorge that separates the old town with the new town by three bridges, the most popular of which is the new bridge, or the Puente Nuevo.  The city is one of the oldest in Spain as it was first settled by the early Celts in the 6th century BC and later became the summer residence for authors Ernest Hemingway and Orson Welles.

Why an overnight and not a day trip?

Ronda is a “day trip” city in which people come from all over the southern region of Spain on guided tours to see the views.  The amount of people congestion during the day (and I went in April which isn’t even high season) is just a lot.  A sunset stroll followed by a glass of wine and a tapas dinner is exactly the sort of peaceful experience that you are supposed to have in Ronda and one that you can have with half as many people if you choose to do an overnight. 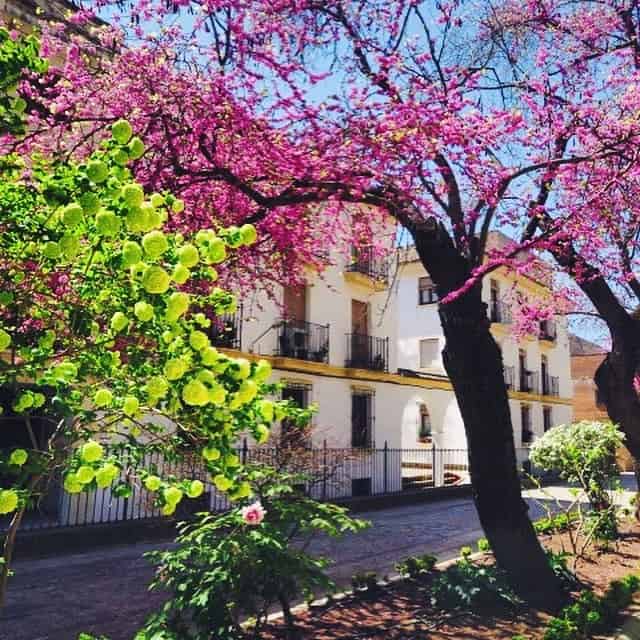 To be honest, I was stressing a bit over the transportation to Ronda because I was in the United Kingdom and wasn’t sure how reliable the bus times listed online were; there were lots of conflicting schedules. So while transportation to Ronda isn’t super clear, there are many ways to get from any of the major cities in Andalusia.  Even if you wing it, everything should work itself out.  If you are taking public transport and can go the day prior to the station to reserve a ticket in person, that would definitely be your safest option.  Disclaimer: All of the links below are to bus timetables and the train booking site.  While they may be accurate now, know that these most likely change so don’t solely rely on this post!

Malaga Airport to Ronda: The easiest way to get from the Malaga airport to Ronda is by taking the Renfe train at the airport until the last stop, Fuengirola.  There is a train every 20 minutes from the Malaga airport renfe station.  Once you get to the last stop, it is super simple to walk across the street to the bus station and take the bus from Fuengirola to Ronda.

Malaga to Ronda:  The bus station in Malaga city center has buses going to Ronda every day.  The two bus companies that do this route are Los Amarillos and Portillo.

Sevilla to Ronda:  There are about 5-7 buses a day leaving from the Prado de San Sebastian bus station in Sevilla (note: there are 2 bus stations in Sevilla so make sure you go to the right one).  The bus company is Los Amarillos and the ride is quite comfortable.  Buses take approximately 2-3 hours depending on how many stops the particular bus will make.

Granada to Ronda: It is much more practical to take the renfe train from Granada to Ronda instead of having to switch buses in Antequera as both train stations are very central in their respective cities.  The journey takes 2-3 hours depending on which train you choose and runs approximately 3 times a day.  Tickets are around 32 euros round trip.

Cordoba to Ronda:  It’s also best to take a train from Cordoba to Ronda as there are no direct buses to and from.  There are about 4-5 different trains a day, the ride lasts around 2 hours, and costs around 50 euros.

Madrid to Ronda: There are a few trains every day leaving from Madrid’s main train station, Atocha, on the Altaria train.  Prices will vary depending on the time of booking but know that they will probably be anywhere form 60-100+ euros. 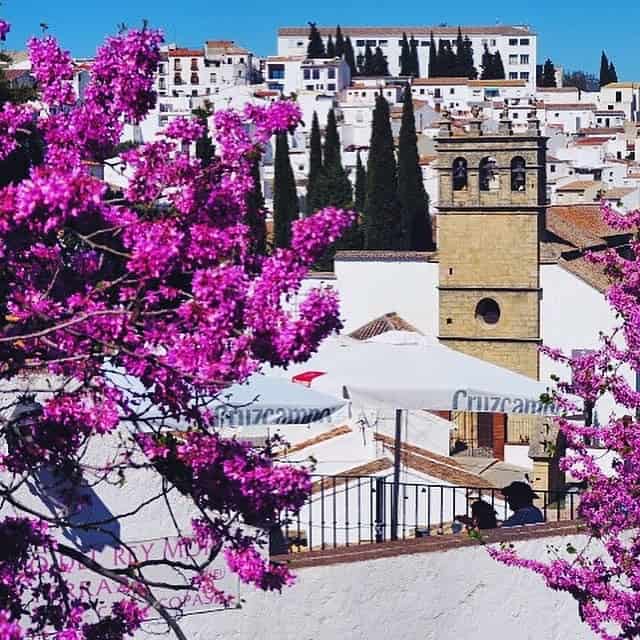 I loved my stay at the Hotel Ronda!!  After a week of hostel living, having my own hotel room at solo traveller prices was a welcome change.  It is located right next to the Puente Nuevo, so you are in the main part of town within 2 minutes and the women at the reception are the absolute loveliest and most helpful.  Small downsides are that it can be noisy from the outside and the shower is small, but the pros make up for it.  The bed is comfortable, there is a breakfast of coffee, cookies, and berries in the morning, and the price is extremely reasonable.  Hotel Ronda is a one star hotel, but Rick Steve’s recommended it, and if it’s good enough for him, then it’s good enough for us!

I’ll be making the assumption that you are arriving mid-afternoon/early evening, because you are coming from somewhere that will take a minimum of 2 hours to get here and if you hate getting up early like myself you’ll probably go for a 10/11 o’clock bus/train.  After you check into your hotel, you you must walk to the Puente Nuevo.  Grab a gelato and enjoy the beauty of Ronda as you start to have a better understanding of the lay of the land.  Make a first right on the street after the Puente Nuevo, Tenorio Street (directionally this makes sense if you are walking toward the old town) and walk until you come across Plaza Maria Auxiliadora and the stairs to walk down to the bottom of the gorge. How great does a glass of wine on the patio of a restaurant sound while you wait until it gets a little closer to sunset to secure a spot in the plaza for an epic sunset view? When I was there in April, the sun set at 8:50 PM!  It was SO nice to have all that daylight.

After the sunset, you have a couple of dinner options.  You can choose to have a fancier dinner at one of Ronda’s gorge-side restaurants; this looks super romantic, so if you are with your partner, I would totally go with this one.  I, however,  went to a very traditional tapas restaurant called El Rincon de la Manzanilla that I randomly stumbled upon.  I was easily enticed by the rowdy cheers of the futbol match that was being eagerly watched inside by a large group of Spaniards , so I figured it must be decently authentic.  By this time, it was 11:30 which is quite early for most areas in Spain, but Ronda not so much, so I went back to the hotel to get some rest. 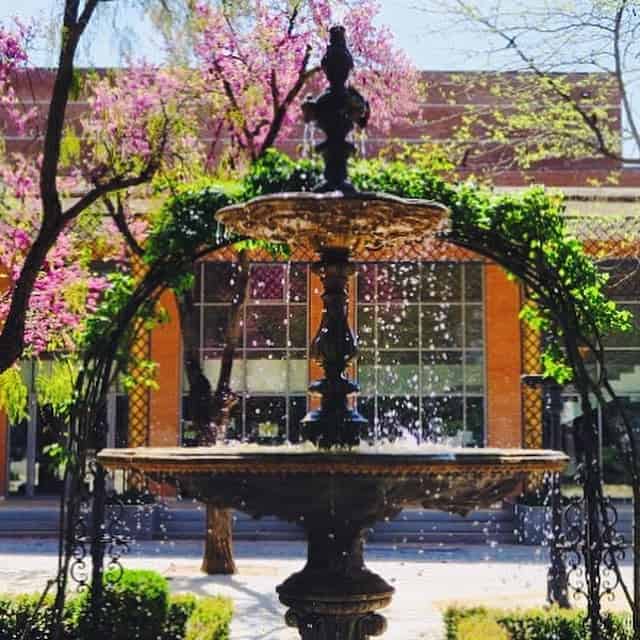 Grab a map from your accommodation and get moving.  You’ll want to head back to where you watched the sunset and hike down the el tajo gorge.  I’ll be honest, I was iffy about doing the hike because it was so hot outside even in April.  But, this experience was the highlight of my time in Ronda.  The perspective that you get of the city of Ronda from below is even more spectacular than from street level.  Grab a large water bottle and give yourself around 2 hours for the hike.   Cool down in Plaza Duquesa de Parcent and hopefully there will be some live music playing as you get those feet ready for part deux.

Head back toward the Puente Nuevo until you get to Santo Domingo street and make a right.  While the old bridge (Puente Viejo) is not quite as impressive as the new one, you do get some spectacular views of the white facades of the pueblo blanco or white towns in Andalusia.

Afterward, I grabbed a quick bite to eat at Cien Montaditos, a large chain in Spain that has over 100 small sandwiches to choose from.  While there are plenty of better places to eat, Cien is nostalgic for me and also super quick and delicious as the 24 hours are winding down.  I ate at the one in Plaza de Espana which is on the other side of the Puente Nuevo.

From there, you will want to continue walking along the edge of the city and admiring the views.  You will quickly run into the bullfighting ring named the Plaza del Torros which is a good place to check out if you have never been to a bullfighting ring before.  Inaugurated in 1785, the ring is one of the oldest in Spain. Finish off your day in La Alameda park before heading back to grab your belongings and heading to your next destination. 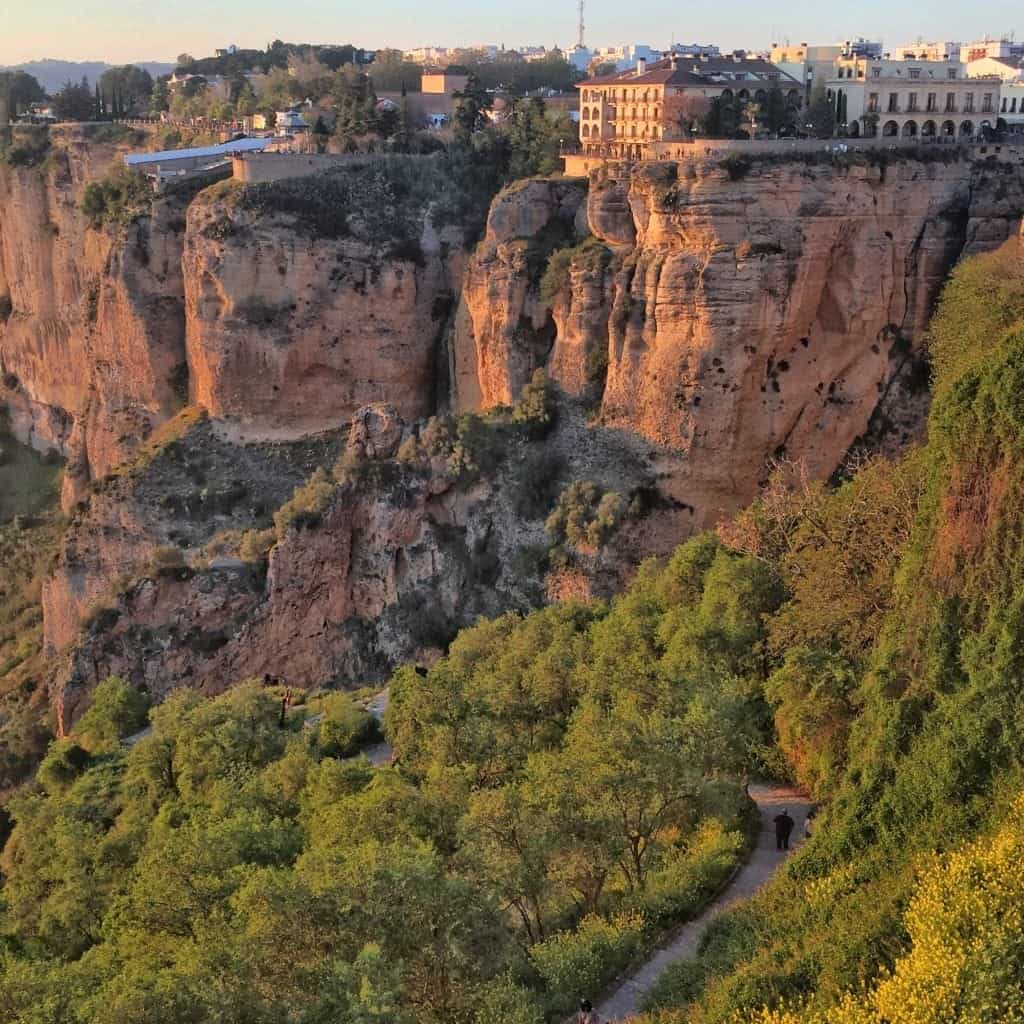 Have extra time in the city?  Check out the arabic baths that are just beyond the defensive walls of the city or stop at one of the local wineries.  I’m a bit of a weirdo because I don’t really like animals but there is a place on TripAdvisor called Reservatauro Ronda that has stellar reviews; it’s a farm where you can learn more about how they raise local bulls and horses.

If you are an avid reader of mine, you may be surprised by the lack of specificity in this post when it comes to creating a detailed plan of what to do in Ronda for these 24 hours.  The truth is that Ronda is a place where you go to relax and enjoy the astoundingly beautiful city views.  To pack in your day with museum-this, cathedral-that would completely negate the sense of serenity that you should find yourself in when in Ronda, Spain.  So enjoy the views, the hikes, the tapas, the horse-drawn carriages lining the streets, and don’t worry that you are missing out on anything because the views are the activity that you come here to do.

Are you on Pinterest? Pin this Ronda itinerary for later! 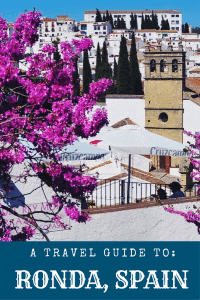 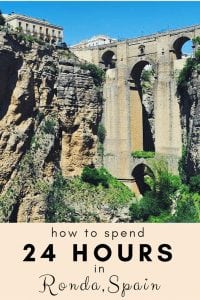 Planning to explore more of Spain?  Check out my 10-day itinerary in Barcelona and Madrid!

This post contains affiliate links which means I receive a small commission if you make a purchase after clicking the link.