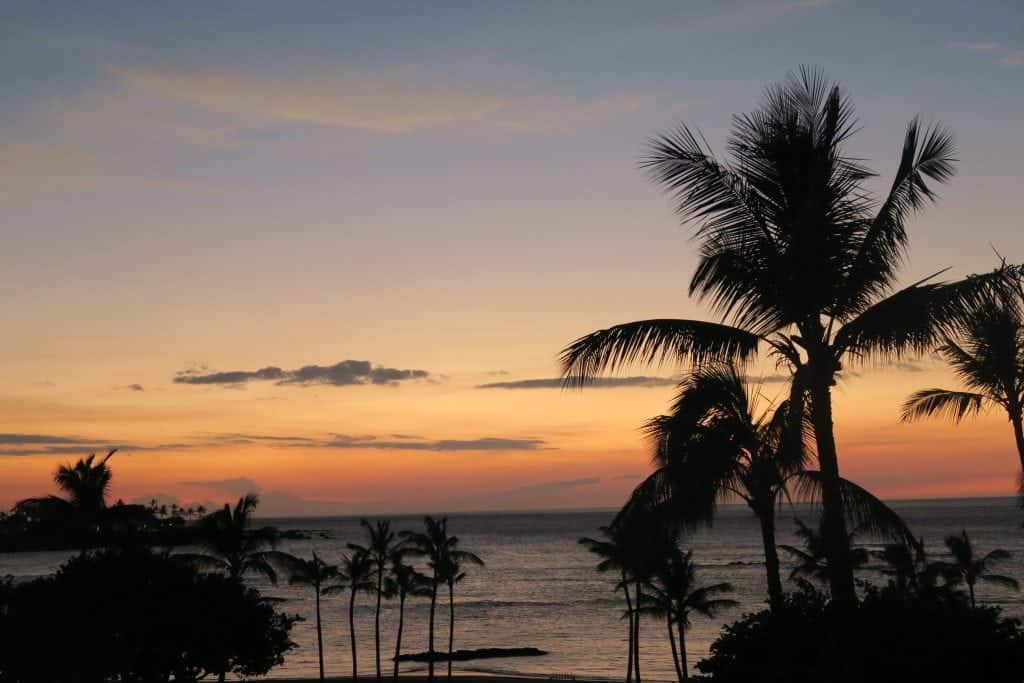 The Big Island of Hawaii.  It’s beautiful and it truly is a place of healing from the stresses of life.  But the island life can be monotonous if you don’t plan for some excursions during your trip.  So many of these outdoor activities involve snorkeling and personally I don’t love the taste of salt in my mouth or scuba diving which I would love to get certified for at some point but have not done so just quite yet.  Also, I have not one athletic bone in my body so anything like surfing is ruled out.  That does take away the majority of the outdoor activities on Hawaii.  However, during my travels back to the Big Island every couple of years to Kona and the Kohala Coast, I have scoured every flyer at the airport, perused all of the tourism magazines in the hotel rooms and read TripAdvisor over and over to find some of the best outdoor activities along the Kohala Coast on the Big Island.  These outdoor activities are expensive.  So I thought I would give you an idea of the options you have available to you and then hopefully you can make an informed decision on which one or ones appeal to you.  Below are the outdoor activities that I have tried and my thoughts on each of them. 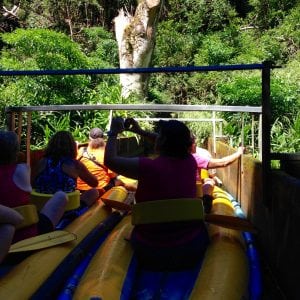 I’m starting with my favorite activity Flumin Kohala, so if you get bored with this post you will have at least heard about the adventure that I deem to be the most unique and most worth the splurge on the Kohala Coast. On the northern tip of the island in a small town called Hawi is an irrigation ditch that was hand built by hundreds of men 110 years ago to bring fresh water to the sugar cane plantations of Kohala. If you decide to go flumin, you will float on kayaks through 3 miles of this “ditch” surrounded by some of the most beautiful scenery imaginable. This activity won’t get your adrenaline pumping, but I guarantee that you will learn way more than you expected and will be awed by the surrounding nature. It’s an adventure that you won’t do anywhere else and wouldn’t want to do anywhere else because I mean, it’s Hawaii and its just that beautiful. The tour is $135 for adults $75 for children, has 4 tours daily, and is about an hour north of Kona. This might sound ridiculous but for me the only difficult part of this activity is that you can’t wear flip flops, but you need “water tolerant” shoes, so maybe head to Kmart in Kona for some of those sexy water shoes? All of those specifics and more are on the website though!

Second on my list is the Kohala Zipline which just so happens to be down the street from Flumin. So if you’re on your honeymoon and want to go all out or if you’re unconcerned about price, you should totally do Kohala Zipline too. I’ll be honest, this was my first time zip lining so I can’t compare this company to others I have previously done, obviously, but I truly had a blast and thought it was absolutely worth it. And the reviews are outstanding, so I am pretty sure it wasn’t awesome just because I was a first timer. Zip lining through the backcountry of Hawaii with 9 ziplines and 5 sky bridges was completely memorable. Also, can we talk about the fact that walking across the suspended bridges was actually much more intimidating than the actual ziplines. I’ll admit though that on the first “zip” I was a bit nervous but as soon as I went it was smooth sailing from there. Also, everything is well maintained and the guides really put you at ease! The 3 hour tour is $165 for adults and $129 for children and there are tours in 1/2 hour increments throughout the day. 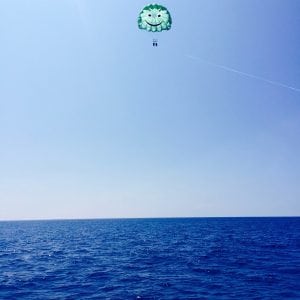 OK so here’s the thing. I was very excited to go parasailing because I have been paragliding before and had the most spectacular time. My brother, on the other hand, was somewhat nervous because he has a fear of heights but wanted to conquer that fear on this parasailing adventure. Ironically, he had a fabulous time and I had a miserable time. But let me first preface this by saying that the staff was wonderful and the company was very professional. Basically, I got soo nauseous on the flight that I had to do everything in my power to keep from vomiting on myself because that’s the way the winds were blowing. My brother, on the other hand, did not find the flight fear inducing at all and loved the peacefulness and serenity of flying 1200 ft above the ocean. So all that being said, if you have nauseous tendencies like I do, skip it because the guy in charge told me that it happens all the time… But if you don’t, it seriously is a great adventure for the whole family and all your friends. The company is called UFO Parasail and the reviews are stellar. So I am not sure if I am just a weirdo but I think it is important to share because no way do I want to recommend something without giving all the facts. Also, the parachute they use is the cutest ever and the boat ride is super fun getting to know all of your other sailing mates. You can choose between the Deluxe 800’ flight and the Out of this World 1200’ flight and you should definitely go tandem as it’s more fun to be up there with someone. Prices are $76.20 and $85.84 online and there are six daily tours.

I searched high and low for a place to jet ski along the coast and there is only one place to do that. The company that does the jet skis is called Big Island Water Sports and they are located on the Kailua pier right next to the Courtyard King Kamehameha Marriot. Here’s why I am torn about whether or not it is worth it to do. You are taken out to this really awesome man-made island in the middle of the ocean. However, there are a lot of restrictions about where you can ride the jet skis and ultimately you end up continually going around in circles around this small island. If you go into it knowing this, you won’t be as disappointed; I highly encourage you to bring food and drinks out on the island and enjoy the day to make up for the fact that the actual jet ski ride is quite limited in its scope.  It’s open daily and there are times available all day, but I recommend going on the earlier side so you can enjoy the perks of having an island to yourself. Prices are $109 per hour, $79 per half hour and $29 per additional rider. 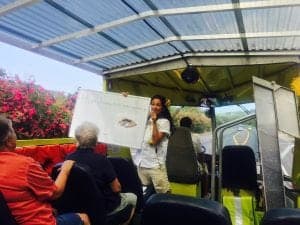 I was very skeptical of going on a duck tour because the first and only duck tour I had been on was a joint 21st birthday party in Santa Barbara, California where they rented out the whole boat and there was tons of beverages and unlimited free chips afterward. However, my mom found a Groupon for the Big Island Duck Adventures tour which made the price very reasonable and the reviews were great. We all had a great time and I think this is a great option for families of all ages. BTW, since I realized I have yet to explain, a duck tour is a tour on an amphibious boat that can go on both land and sea. The couple that started the tour moved from Washington D.C. because of their love for the Big Island and the story of how they started their business is so cute! They were flying back from Hawaii to D.C. after a vacation and saw a duck tour over the Potomac river from the airplane. That is what gave them the idea of how they could make their dream a reality and move to Hawaii. First of all, I loved how charismatic and incredibly knowledgable they both were and I actually learned a ton about the history and culture of Hawaii through their trivia contest they played throughout the tour. Tours are Tuesday – Saturday and are $50 for Adults and $35.00 for Children. 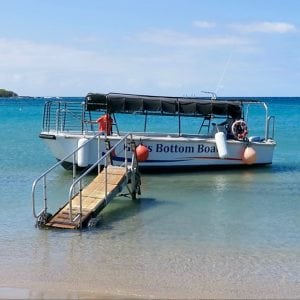 The thing I love most about the Ocean Sports Glass Bottom Boat tour is that it is relatively inexpensive compared to the rest of the other outdoor activities which is a refreshing change from 99% of the rest of the activities on the Kona-Kohala coast. Prices are $27 for Adults and $13.50 for Children. This 30 minute boat tour around Anaeho’omalu Bay in Waikoloa is a great way to see some fish without having to go out deep into the water. The best part of the tour was seeing the sea turtles both below the glass and also frolicking in the ocean waves right alongside you. Tours are daily starting at 9:15 and I would definitely make a reservation in advance. Also, you might not get wet on the boat, but you have to walk in the water onto the boat, so don’t wear sneakers or long pants!  I learned my lesson…

While we are still on the topic, I thought I would share a list of some of the other places I have been near the area that would make for other exciting excursions: Pu`uhonua O Hōnaunau National Park otherwise known as the Place of Refuge, Mountain Thunder Kona coffee tours, and something I have yet to do but heard about on the duck tour and will be definitely be going to next time…Vanilla Experience Luncheon & Farm Tour.

Do you have any outdoor activities to add that I have yet do?  Please share in the comments below!  Also, check out my Hawaii vlog on my YouTube channel to see “What I Do In A Day” on the Big Island of Hawaii!  You’ll see some of these outdoor activities and more 🙂