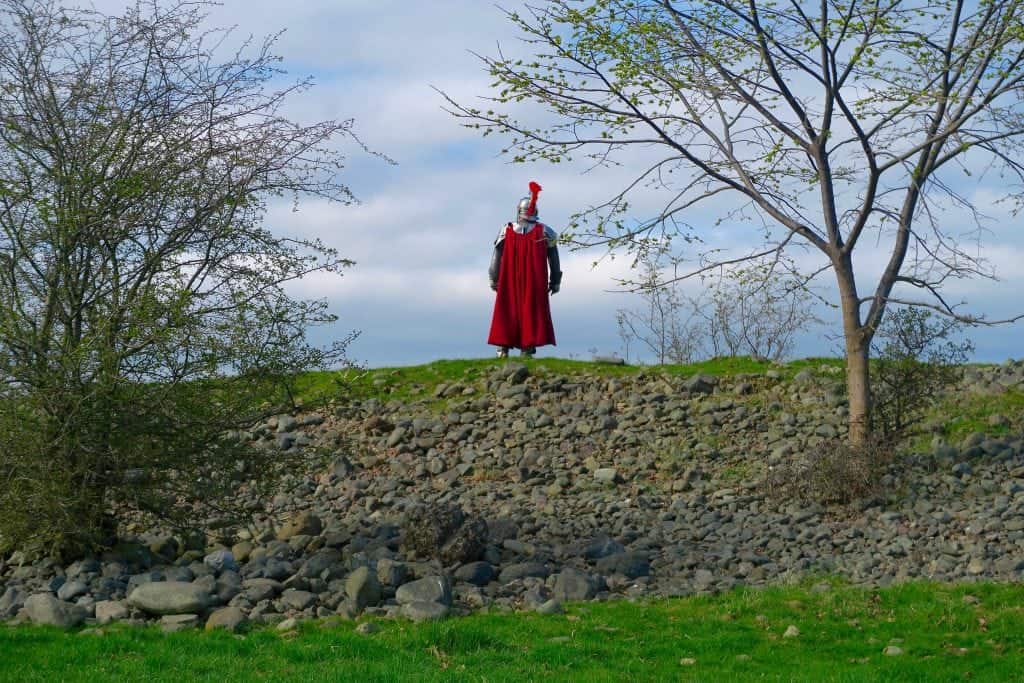 Visit The Sights of King Arthur in Britain

King Arthur: A Man Known By All, But A History Understood By Few

I can’t quite pinpoint when I was first taught the legend King Arthur, whether it was in a children’s book or film or a European history class.  But regardless of the source, the narrative of King Arthur is learned by most everyone, especially during childhood.  So whether Arthur was a king of Britain who defeated the Saxons and established an empire in the late 5th and early 6th centuries AD or a figure of folklore, there are connections to the Excalibur sword, the enemies he killed, and the company he kept found throughout Wales, Cumbria, and the Scottish Highlands.  When Warners Brothers and Visit Britain invited me to visit some of the most significant of these locations before the release of the King Arthur: Legend of the Sword movie coming out this week, I jumped at the chance to see these sights and share them on the blog.  So on your next trip to the United Kingdom, you too can experience the magical landscapes that were once the old stomping grounds of one of Britain’s most epic legends. 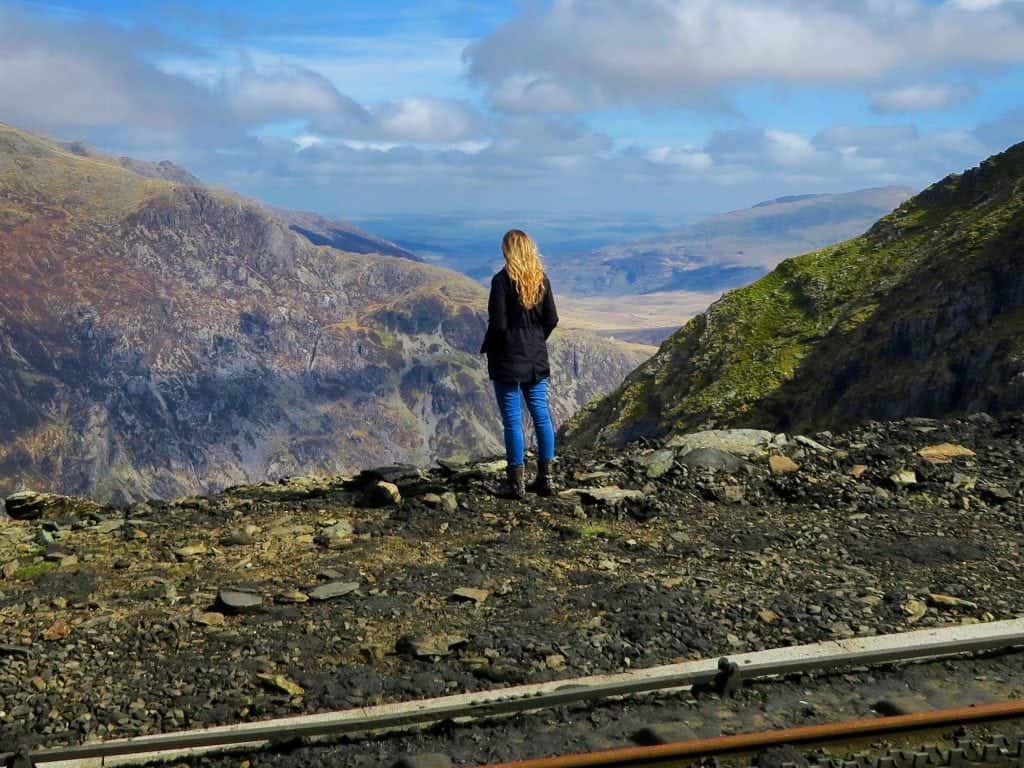 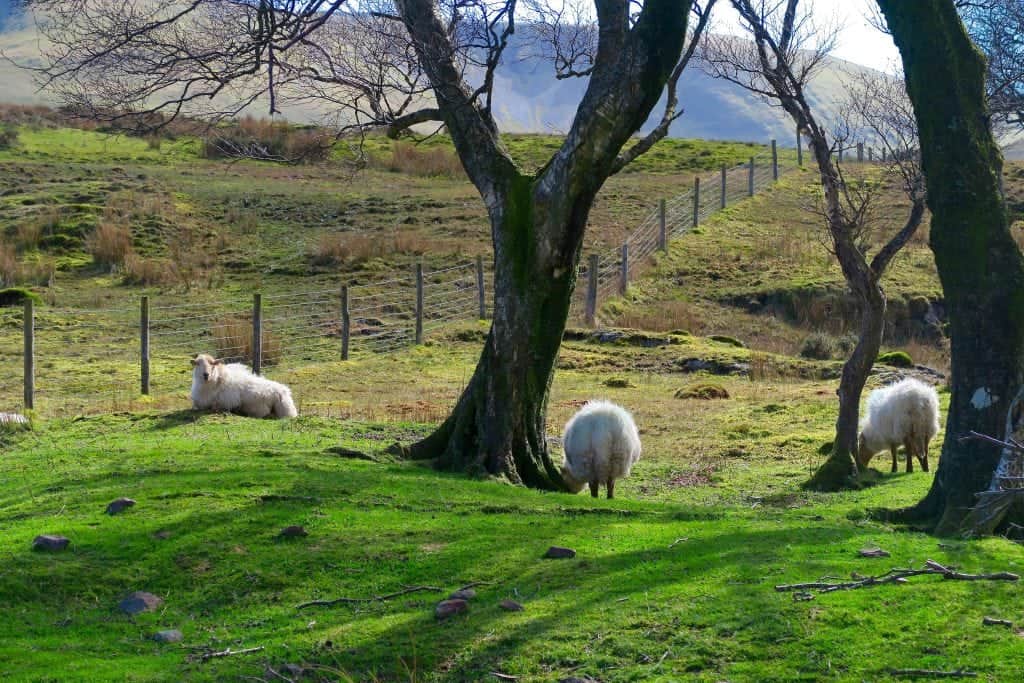 The highest mountain in Wales and England, Mount Snowdon is accessible by 6 different hiking paths which take you up the 1085 meters to the top.  It was also the mountain where King Arthur apparently defeated the evil Rhitta, a giant who created a cape for himself from the beards of his slain enemies.  Rhitta’s corpse was said to have been covered in huge stones by Arthur’s men at the summit of the mountain…so hopefully you won’t be getting the mountain views with a side of remains if you know what I’m sayin.  Mount Snowdon is also famous for being the “practice mountain” for Edmund Hilary and Sherpa Tenzing, the first men to reach the summit of Mount Everest. 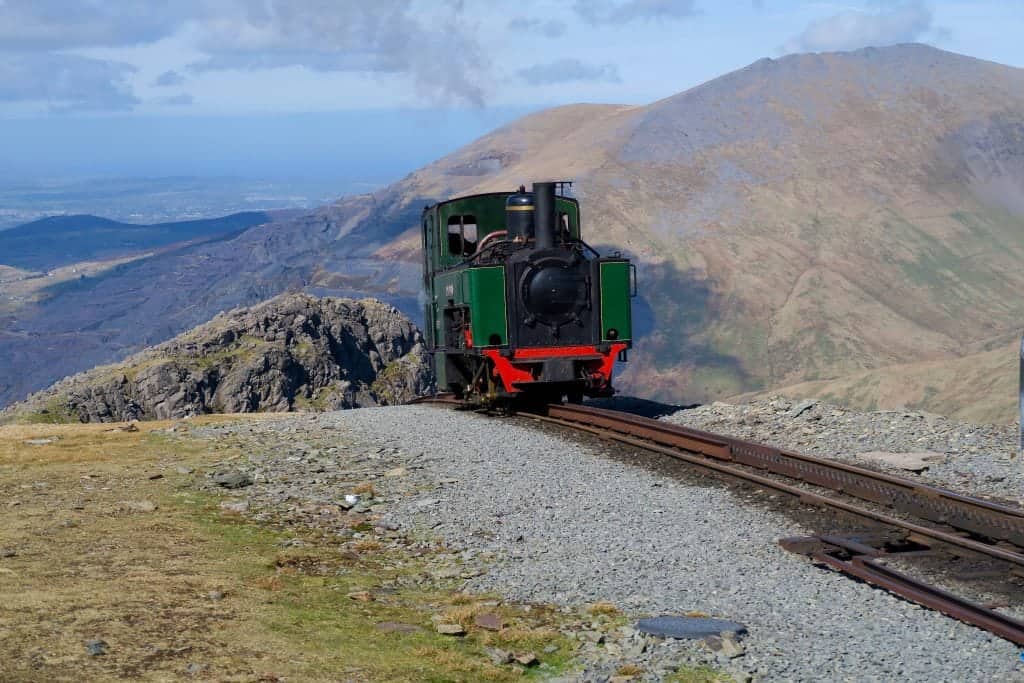 Should you not be inclined to hike up the mountain (I put myself in this category), then be sure to take the Snowdon Mountain Railway up the summit for the best views of Wales ancient landscapes and coastline. Weather permitting, the railway, which was established in 1896, has trains that run daily between March 17th and the end of October.  Depending on when you go, the train will stop either at Clogwyn station or it will take you up to Summit Station.  You can choose between the diesel service train or the steam service train; whichever you decide, I highly recommend waiting to watch a steam train go by as it is a sight to behold.  You then have the opportunity to hike all the way back down to the bottom of the mountain or take the train back. 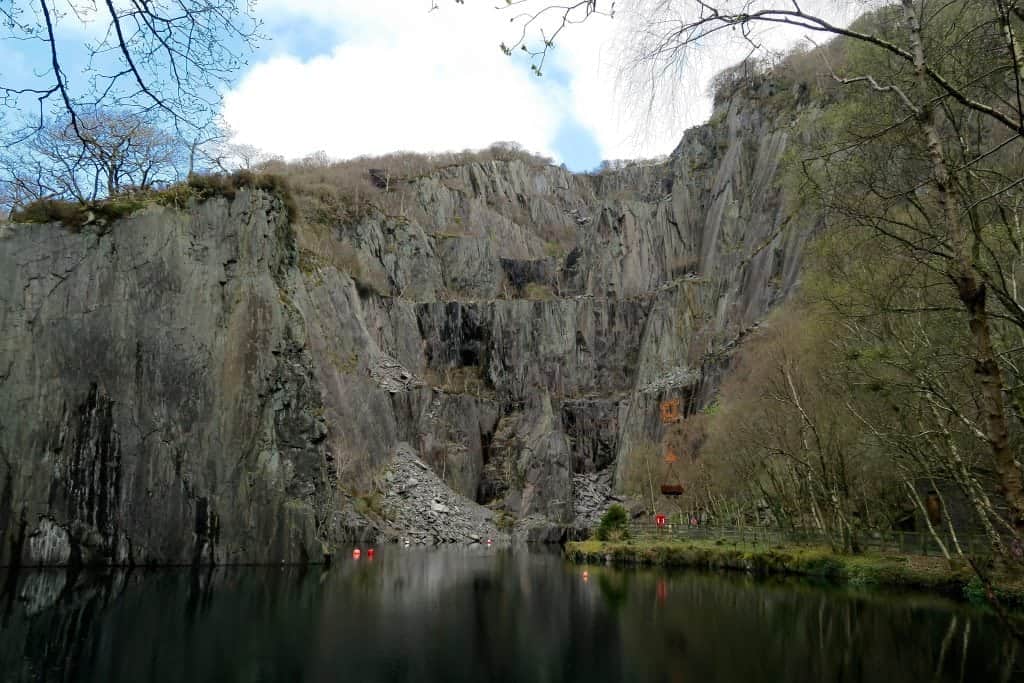 Remember when King Arthur/Charlie Hunnam/a very brave and highly skilled stuntman jumps 80 feet off the top of a mountain in the movie trailer?  Well, that was filmed at Vivian Quarry, another absolutely stunning landmark in Snowdonia just across the street from the Snowdon Mountain Railway’s Llanberis Station.  The quarry is not overrun by tourists even though it is just across the way and is definitely worth a quick pitstop before you head up the mountain! 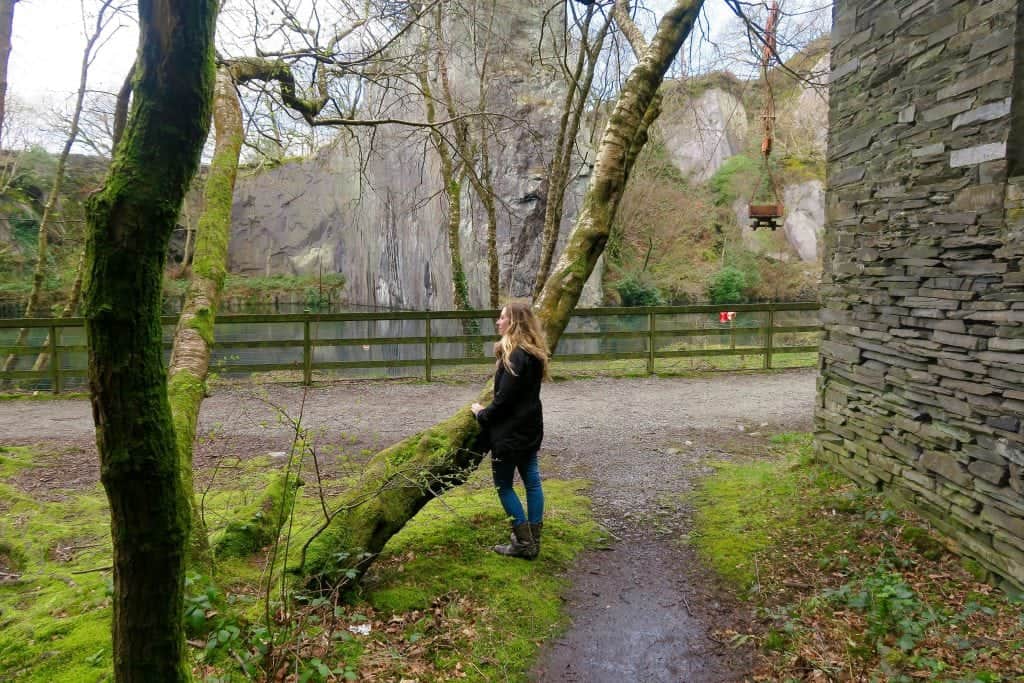 Unfortunately, you are not going to be bungee jumping off the Vivian Quarry any time in the near future BUT you can go scuba diving at the site.  Also, Snowdonia just so happens to be a hub for extreme sports, so you can absolutely get your adrenaline on just like King Arthur did in the film.

Extreme Sports that you can do in Snowdonia include:

Zip World Velocity: The longest zipline in Europe and the fastest in the world!

Bounce Below: Cave jump in trampoline style netting underground in a former slate mine

Surf Snowdonia: Ride the waves on a powerful man-made lagoon

Coasteering: Rock climb, cliff jump, and swim all the while exploring rocky coastlines. 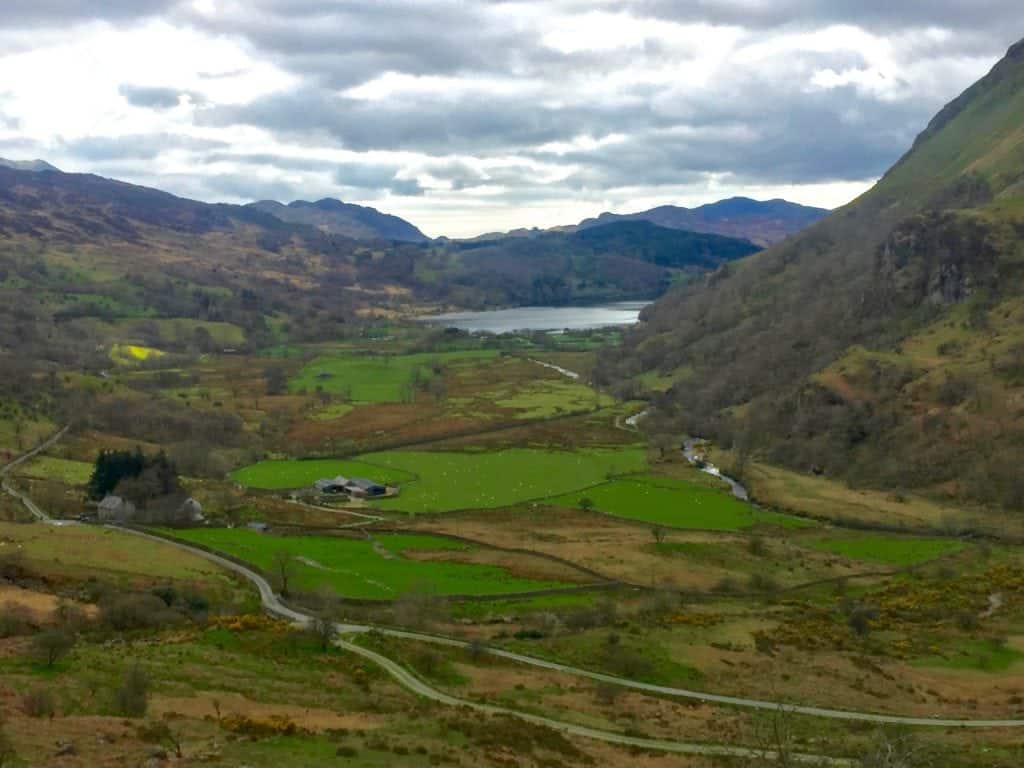 Drive along the A498 for a stunning viewpoint of the Llyn Gwyant valley below and Snowdonia’s mountainous landscapes.  Give the final trailer a watch and you’ll notice a scene in which Jude Law as Vortigen asserts his power over the people as he stands over them at the pass.  The cast and crew filmed here quite extensively on the Llyn Gwyant campsite. 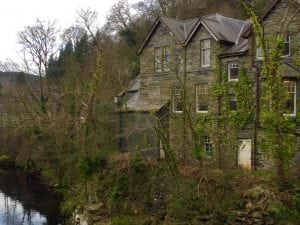 The location manager for the movie shared that the majority of the crew (I saw most because there weren’t enough rooms for everyone in the quaint town of Betws) stayed in this stunningly beautiful area over the course of the six months that they spent in Wales.  Make sure to walk along Pont-y-Pair Bridge for gorgeous views of the River Llugwy.  Oh and pro-tip from the location manager herself… try the welsh lamb and cheese at the Ty Gywn for a fantastic meal as it was the crew’s favorite. 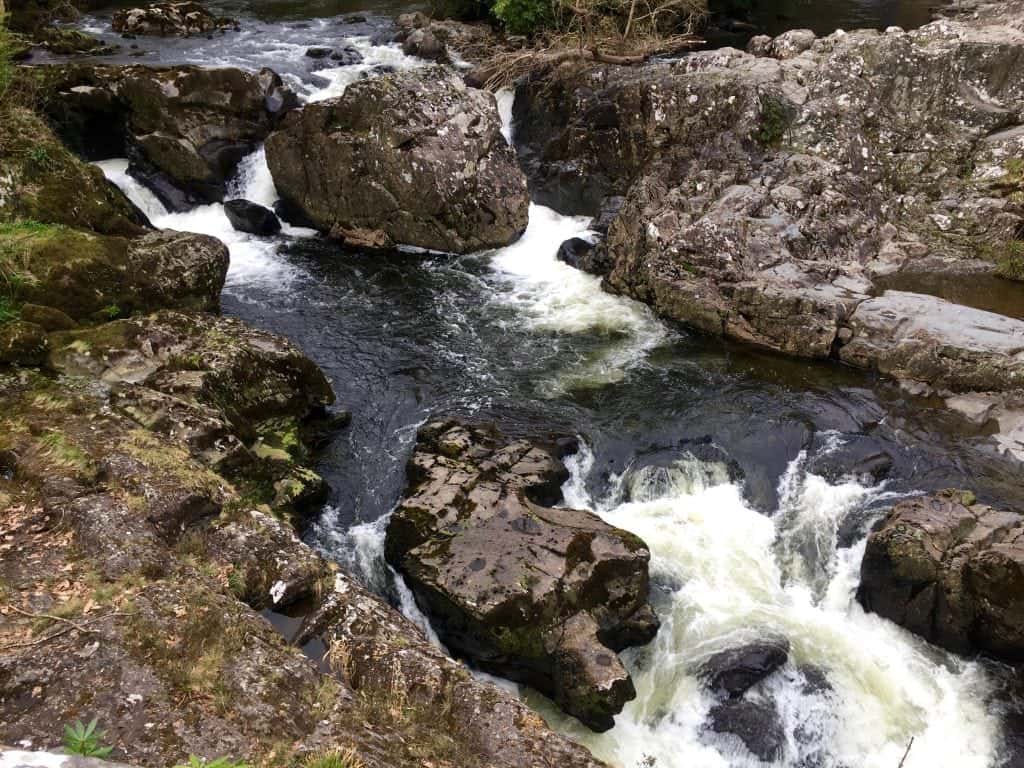 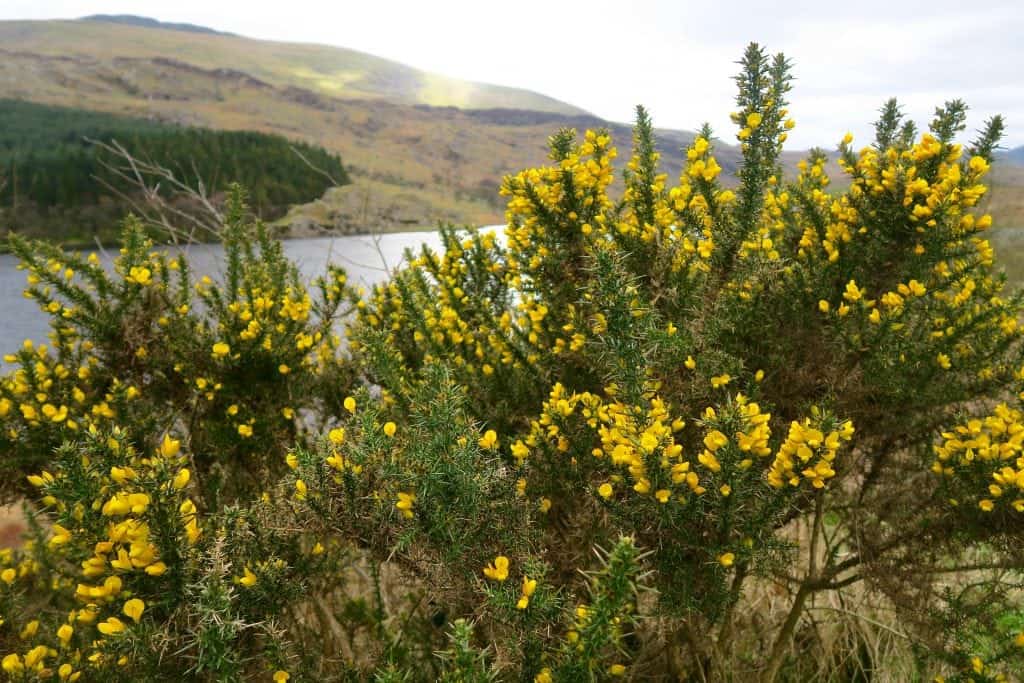 If you’re wondering where King Arthur’s magical sword, Excalibur, currently resides, then you probably want to start by thoroughly examining these three lakes.  Luckily, the three are all located quite close to each other.  Some say that Sir Bedivere threw Excalibur into Llyn Llydaw after Arthur’s death, and that this was the lake that Arthur sailed across to reach the magical isle of Avalon.  A different tale suggests that the sword was thrown into Llyn Ogwen.  While the whereabouts of the sword may still be a mystery, I can confirm that much of the movie was filmed on these lakes. 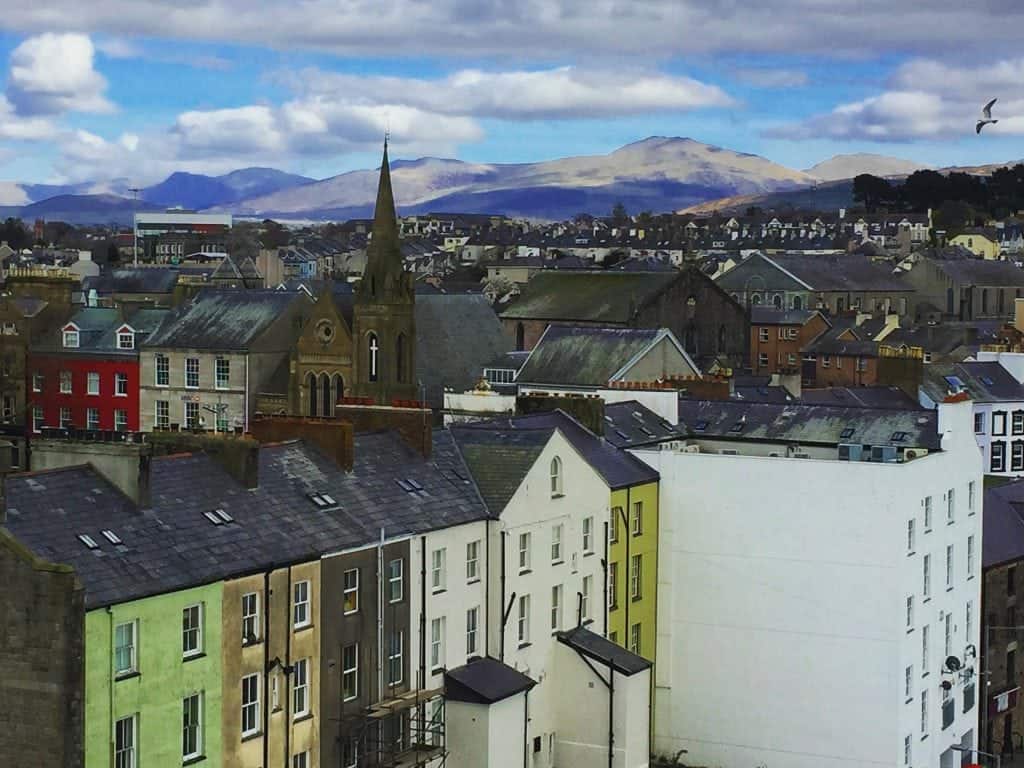 Caernarfon, a small town filled with pastel-colored buildings AND a legendary castle inspired by King Arthur himself, is truly a remarkable place to visit and one where I felt instantly at home.  Just along the border of Snowdonia, Caernarfon oozes charm.  Stay overnight at an inn and eat some traditional pub food all the while exploring the town and its most famous landmark, Caernarfon Castle. 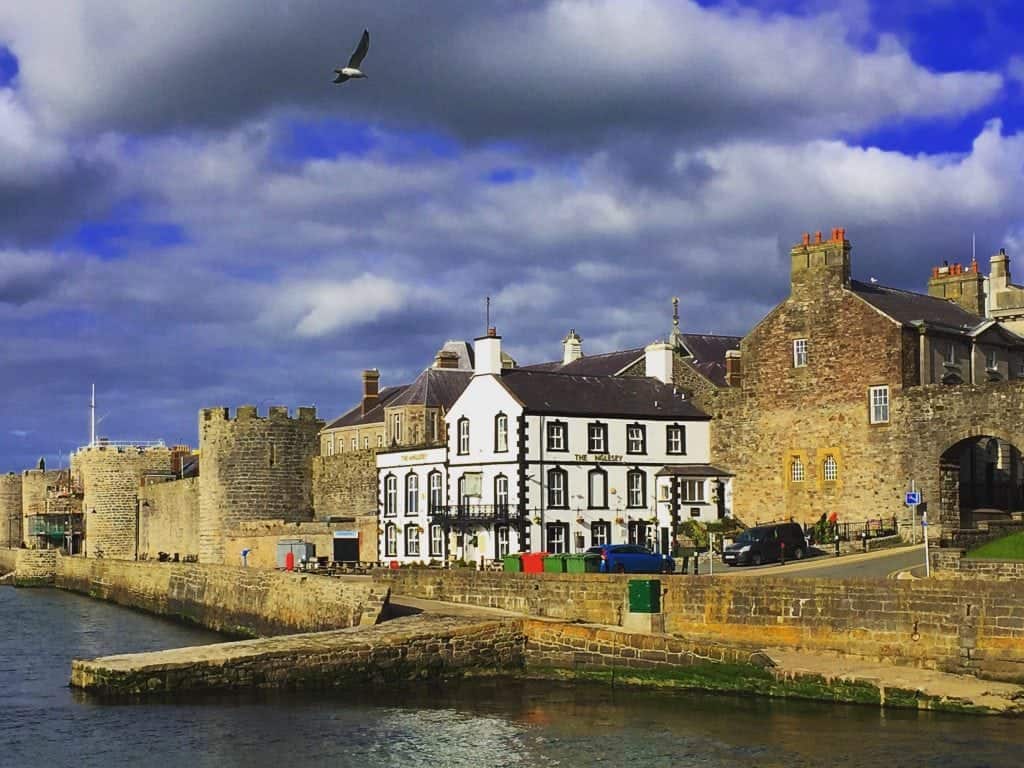 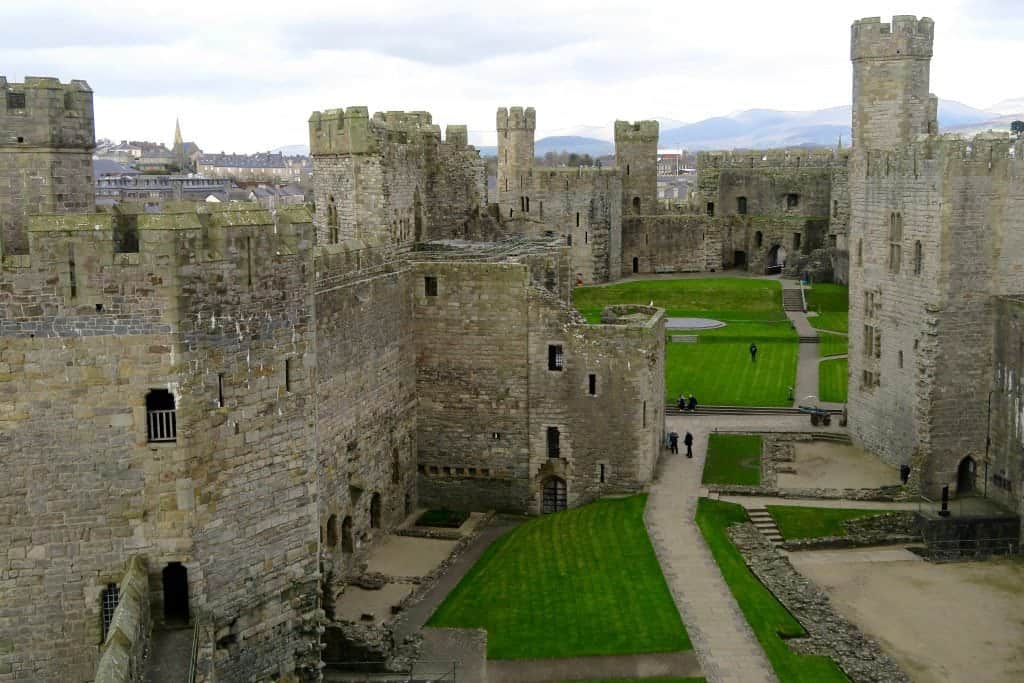 Constructed in 1283, Caernarfon Castle was built in a polygonal shape on a former Roman fort by King Edward I who was completing his conquest of Wales at the time.  He claimed to have some shared lineage with King Arthur to strengthen his reputation and claim to the throne and built this grandiose castle to scare off potential enemies.  Caernarfon Castle is also the birthplace of the first Prince of Wales in 1284, so if you are wondering why the heir to the King of England is also the Prince of Wales, this would be the reason! (total lightbulb going off in my head moment when I found that out) 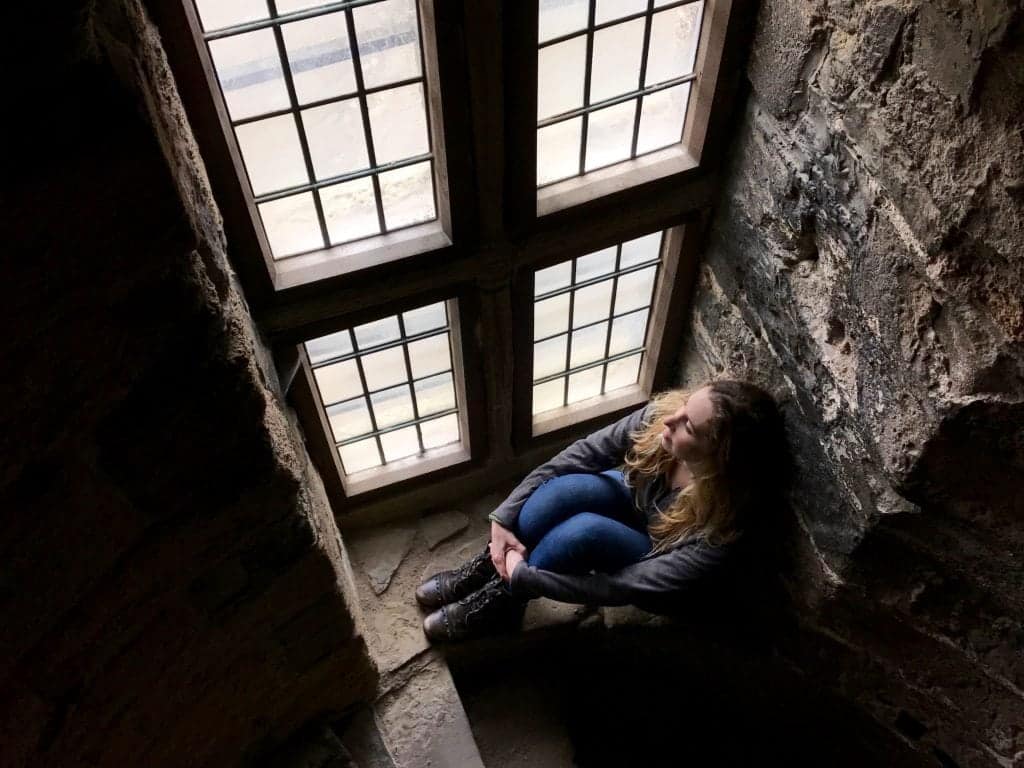 There is something about this place whether it be the views, its generally imposing nature, or how well it has been preserved that make it an absolute thrill to explore.  And it’s also not half bad for a solid game of hide and seek.  And if climbing a mountain in Snowdonia wasn’t enough of a workout for you, I promise that after climbing a few of these towers here, you won’t need to hit the gym for awhile. Definitely check out the Eagle Tower for a full view of the marina and a panoramic view of the town of Caernarfon. 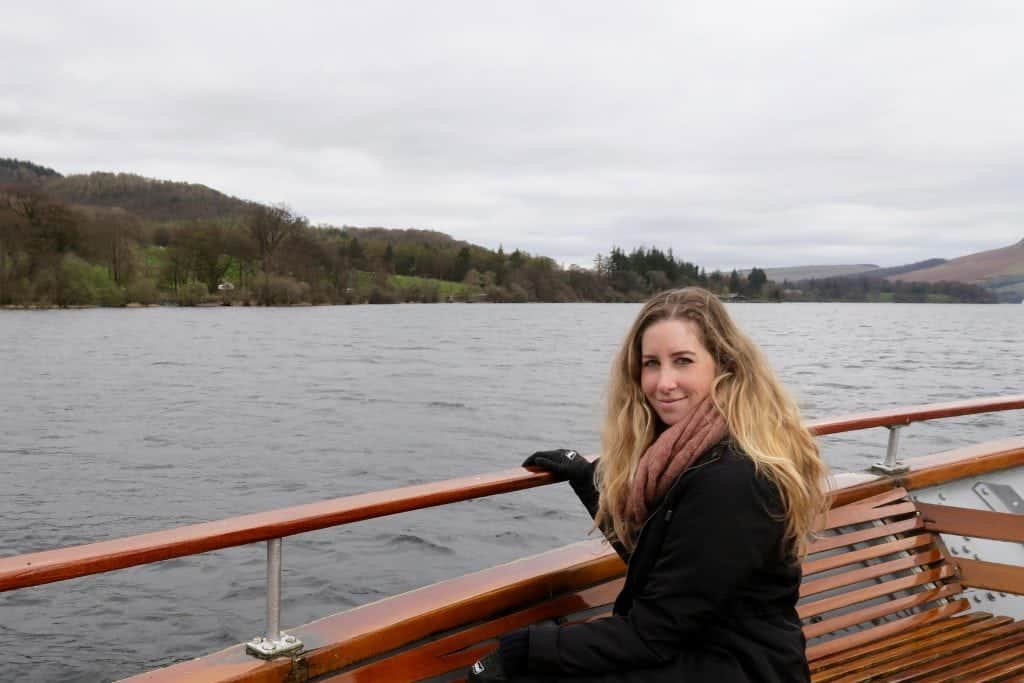 Venture from Wales to Northern England for a ride on a historic steamer across Ullswater Lake or the Dark Lake as it was known in medieval times.  Our steamer was named the “Lady of the Lake” which is coincidentally (?) also the name of a character greatly involved in the climax of the King Arthur movie.  The steamer will travel down the lake passing the ancient castle of Baron Lyulph where Sir Eglamore, a knight of the Round Table lived. 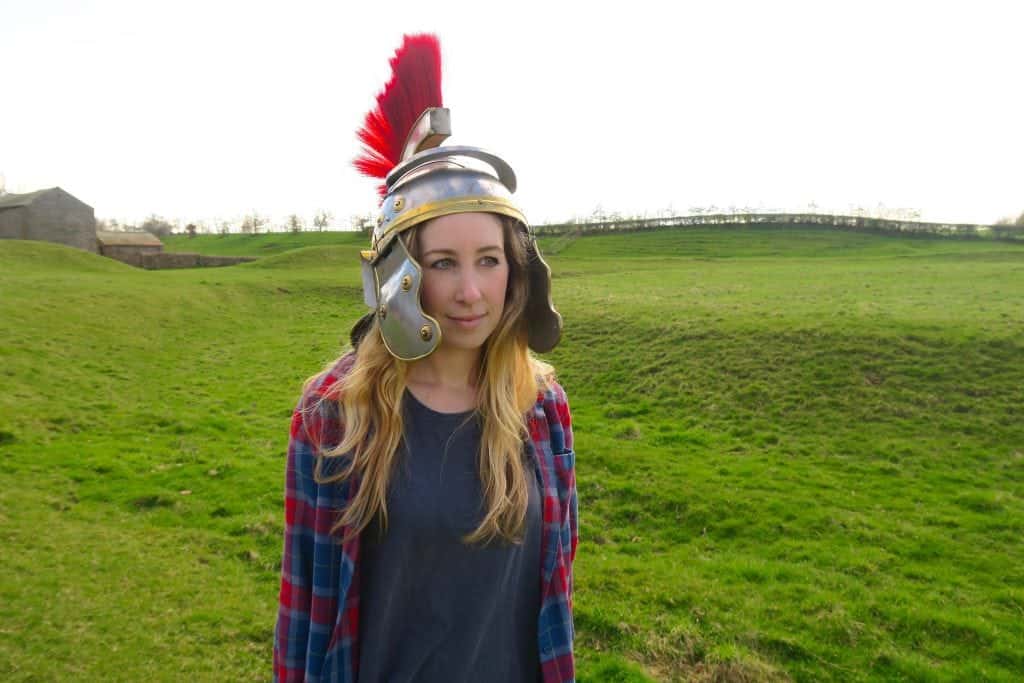 Who else is with me here and thought that the round table was an old ruinous building with medieval looking table and chairs?  Because that is what I was expecting upon arrival and moronically started taking photos of a building on the edge of the site (you can actually see which one I’m talking about in the above photo) until I was informed that this large grassy area I was standing on is actually what is considered to be the spot of King Arthur’s round table.  Here you will find a low circular platform surrounded by a wide ditch and earthen bank, a layout characteristic of prehistoric henges.  It was most likely a meeting spot during the Neolithic period, dating from 2000 BC, for kings like King Arthur to discuss important matters as the location is right on the border of England and Scotland.  Toward the back of the round table is an outline of elevated stadium seats etched in the grass that were probably used for King Arthur’s jousting arena. 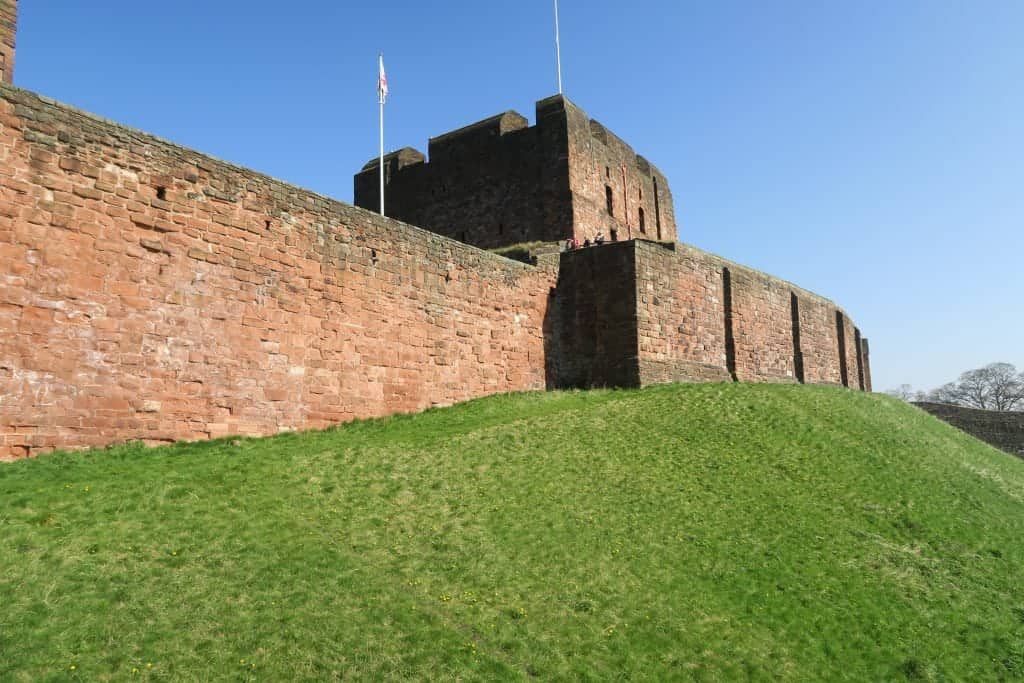 The city of Carisle is rumored to be King Arthur’s camelot or headquarters, and where better a place for the site of camelot to be held than at Carlisle Castle?  Because of the proximity of the castle to the Anglo-Scottish border, Carlisle Castle is known for being the most besieged castle in Britain.  Mary Queen of Scots was even a prisoner here for a few months!  It was also headquarters for the King’s Own Royal Border Regimen until 2006.  The castle is open to the public from 10:00 PM to 6:00 PM from April 1st to September 30th and costs about 7 pounds for a ticket.  Check the website for opening dates during low season. 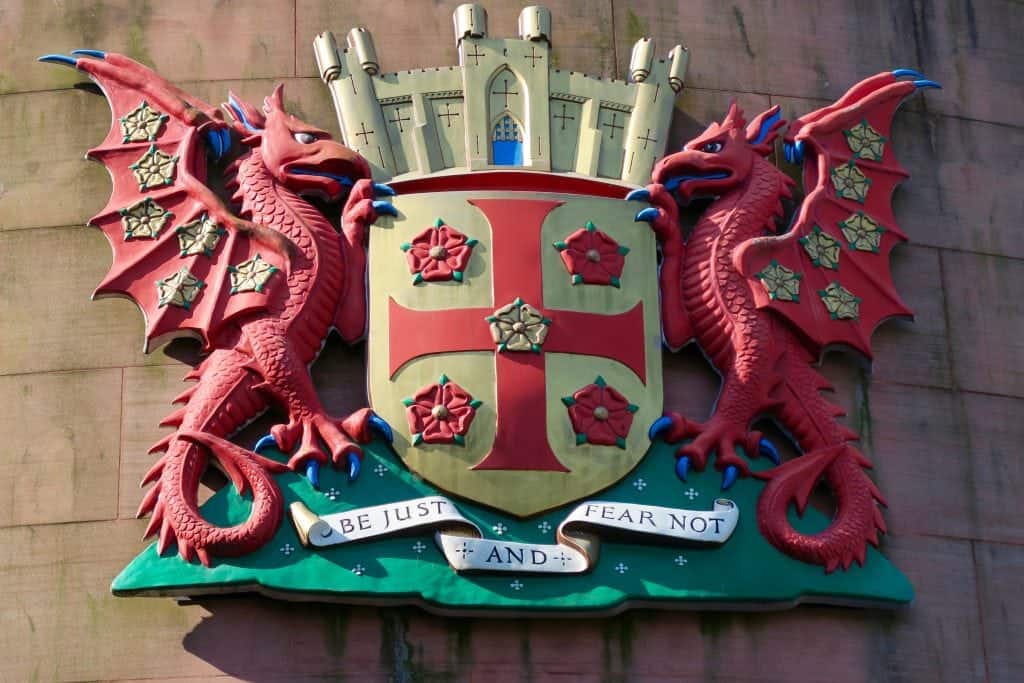 Please let me know what you thought of the King Arthur movie in the comments below, I can’t wait to hear!  And be sure to check out my post on How To Stay In A Castle Hotel in Britain, because it is an absolute must-d0 when you visit the UK.

I visited Wales and Cumbria with Visit Britain in conjunction with the #omgblegends campaign for the upcoming King Arthur movie. As always, all opinions are my own.