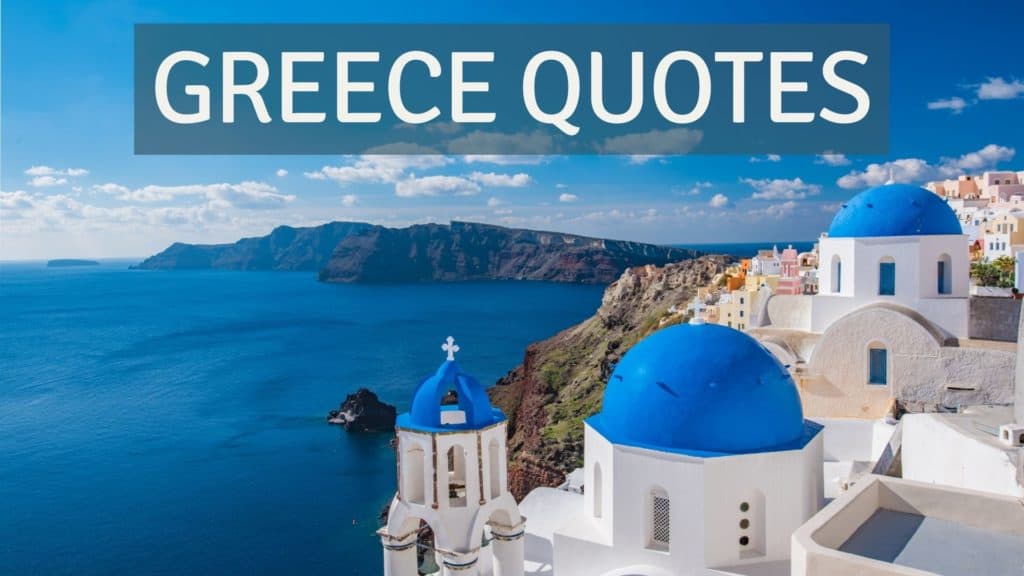 Are you traveling to Greece and looking for some inspo? Or maybe you just returned from your trip and are missing the turquoise blue waters, whitewashed roofs, and large blocks of feta cheese on your Greek salad. Whatever the reason, these Greece quotes and Greece captions are a perfect way to share your trip experiences on social media, or just straight up reminisce about that glorious time where you were driving a quad around an island chasing sunsets.

If you haven’t yet left your trip, make sure to check out all the rest of my posts about Greece including this 10 day Greece itinerary to Athens, Santorini, and Mykonos. Now, let’s get into these quotes about Greece!

1.“The light of Greece opened my eyes, penetrated my pores, expanded my whole being.” – Henry Miller

2. “Greece is a good place for rebirths.” – Judith Martin

3. “It takes a lifetime for someone to discover Greece, but it only takes an instant to fall in love with her.” – Henry Miller

4. “Greece appears to be the fountain of knowledge; Rome of elegance.” – Samuel Johnson

5. “Greece was a muse. It inspired creativity in magical ways that I can’t even begin to understand or explain.” – Joe Bonamassa 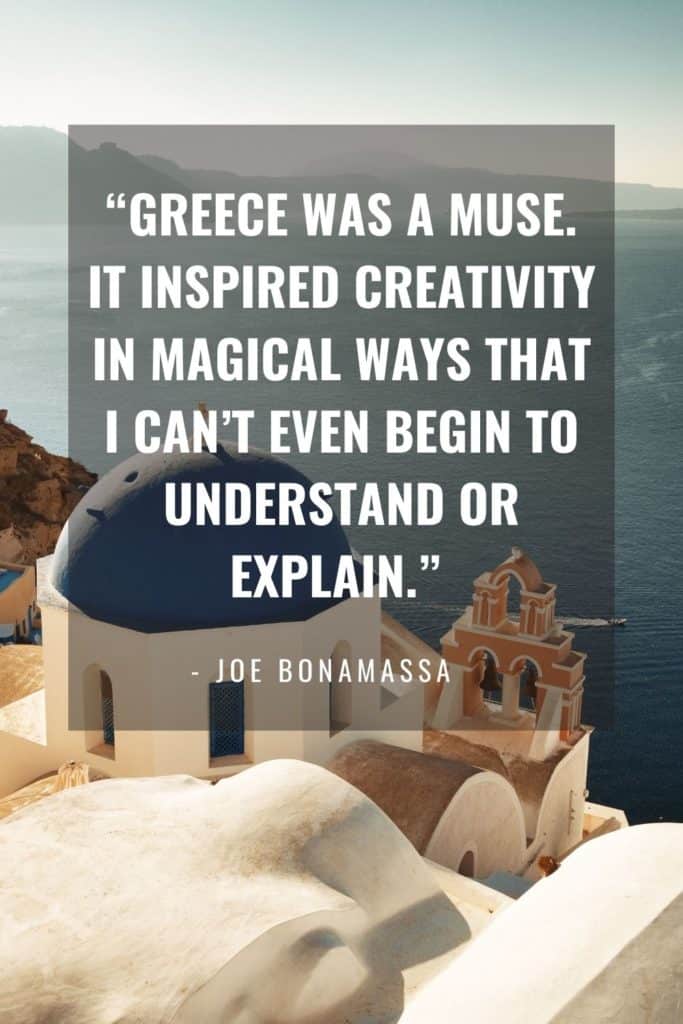 6. “The world is the expanding Greece and Greece is the shrinking world.” – Victor Hugo

8. “The problem with Greece is that she’s just too beautiful.” – Dimitra Tzanos

9. “Happy is the man, I thought, who, before dying, has the good fortune to sail the Aegean sea.” – Nikos Kazantzakis

10. “I want to see the Parthenon by moonlight.” – Daphne Du Maurier

11. “In many ways we are all sons and daughters of ancient Greece.” – Nia Vardalos

12. “Greece has got something like 1,400 islands. There is so much of Greece you can’t know even if you’re Greek. It’s sprinkled out all around the edge of the Aegean, all over the place. It’s already a secret place wherever you go, even if it’s somewhere huge like Athens or Corinth. The place enchanted me.”  – Joanna Lumley

13. “We are all Greeks. Our laws, our literature, our religion, our arts have their root in Greece.” – Percy Bysshe Shelley

14. “On a summer night, I have sat on the balcony drinking Ouzo, watching the ghosts of Greek Heroes sailing past, listening to the rustle of their sail cloths and the gentle lapping of their oars.” – Phil Simpkin

15. “In a way, it’s nice to know that there are Greek gods out there, because you have somebody to blame when things go wrong.” -Rick Riordan

16. “Her dress sparkled like the stars that blanketed the Mykonos night sky.” – Anthea Syrokou 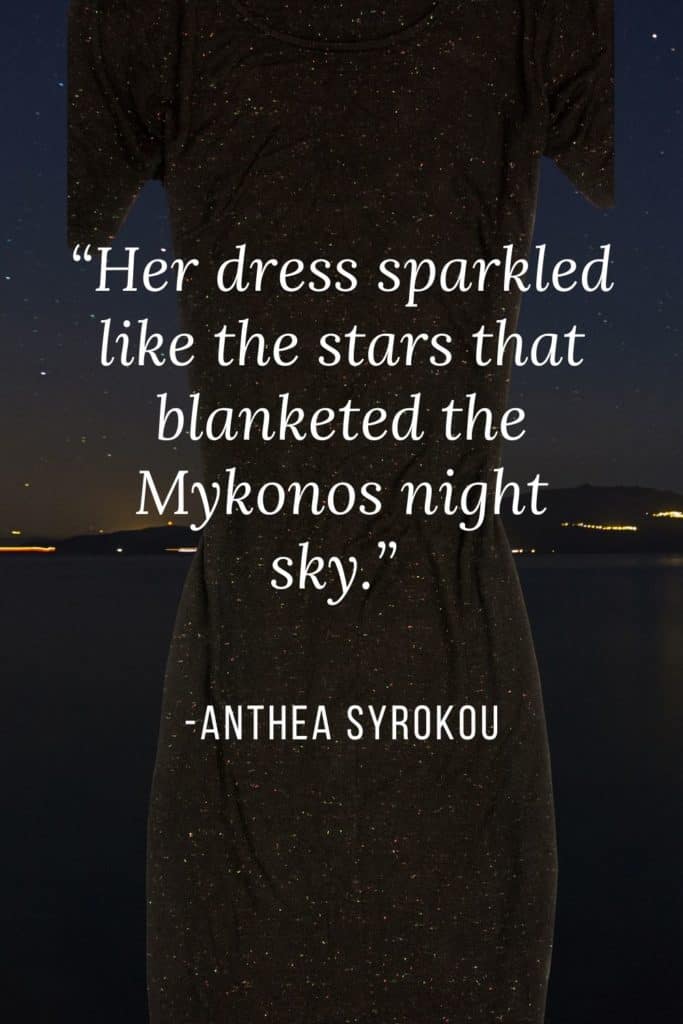 17. “Greece – The feeling of being lost in time and geography with months and years hazily sparkling ahead in a prospect of inconjecturable magic – Patrick Leigh Fermor

19. “I want to have an ‘Eat, Pray, Love’ experience where I drop off the face of the planet and move to Greece.” – Jennifer Hyman

20. “Get ready for wine, raki, and getting hand-fed by strangers.” – Anthony Bourdain

21. “Athens, the eye of Greece, mother of arts and eloquence, native to famous wits.” – John Milton

22. “The center of Western culture is Greece, and we have never lost our ties with the architectural concepts of that ancient civilization.” – Stephen Gardiner

23. There are two kinds of people. Greeks, and everyone else who wish they was Greek. – My big fat Greek wedding

24. “In every island of the Aegean Sea are found abundant traces of a vast prehistoric empire.” – James Theodore Bent

25. “Earth proudly wears the Parthenon as the best gem upon her zone.” – Ralph Waldo Emerson

26. “According to some theories, the legendary Atlantis said to have sunk beneath the sea in a great cataclysm, is in actuality the Greek Island of Santorini.” – Laura Brooks

27. “If you go back to the Greeks and Romans, they talk about all three – wine, food, and art – as a way of enhancing life.” – Robert Mondavi

30. All Rhodes lead to Greece

32. Arrived in the land of ouzo and gyros 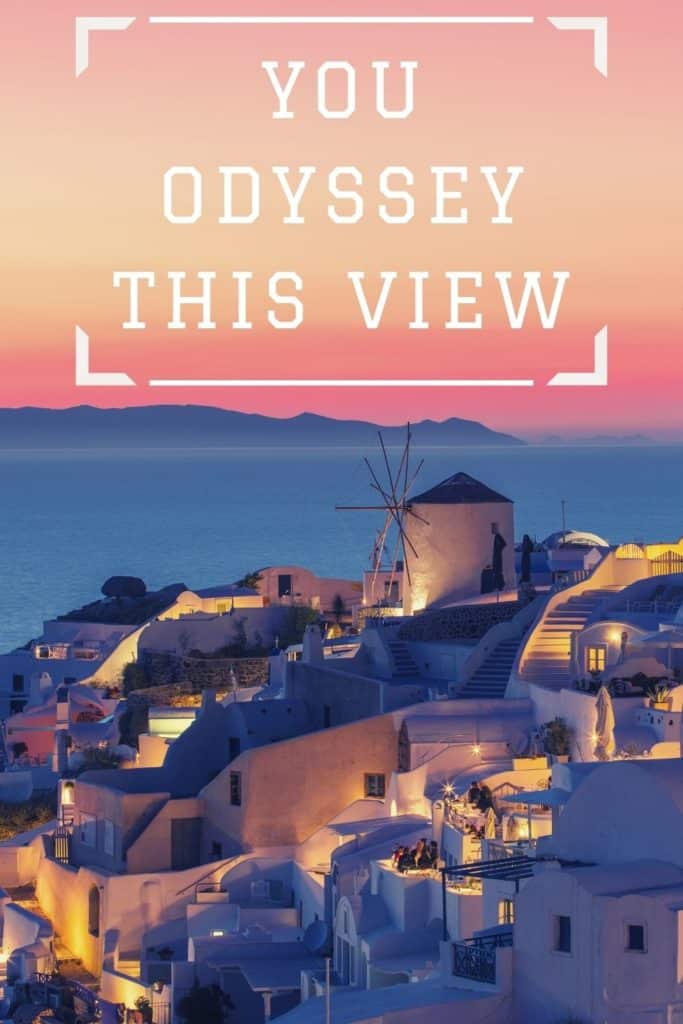 37. The city just ouzos with charm

38. So many blue-tiful views in Santorini!

40. Just getting some fresh Ares

42. My Apollo-gies for the cheesy puns

44. Greeking out over these views 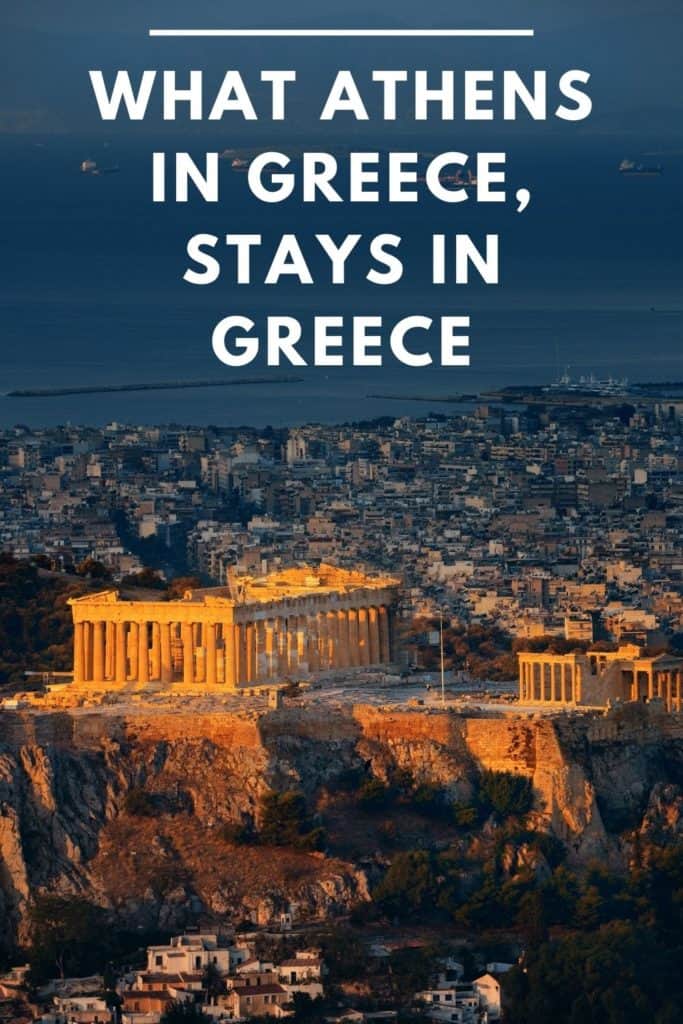 Sisterhood of the Traveling Pants Quotes

54. “She perched on her windowsill, gazing at the lurid sun soaking into the Caldera, trying to appreciate it even though she couldn’t have it. Why did she always feel she had to do something in the face of beauty?”

55. “There was a mysterious chasm between this island and the greater world, just like there was between old and young, ancient and new.”

Quotes from the Durrells

56. “Gradually the magic of the island [Corfu] settled over us as gently and clingingly as pollen.” – Gerald Durrell, My Family and Other Animals

57. “My childhood in Corfu shaped my life. If I had the craft of Merlin, I would give every child the gift of my childhood.” – Gerald Durrell, My Family and Other Animals

58. “Travel can be one of the most rewarding forms of introspection.” – Lawrence Durrell

59. “A city becomes a world when one loves one of its inhabitants.” – Lawrence Durrell

Read More: The Best TV Series to Watch if You Love European Travel

61. “Knowing yourself is the beginning of all wisdom.” -Aristotle

63. “Friendship is a single soul dwelling in two bodies.” -Aristotle

64. “In all things of nature, there is something of the marvelous.” -Aristotle

65.  “Experience, travel – these are an education in themselves.” -Euripides 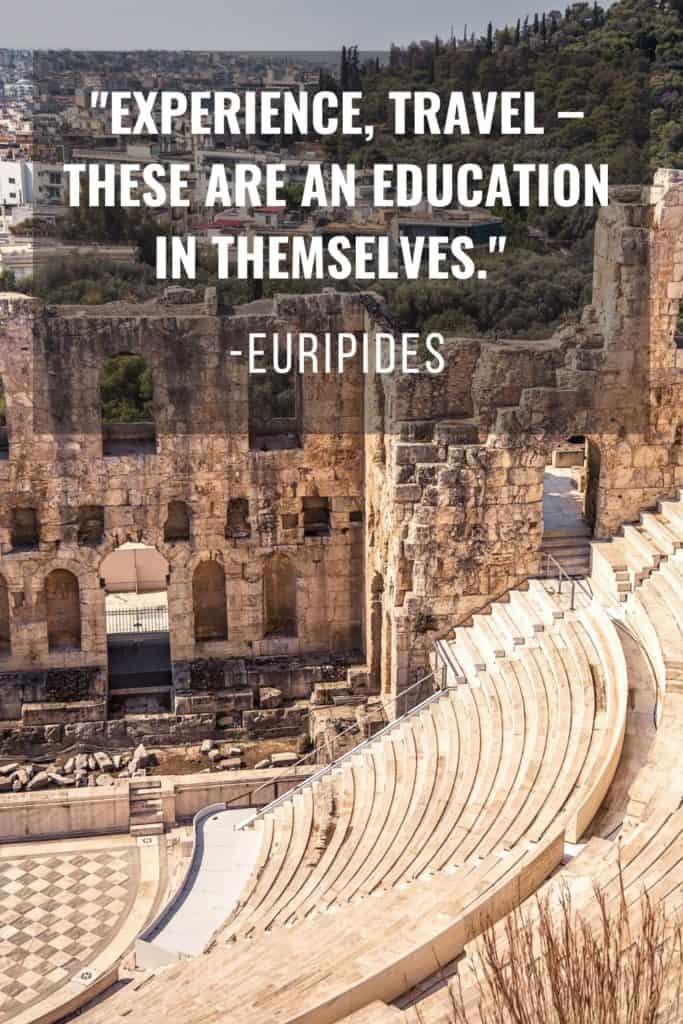 66. “I can’t teach anybody anything. I can only make them think.” – Socrates

69. “You don’t develop courage by being happy in your relationships everyday. You develop it by surviving difficult times and challenging adversity.” – Epicurus

70. “There is nothing permanent except change.” – Heraclitus

What were your favorite Greece quotes and captions on this list?  If you have your own favorite quotes about Greece, please share them in the comments below! And don’t forget to check out these other posts on WOAW!

35 Awesome Sea Quotes and Captions You Should Read