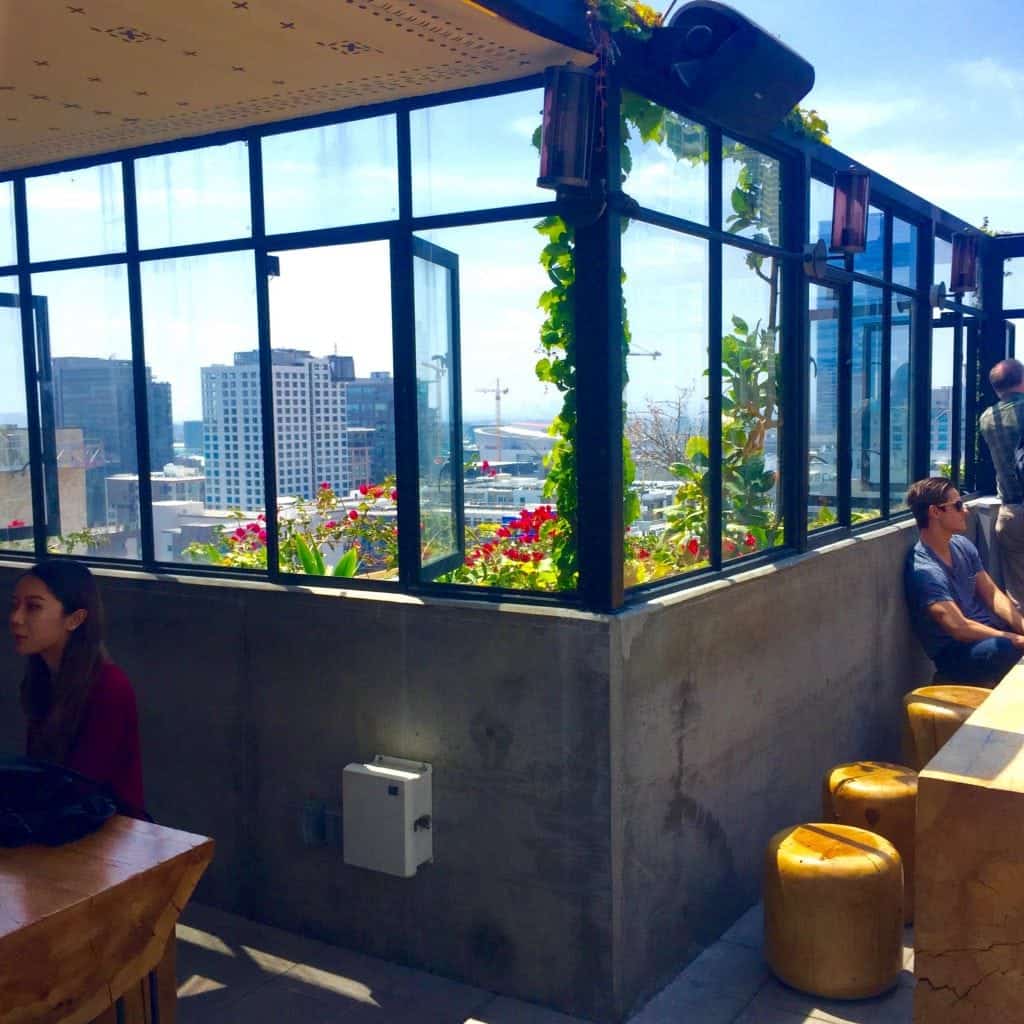 Where to Eat in Downtown LA

Downtown LA has become a mecca for cutting-edge chefs to open up new restaurants.  And, that is why the food here is some of the best and most innovative in Los Angeles.  Downtown Los Angeles still has somewhat of a negative stigma associated with it; however, if you actually spend time downtown whether it be after a LA Kings game or a visit to the Broad, you will come to love the grittiness of the streets and the incredible restaurants and bars that have opened up all over the area.  Downtown LA has become my favorite part of LA because it is actually walkable (where else does that happen in LA!) and because it truly has a bustling city lifestyle.

Here are some of my favorite restaurants in downtown: 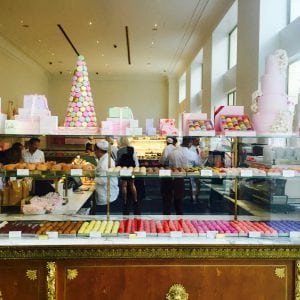 A massive restaurant with 255 seats and over 13,000 Yelp reviews, it opened in 2009 and was one of the first big restaurants to really create this culinary love fest in DTLA.  Bottega was one of the first restaurants to open on 7th street and because of the rapid expansion of restaurants and bars on this particular street, developers and chefs around the world are now calling this area the “7th Street Renaissance.”   My food recommendation?  The lasagna.  I am not even a huge fan of lasagna but wow is it good!  And, since Bottega is an Italian restaurant with a a French patisserie, you can’t leave without at least trying two of the macaroons.  Another great and unique pasta choice?  The trenne pasta with braised beef rib, Tuscan black kale, carmelized onions, and shaved Parmesan.  Unfortunately, they don’t take reservations so take that into account when you decide on Bottega Louie because the wait time can get long. 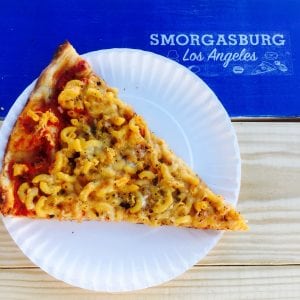 Why do they only have mac and cheese pizza on Sundays??  That makes me sad because they are also only open from 5:00PM-10:00PM on Sundays so the hours are insanely limited.  That being said, I think it is totally worth it to schlep down here for two of the greatest foods ever invented all in one.  Mac and cheese pizza!  Plus, they have $2 slices on Tuesday and day old slices for $1 if you’re looking for a cheap eat.  Update:  Pizzanista! is now at Smorgasburg LA which is a humungous market on Sundays with all that trendy food like ramen burgers and raindrop cakes that you have seen on your New York friend’s Instagram a million times.  The best part?  Mac and cheese pizza all day!

I am not an adventurous eater by any stretch of the imagination.  So when I come to Wurstkuche, I get a plain old bratwurst.  Now that would be a total shame for a lot of people because Wurstkuche specializes in unique sausage combinations such as rabbit and pork or rattlesnake and rabbit with jalapeño pepper sausage.  So sorry vegetarians!  They also have an extensive beer and french fry selection.  Wurstkuche is great for larger groups as you sit at long tables, almost like at an indoor beer garden minus the garden of course. 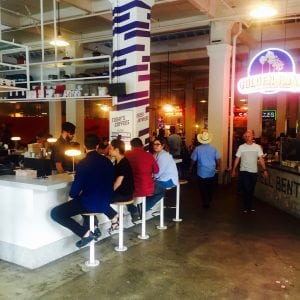 Who doesn’t love an open marketplace?  And in the land of farmer’s markets, Grand Central Market is one of a kind in Los Angeles.  Which is also why it’s so great that the market just opened up their summer nights program.  GCM will be open until 10:00 PM every night and they will have various events at night such as DJs and live music every Friday, Saturday, and Sunday, movie Wednesdays, trivia Tuesdays  and Drag Queen bingo on occasion.  It’s come a long way since opening up in 1917 and the best part is that Grand Central Market combines the old with the new perfectly.  While I have still yet to try every vendor at Grand Central Market, here are some of my favorites (restaurants 5-7) when you undoubtedly get overwhelmed by the large variety of options:

I am a sucker for all kinds of cheese, so this clearly puts DTLA cheese at a huge advantage.  That being said, their manchego potatoes are incredible.  Plus, their staff is super knowledgable so when I take brie cheese home to gorge on later, they help make sure I get the tangy, moldy flavor as opposed to a double or triple creme flavor. 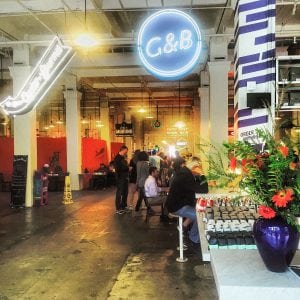 Unless you come here at the most random time of day (maybe like 3:47 PM?) expect a very long wait to order your “slut.”  This consists of a cage-free coddled egg on top of a smooth potato puree, poached in a glass jar, topped with gray salt and chives, and served with slices of baguette.  Even the menu description sounds super sexy.

If you casually walk by this vendor, you will instantly be handed the most amazing free sample of your life…and sample is a total understatement because they actually give you a carnitas taco filled with the most delicious, moist, and tender carnitas you have ever had.  You probably shouldn’t even attempt to get anything else at Las Morelianas which opened in GCM in 2008 because the carnitas are just that good. 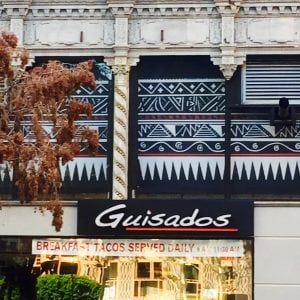 A delicious taco joint that originally opened in Boyle Heights in 2010, but has since expanded to multiple locations all equally as good as the original.  They describe their tacos as “traditional homestyle braises on fresh handmade tortillas,” so realistically how can they not be good?  For first timers, you have the option of getting a sampler of 6 mini tacos for approximately $7.25.  One of the locations is right next to Dodger Stadium, so it’s perfect for lunch of dinner before the game!

A laid-back restaurant/bar serving Mediterranean style dishes in Little Tokyo, it is a great casual spot to enjoy their street car fries.  Man, they are so good!  The fries are topped with garlic aioli, feta cheese, onions, green pepper, tomato, olives, and pepperoncinis and you have the option of adding your choice of meat at an additional cost. Dare I say these fries are better than animal-style fries from In N Out?  I think so!

In all my excitement talking about how much I love Downtown LA with everyone I meet, I was introduced to Avital Tours and was super excited when they invited me on their Downtown LA food tour.  Avital Tours is a hugely popular food tour company in San Francisco and luckily, they recently brought their talents to Downtown LA and Venice.  I expected to have fun on the food tour, I mean I would be eating for three hours straight, how could I not?  However, I did not anticipate just how awesome the tour would be.  Not only did we eat at four spots in Downtown LA that I had never been too ( even after working downtown for two years), but they also talk about the history of Downtown LA and how it became this epicenter for culinary experts.  One of the most unique aspects of the tour was that we also learned the background of each eatery and had the opportunity to meet the chef or go behind the scenes at each spot.  I had always imagined that a food tour would be a fun sightseeing activity to do in a foreign city.  However, after spending time exploring my own city, I think it makes even more sense to do a food tour in your native city.  That way, you can actually return to the places you visit on the tour multiple times! You can book the tour directly on their website and they currently do tours Thursday-Sunday in Downtown LA.  Here are the four restaurants that I went to on the tour.  All of them were truly spectacular. 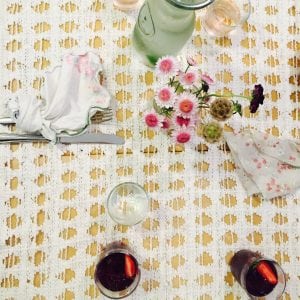 This Brazilian restaurant was established in 2006 and has the cutest decor that was hand picked by the chef, Natalia.  I don’t want to give too much of the history away, but I will say that we had a sample plate of kibe which is bulgur wheat, mint, and ground beef, along with a shrimp croquette and a delicious cheesy bread.  We were also served a glass of sangria and there was a pitcher of naturally-flavored cinnamon water on the table.  Talk about some unique touches! 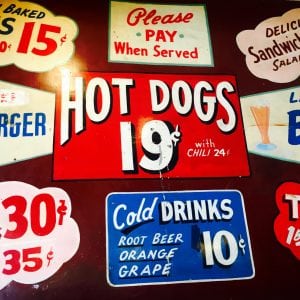 The originator of the maple-glaze doughnut as well as many other popular treats, Nickel Diner has become a highly publicized restaurant after being featured in Los Angeles magazine and Diners, Drive-ins, and Dives.  We were served pozole and I was the only weirdo who had never heard of it before.  I quickly became a massive fan of this spicy chicken soup with avocado, cilantro and lime.  Plus, they still have the original menu on the wall which is absolutely adorable! 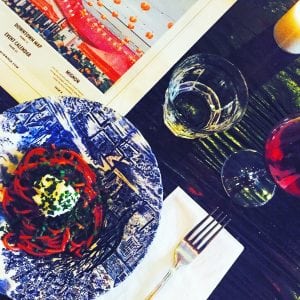 Ok guys, this is where things get real.  Cento Pasta Bar is a pop up eatery located in Mignon restaurant and serves the most incredible pasta and delicious wine.  I eat pasta every single day of my life and I had never had such good pasta before besides the pesto pasta in Cinque Terre.  The pasta we tried was a beet spaghetti pasta with fresh goat cheese and poppy seed.  After consuming every last bite, I was feeling sad because I figured Cento had some sort of price fixe menu with a minimum of $75 a person.  And I am hear to report that I was completely wrong.  The pastas start around $9 and the wine starts at $6!  Incredible right?!  Because they are a pop up, the hours can be funky so double check on their Instagram for details @centopastabar. 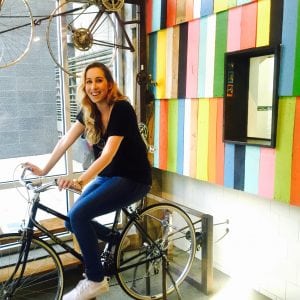 An ice cream shop in downtown LA that “produces high quality artisan bicycle-churned organic dairy and non-dairy ice cream” and fantastic homemade waffle cones.  The shop’s emphasis is on sustainability and social and environmental causes, so if that is important to you, come here to get your ice cream.  Also, you could just come because the ice cream here is incomparable to other ice cream shops.  Plus, if you ride the bike for 20 minutes to churn the ice cream, you get a free scoop!

Are you on Pinterest? Pin these LA Eats for later! 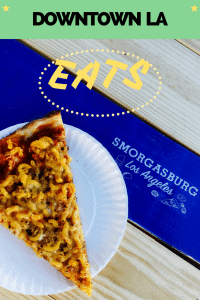 Heading elsewhere along the coast? Check out some of my other posts for more of that Cali lifestyle!

LA Favorites: The Most Fun Activities in Los Angeles

The Most Unique Places to Stay in Amsterdam
California, United States
[social_warfare]